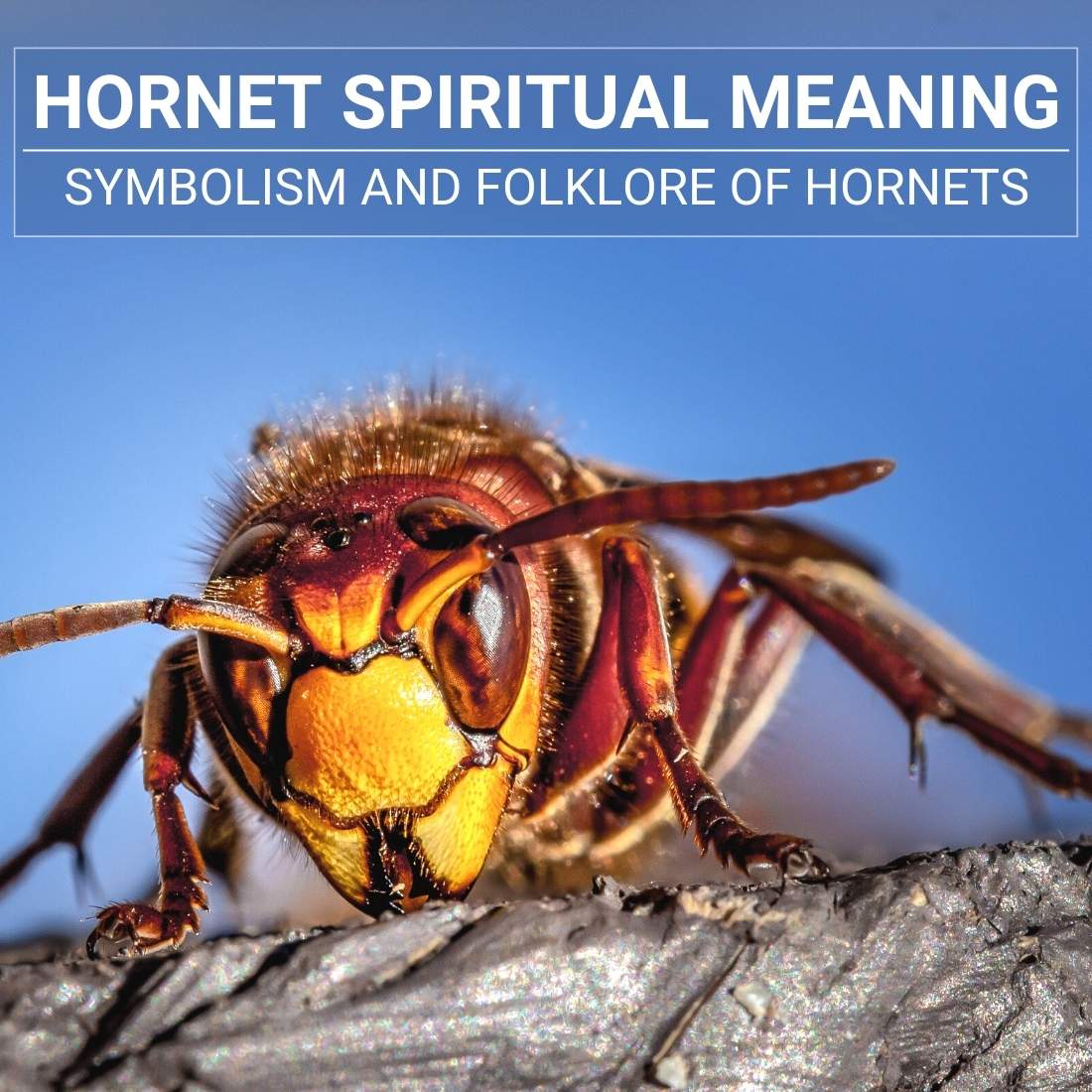 A Sting With Meaning – Hornet Symbolism

In this blog post, we will explore the hornet’s spiritual meaning and discuss some of the interpretations of its sting. We will also look at some of the hornet’s most famous appearances in mythology and folklore.

“A slander is like a hornet; if you cannot kill it dead at the first blow, better not to strike at it.”

What do hornets symbolize?

Hornets have a powerful sting that’s feared by most people, and they’re often considered a pest. But, these yellow-electric insects also symbolize vitality, life’s sweetness, and the need to be cautious. Here are the top three spiritual messages of the hornet.

Hornets are a delicacy in Japan. Their larvae produce a sweet substance that worker hornets eat for energy.

When a hornet appears, it’s a reminder of the importance of taking care of your energy and your vitality. If you’ve felt stagnant lately, try introducing some physical fitness into your life.

Remember to appreciate and feel gratitude for your life’s wonderful people, places, and experiences. Certain hornets, such as the bald-faced species, eat a diet consisting only of nectar and fruit juices. Because of their taste for sweets, a hornet symbolizes the need to appreciate life’s sweetness.

Many people fear a hornet’s sting, believing they will unleash their stinger on a whim. In actuality, a hornet only uses its stinger if it’s been provoked or attacked. They are actually not as aggressive as one might think.

This insect teaches you to proceed cautiously while moving forward, you may not be aware of what’s waiting around the corner.

The hornet also encourages you to reflect on your actions. Certain choices affect more than just you, and you may currently be unaware of how you’ve affected someone or something in your life recently.

The hornet as spirit guide and animal totem

A spiritual guide provides you with guidance and wisdom, while an animal totem is a specific animalistic energy that lives within an individual.

As a spirit animal, the message of the hornet teaches you how to use your ambition to achieve your goals. Hornets are consistent, determined creatures, and they help guide you towards tackling your dreams.

The hornet also teaches you the importance of community. Hornets live in large colonies, and they work together to build their nests and care for their young. They are also fiercely protective of their homes and will attack anyone or anything that threatens their nest.

As an animal totem, you may be a high-energy person often seen “buzzing” around throughout different hobbies and interests. You are a very determined and strong-willed individual who has the confidence to protect and defend yourself against the opposition.

If the hornet is your totem animal, it could also mean that you are a strong and protective person. You are someone who stands up for what you believe in and is always there for your family and friends.

Hornets also have a dark side, which is important to remember. They can be aggressive and dangerous, and they should not be taken lightly.

With a strong hornet personality, you can also be a guide for others. You show them the importance of being cautious and reflecting on their actions. And you remind them that some choices can have a bigger impact than they realize.

“The wing structure of the hornet, in relation to its weight, is not suitable for flight, but he does not know this and flies anyway.”

The hornet symbolism in different cultures

The hornet is found in North America, Russia, Europe, and North-eastern Asia. Now, let’s explore how these insects have appeared throughout many instances in different cultures and the symbolism of their presence.

The bible references God promising to provide his followers with an “aide” to fight off a group of their enemies. The Hebrew word used often translates as “hornet,” insinuating that God gave his people hornets as a form of protection.

Hornets may also have been a symbol of disease, and God was promising to bring disease and suffering to their enemies.

It’s believed that the hornet was a symbol of fear, panic, or dread back in those ancient times. Some believe that hornets in the bible were in reference to the Egyptian army, who wore yellow and black clothing.

The Hindu Goddess, Bhramari, is often referred to as the Goddess of black bees.’ This is in association with hornets, wasps, and bees. In religious imagery, the Goddess is depicted with four hands covered in hornets and bees.

She first appeared as a Mother Goddess and was called upon for protection in an extraordinary battle. The Mother Goddess manifested onto the earth and used her powers to summon protective insects, such as wasps and spiders. These insects merged within her being, and she was then incarnated into the Goddess Bramari.

The Goddess of black bees also has a breathing Hindu breathing technique. The process involves creating a humming sound with your breath that mimics the buzzing of a hornet or bee.

An old Cherokee legend involving hornets originated in North America. The legend refers to an ancient time when people asked the Creator to send them something sweet from the earth. Thus, the bee was created, intended to build hives and harvest honey for people to eat.

The people enjoyed honey so much that they began planting flowers all over in hopes that the bees would provide them with more of the delicious substance. Soon after, the bees became tired, and the people became greedy.

To remedy the situation, the Creator blessed bees with a stinger and the ability to defend themselves. Because of the hornet’s association with the bee, they were also blessed with the ability to protect themselves as well.

“The mad mob does not ask how it could be better, only that it be different. And when it then becomes worse, it must change again. Thus they get bees for flies, and at last hornets for bees.”

A hornet sting is often very painful, resulting in an uncomfortable welt and sometimes an allergic reaction. If you’ve ever experienced a hornet sting, there may have been a spiritual meaning to this occurrence.

According to Shunichi Makino, a researcher at the Japan Forestry and Forest Products Research Institute, Asian giant hornet stings cause excruciating agony that compares to being “stabbed by a red-hot needle.”

A hornet sting symbolizes the need to gain control over your impulses. Most hornets won’t sting you unless they’re provoked, yet people instinctively turn to swat them away, causing them to feel threatened.

You can use this symbolism in your own life to recognize any actions or choices you’ve made out of impulse or instinct that may have resulted in a negative outcome or danger. Use wisdom and allow yourself to consciously make decisions rather than out of reactivity.

Is seeing a hornet a bad omen?

Some cultures believe that seeing a hornet is a bad omen. I heard of people thinking that someone will die soon when they encounter a hornet.

If you see a single hornet flying around, it could mean that you’ll receive some type of punishment or misfortune. You should avoid stepping on a hornet because doing so could cause you harm.

However, in most cases, a hornet sighting is not a cause for alarm. But if you are someone who believes in omens, then you may want to take heed if a hornet crosses your path.

However, if you see a swarm of hornets, it could be a good sign. It means that the person will live long and prosper.

If you see a single hornet flying around, it could mean that you’ll receive some type of punishment or misfortune. You should avoid stepping on a hornet because doing so could cause you harm.

What does it mean to dream of hornets?

Some believe that hornet dreams represent anger, rage, and aggression. Others believe that hornets are a sign that danger is near. If you dream of hornets, pay attention to the context of the dream and your feelings in the dream. This will help you determine what the hornets mean to you.

Stung by a hornet in a dream

If you dream that a hornet stung you, it may mean that someone is threatening you or that you are in danger. Alternatively, this dream may be a warning to watch your temper. If you get angry easily, try to find some constructive ways to release your anger instead of lashing out at others.

If you dream of a hornet’s nest, it may represent some hidden anger or rage that you are holding onto. Alternatively, this dream may be telling you to watch out for someone who is angry and dangerous. Pay attention to your gut instincts and beware of anyone who seems overly aggressive.

What does it mean to see a hornet in the house?

If you see a hornet in your house, it may be a sign that things are going to get heated. There may be some conflict in your home or family. Alternatively, this dream may be a warning to watch your temper. If you tend to get angry easily, try to find some constructive ways to release your anger instead of lashing out at others.

The dead hornet is a sign of transformation, and it may be telling you that it is time to let go of something or move on from a situation. Use the bold strength of the hornet to help you through this transition—it will be worth it!

On the other hand, a dead hornet could also be a sign of danger. If you see a dead hornet in your dream, be on the lookout for someone who is angry and dangerous. Pay attention to your gut instincts and beware of anyone who seems overly aggressive.

The hornet is a misunderstood creature that’s not as ferocious or impulsive as many believe it to be. While they do hold the ability to sting you fiercely, they only do so as a means of protection.

This insect teaches you to control your impulses, appreciate life’s sweetness, and embrace vitality and wellness. The next time you see a hornet buzzing around, take a moment to reflect on why it may have appeared within your life at that moment.

Do hornets do anything positive?

Hornets may not be the most popular insect, but they do serve a purpose. Hornets are predators of many pests, including flies, mosquitoes, and other small insects. So hornets can actually help to keep the insect population under control.

They are also important pollinators. Hornets visit flowers in search of nectar, and in the process, they help to pollinate plants. This is especially important for crops and agricultural plants.

What to do if you see a hornet?

If you see a hornet, the best thing to do is to leave it alone. Hornets are not naturally aggressive and they will only sting if they feel threatened. So unless you are provoking the hornet, there is no need to worry.

Of course, if you are allergic to hornet stings, or if you see a hornet’s nest, it is best to call a professional for help. But for the most part, hornets pose no threat to humans, and they can actually be beneficial to the environment.