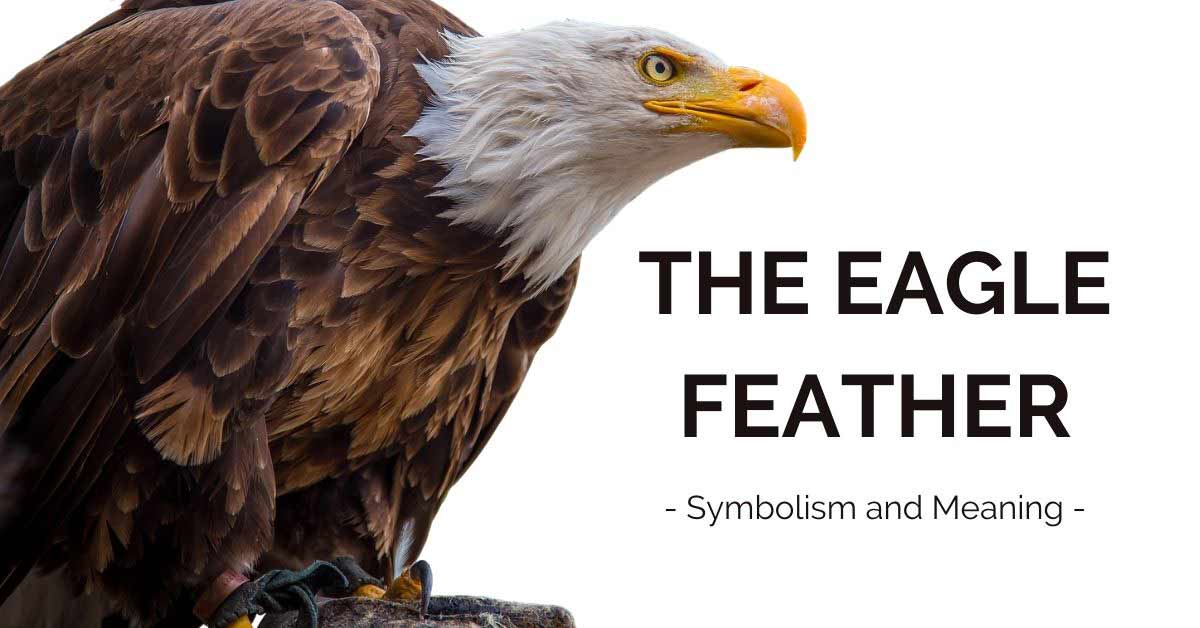 For centuries, eagles have been renowned for their strength and fortitude as a predator. From Zeus in Greek mythology to Jupiter, his Roman counterpart, they were largely seen as our connection to the immortals. Regarded with the utmost reverence, these majestic birds are often associated with soaring high in the skies, possessing keen eyesight, as well as being deceptively evasive and powerful. Honored and considered sacred in a handful of cultures, religions, and traditions, let’s comb through the varying interpretations of the eagle feather meaning.

In general, understanding feather symbolism can be tricky but the eagle one is somewhat easier. Eagle feathers are a symbol of courage and bravery. They signify the idea that you have to be strong in order to overcome your challenges. It is also believed that eagle feathers hold healing power, which can help people who have been hurt emotionally or physically heal themselves. These incredible beliefs make them a meaningful part of Native American culture and society – both historically and today!

Treated with great care and respect, eagles are recognized as a representation of honesty, courage, strength, wisdom, and freedom. With a wingspan that impressively stretches up to 7 feet, they are known to have the ability to climb to about 10,000 feet and soar for hours using their often black plumage. Consisting of thousands of feathers that are light yet extremely strong, these layers serve as their protection from the rain and are greatly utilized by these awesome birds for insulation against the cold.

Rounded at the tip and spread widely, the eagle’s primary feathers display amazing strength as they control the bird’s lift and directional movement, all while enduring immense atmospheric pressure. Not only do these lightweight feathers help preserve their body heat to aid them in extremely cold environments, but some of them also act as a rudder to stabilize their flight movement.

There are many different types of eagles, so the feathers will vary depending on which type it comes from. For example, bald eagle feathers have a black tip and they usually come in pairs. Golden Eagle Feathers look golden brown or yellowish-brown with white tips that can be either sticking up like antennae or down around the shaft of the feather. They also tend to have a more oily texture than other types of birds’ feathers.

While they are not exactly known to have the ability to fly as fast as some of their peers, eagles make up for such a disadvantage with endurance by soaring high above the skies for long periods. The often dark brown and white contrast in their feather’s color is highly recognizable even from long distances which helps establish and maintain a nesting territory as they assert their presence against other birds.

What Is The Symbolic Meaning Of An Eagle Feather?

Gifted with the skill to fly higher than any other bird, these marvelous creatures have long enjoyed the distinction of being man’s connection to the divine. Bearing the messages and powers from the realm of the spirits, the presence of an eagle provides us with the courage and freedom to look ahead and move forward. A known solar symbol with links to a plethora of powerful sky Gods, this imposing bird conveys the importance of being truthful and honest, as well as guardianship, loyalty, and inspiration.

As a symbol of tremendous and remarkable principles such as respect, courage, and humility, our ancestors strongly believed that there was a special connection between these magnificent birds and our Creator. In various cultures, to be awarded an eagle’s feather is a huge honor. It encourages us to reveal and be proud of who we really are, holding it high towards the heavens yet close to both our hearts and spirits.

Given the immense responsibility of ferrying messages from us to the heavens, it has been widely recognized that wearing or bearing an eagle’s feather causes gods to immediately take notice, as it honors them in the most humble yet in the highest way.

The feather, having two sides, represents balance and is our constant reminder of staying in touch with contrasting principles and beliefs such as the concept of what is right and wrong, as well as life and our eventual death. Known to be a symbol of optimism, power, and companionship, the eagle feather serves as our guide and protection as we go about our daily lives, easing our fears, getting rid of confusion, and allowing peace to settle in.

The Significance Of The Eagle Feather In Native American Culture

Many tribal nations put natural symbolism in high regard. From feathers to animal teeth and blood, Native American culture tells us about a great connection between the owner of the feather, the bird from where the plumage came from, and our spirit guides. Admired, appreciated, and often spotted in Native American adornments, jewelry, and art, even just the feather of this fascinating winged creature harbors enough power to symbolize honor, trust, wisdom, and strength.

Native American legends say the eagle is a sacred creature that represents power and strength. The Eagle feather meaning is also used during powwows to signify the importance of this animal, in addition to being featured on many ceremonial outfits throughout tribal lands.

Native Americans have been using eagle feathers for centuries. In fact, it’s believed they were one of the first animals to be domesticated by humans! The Native peoples hunted eagles because their feathers held great significance – not just as symbols but for other purposes as well. For example, these birds can also serve food when cooked properly. When hunting an eagle down (or “taking” one), tribes would traditionally give thanks with prayers and songs followed by a feast or offering ceremony among all tribe members. Some tribes would carry the feathers around with them for good luck or use them in their ceremonies.

Highly esteemed and acknowledged, the eagle’s feather is believed to carry messages that can lead our minds, bodies, and spirits towards courage, hope, and firmness. Traditionally awarded to warriors who showed bravery by leading the tribe through hunts and battles towards victory, an eagle’s feather is dutifully placed in the warrior’s headpiece to signify and reward the heroic acts that he has done. They were also given to the warrior who had killed the most enemies in a battle.

How Do You Use An Eagle Feather?

There are many ways to use an eagle feather. In Native American culture, they were used in dances as symbols of courage and strength. They were also given to the members of a tribe during times when group unity was needed. Eagle feathers can still be found today on caps or headdresses worn by tribal leaders. The feathers may also be gifted from one person to another as a sign of respect and admiration for their dedication and hard work towards something that is important to them- it signifies taking flight with each other’s help!

A common way I’ve seen people use an eagle feather is as part of traditional powwows (which are ceremonies celebrating communal values). Those who receive these gifts wear them proudly in ceremonial outfits called “Regalia” which is often composed of animal skins, feathers, and beads.

Meaning When You Find An Eagle Feather

Considered sacred in various traditions, feathers from these noble creatures can be used for ceremonial purification and healing purposes. Walking into the path of an eagle’s feather might be a reminder of your need to step back from certain situations, allowing the necessary time and space for you to arrive at an important decision. At such an occurrence, you simply need to trust that your spirit guides are watching over you, giving assurance that you are not alone and that they are leading you towards a firm and favorable choice.

Being in the presence of such a powerful animal symbol provides you with an insight into events that are about to take place. You are being directed to carefully assess the situation, trust your instincts, and listen to your inner voice for nothing can go wrong if only you would allow your spirit guides to show you the way.

While most of us see the eagle as a superior creature that rules over the skies, it is important to understand that this bird also implies success and perseverance. Being the strongest among birds, the eagle encourages you to rise above your challenges and to never give up no matter what. Typically used to adorn headdresses and jewelry, the eagle’s feather reminds us of the significance of its great power, genuine beauty, extraordinary courage, and unmatched persistence, all of which are essential in bringing about good fortune. Although legend says that an eagle showing itself to the Trojans brought them to defeat, this stunning and wondrous bird would often emerge to strengthen and inspire us to reach for even greater heights.

The eagle feather is a symbol of strength, wisdom, and guidance. It’s also representative of the spiritual realm as it connects the earth with the sky. Eagles are often seen to represent the connection between heaven and earth because they have the ability to fly high in the sky while still being grounded on Earth by its strong talons.

This could be why eagle feathers are commonly found at Native American ceremonies or when people need help connecting spiritually with their higher power. In some traditions, if you break a feather from an eagle’s wing without permission then that person will die soon after- this belief stems back to ancient times when those who hunted for food would take only what was needed which meant not harming any living creature unnecessarily including birds.