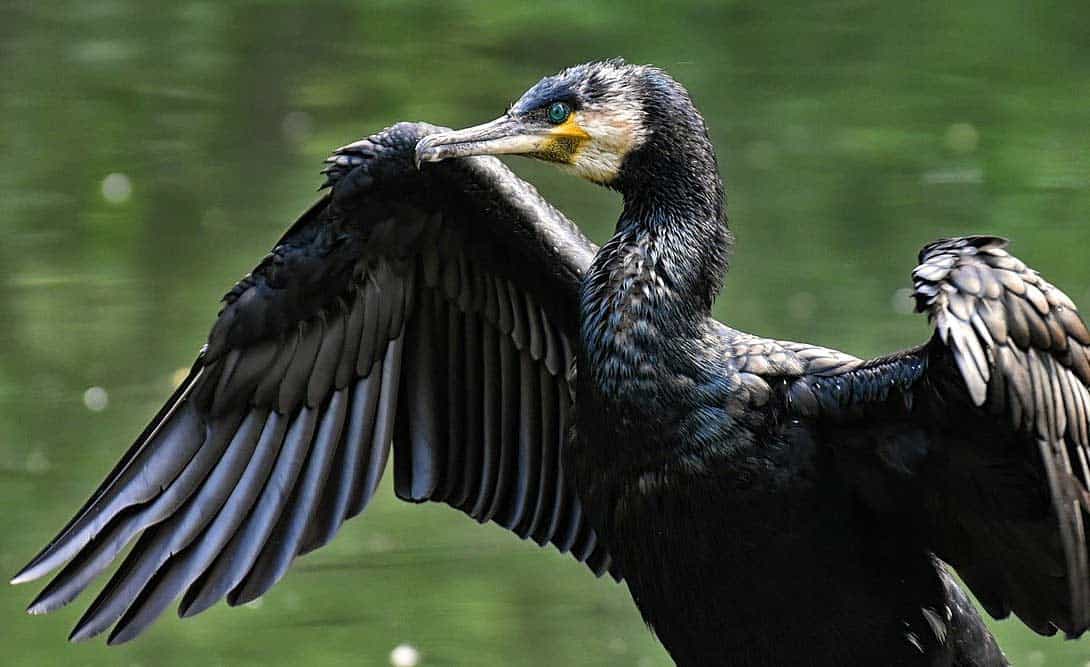 Cormorants are aquatic birds that nest near rivers, lakes, and other coastal areas. These birds are known for their long hooked bill, overlong neck, short legs, dark feathers, and four webbed toes. They are excellent hunters and can dive as deep as 40 meters to feed on fish, eels, and watersnakes. After hunting, these birds would sit on a tree to dry their feathers so that they can fly again.

A cormorant is more than just a magnificent bird because it also serves as an emblem that holds great spiritual significance in many cultures. Cormorants are one of the most widespread birds in the world, found in every continent except Antarctica. Their range is greater than any other bird species on earth and they are also some of the largest flying birds measuring up to 3 feet tall with a wingspan that can reach 6 feet. These fascinating creatures have been used as symbols for many different things over time including evil, greed, wisdom, good fortune and even luck. The ancient Greeks believed cormorants were sacred birds symbolizing Apollo’s truth-telling abilities because their beaks could see through water while submerged; this association with truth-telling has led them to represent honesty (there are many symbols of honesty) and sincerity throughout history.

This blog post will explore some of these meanings so you can see which one best aligns with your beliefs!

The cormorant is a symbol of labor, courage, and resourcefulness. In order to acquire their food, cormorants need to put a great effort by diving underwater to search for the food that they habitually eat. They know what they want and are willing to work hard to achieve their goal. To dive deep into the water also symbolizes courage for it takes a lot of strength to face unfamiliar territories. Cormorants are very clever birds and they always find ways to successfully hunt their food by overcoming all the difficulties that they encounter underwater.

A cormorant is a spirit animal that can guide a person through the challenges of life in order to attain success. If you notice that a cormorant always appears in your conversations, in movies that you’re watching, or perhaps in books that you’re reading, then that is a sign that your spirit animal is reaching out to you. Cormorant is a totem that represents triumph amidst adversities. If you have cormorant as your totem, it implies that you are a people person and that you highly value your relationships with family and friends. Keeping your family and friends together in harmony is one of your greatest attributes.

The meaning in dreams

When you see two cormorants diving together at the same time catching only one fish, it means that you will have to work with another person to achieve a common goal. Seeing a cormorant diving in the water without catching any fish means that you need to work harder to achieve your goal. Do not lose courage and keep being resourceful for your spirit animal is present to guide you in your endeavor.

If in your dream a cormorant appears sitting on a tree, this means that the process of self-realization will take longer and it will require a lot of thought and pondering.

The Cormorant is your spirit guide when…

1. … you are challenged to work hard to achieve your goal.

Stress together with other factors decreases our productivity because we lose the mental power to get things done. If you feel that you can not get your job done, the cormorant will guide you to be self-reliant and use your ability to work hard so that you can be successful in your endeavor.

2. …you lose the courage to face adversities.

The difficulties in life can diminish our confidence in braving our path to success. In times like these, a cormorant will appear to you to provide encouragement that will persuade you to face adversities.

3. …you need to be resourceful to reach your accomplishments.

It will be your spirit guide to creativity and wisdom that will help in accomplishing your goals. The totem will help you devise ways and means to work around the challenges that will come along the way.

The Cormorant is a water bird that has been used in many cultures to signify different meanings, such as wealth and prosperity. It has also been used in other cultures to represent the idea of good luck. In some ways, it can be seen as a positive symbol, while others believe it is an evil sign. The cormorant’s meaning depends on where you are from or what culture you belong to.
Some cultures believe that the cormorant was created by the gods for fishermen, but when they saw how greedy humans were they changed their minds and released them into the ocean so they could feed themselves without being caught. This story explains why people see this bird as a bad omen because if one appears on land then there.

Having a cormorant as a spirit guide will help you in enhancing your life so that you will achieve success. Our spirit animals usually appear only when we need them as they come and go. Keep in touch with your spirit animal by getting an amulet that you can carry around or by providing a sacred corner where you can place an ornament that is associated with this animal. This will allow you to have a continuous and clear guide as you go through all the challenges of life.

→ Check out our comparison: anhinga vs cormorant.