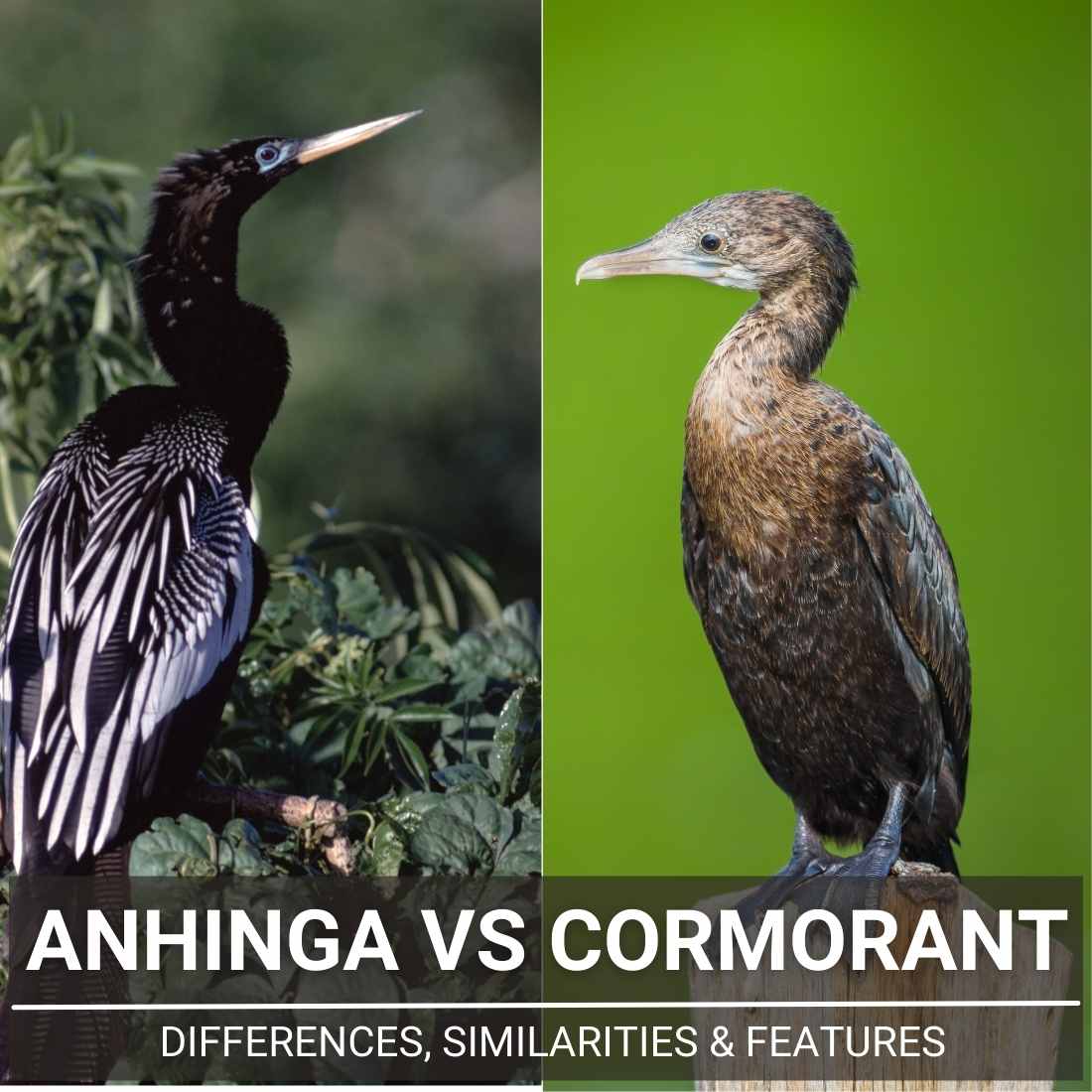 Many people mistake these two water birds because they both look alike, feed on fish and hunt below the water’s surface. But that’s not true. Anhingas love freshwater, whereas Cormorants prefer saline water.

Consider the overview given below to observe how the Anhinga and the Cormorant are different from one another.

Differences between Anhinga vs Cormorant

The Anhinga dwells in shallow, slow-moving, protected waters and takes advantage of neighboring perches and rocks for drying itself. Except during extreme droughts, it is rarely seen without access to fresh water. In general, it is seldom found in large bodies of open water, yet it may nest on the shores of bays and lakes that are easily accessible. They live in colonies with other waterbirds, such as egrets, gulls, ibises, swans, and cormorants. Anhingas may also reproduce in saltwater colonies, but they prefer freshwater. Anhingas are primarily tropical and subtropical climates.

On the other hand, Cormorants like to reside along coastlines, in bays, on ponds, and in rivers. They are highly versatile and may be found in practically any water body, from rocky northern beaches to mangrove swamps, from big reservoirs to small interior ponds. They are widespread in the United States. They build their nests in trees near or above water, on coastal cliffs, or on the ground on islands, among other places. Cormorants may be found worldwide; however, they are more commonly seen outside of North America.

Anhingas are large, black waterfowls with a long tail, a snake-like neck, and a tiny head in the wild. They have red to blue eyes and a long, olive-brown beak, which they use to catch fish. The upper back and forewings are speckled and frayed with silver-gray feathers, which look mottled and grizzled on the upper back and forewings. They frequently swoop through the air like a hawk.

On the other hand, Cormorants are tiny, long-tailed birds with black top and bottom portions and a shiny blue appearance. A yellow-gray bill with a long hooked yellow-gray tip and a yellowish “V” shaped gular pouch bordered in white distinguishes them. The color of their legs and feet is black. Their wings beat rapidly when they fly low over the water at high speed.

Anhingas are 87 cm in length on average, weigh 3.2 lb, have a wingspan of 118 cm, and have a bill that is 80-82 millimeters in length. The bird’s head is minuscule and looks to be nothing more than an extension of its long, snake-like neck and body.

Several small fishes and other aquatic preys make up most of the Anhinga’s diet, with only trace amounts of crabs and invertebrates. While swimming beneath the water’s surface, it stalks fish around aquatic plants—Anhingas spearfish by thrusting their slightly expanded bill through the fish’s flanks.

Cormorants, on the other hand, are primarily fish eaters. In the United States, adults consume on average one pound of fish per day, with the majority of that amount coming from tiny fish.  In addition to feeding on a variety of fish species, they are lazy feeders, focusing on the easiest fish to capture.

Anhingas are nocturnal and solitary in their habits; however, they may congregate with gulls, herons, egrets, and storks. Except in breeding colonies, they do not socialize with other anhingas. These birds are very protective of their nests, extending their wings and cracking their beaks to ward off intruders and pecking each other on the chest and neck if required. They spend much of their time fishing or perched on trees when not on the water. They frequently swim out of the water to sunbathe themselves. Anhingas, like turkey vultures, flap their wings to sun themselves, drying up their feathers. They lose heat fast in water because they lack a coating of body feathers to insulate them; therefore, the sun’s heat keeps them warm.

However, cormorants are pretty social. Small and big groups can be encountered at both nesting sites and during the winter. They eat in big flocks and reproduce in colonies. They move in packs. During the day, cormorants search for fish. Cormorants seek an elevated platform with their wings extended after hunting/diving.  This is probably to dry the feathers. However, caged cormorants that do not dive for food also dry their feathers after feeding.

Similarities between Anhinga vs Cormorant

The Anhinga and the Cormorant are both intriguing water birds. They both have lengthy, snake-like necks and may be seen perched along the shore, in rivers, lakes, and ponds, among other places. Fish are the primary prey for both species. They both hunt below the surface of the water to obtain their food.

On the other hand, Cormorants and Anhingas do not have oil glands, which is why their feathers do not repel water. This is advantageous to both species since it allows them to move more freely underwater while hunting.

Unlike other water birds, the Anhinga doesn’t have any oil glands to keep its feathers waterproof, as do most other water birds. When it swims, it becomes soaked, which permits it to move more effectively beneath the surface of the water. In order to fly, it must first extend its wings and allow them to dry in the sun.

Here are some more Anhingas facts:

Here you can check all Anhinga sounds

This fish-eating bird may be found in coastal locations and feeds on small fish and other aquatic organisms. Inland waterways are their preferred habitat, as they do not dwell in the open sea. They also construct their nest above rugged rocks.

Here you can check all Cormorant sounds

Anhingas are large, black waterfowls with a long tail, a snake-like neck and a tiny head. They have red to blue eyes and a long, olive-brown beak, which they use to catch fish.

Cormorants are tiny, long-tailed birds with black top and bottom portions and a shiny blue appearance.

Cormorants and Anhingas, both have long necks, may be found perched on the banks of rivers, lakes, and ponds. On the other hand, both birds do not have oil glands, which is why their feathers do not repel water.