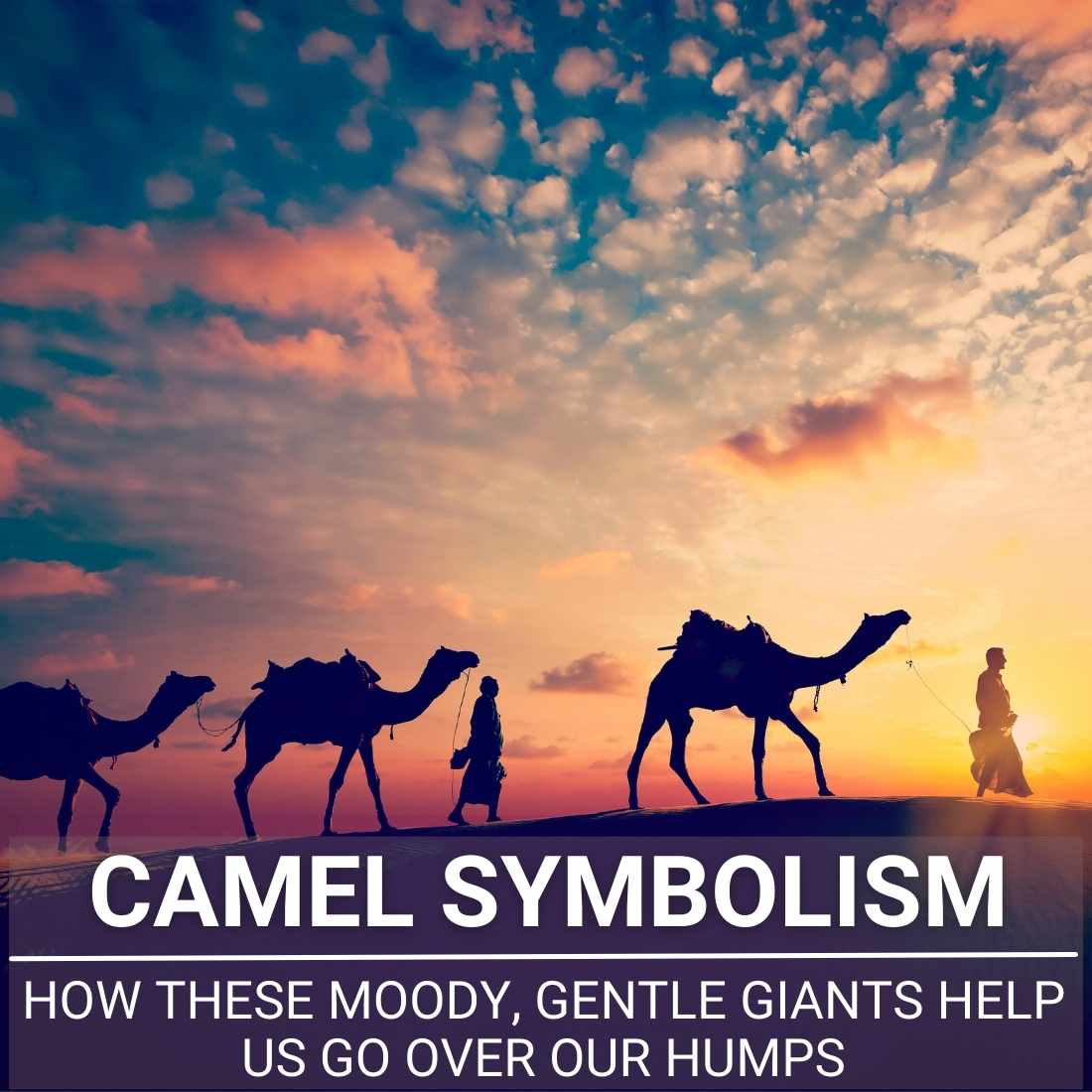 Apart from their distinctive humps, we all know that camels have the amazing ability to survive weeks without drinking. Playing a significant role in Arabic communities, these mostly domesticated desert-dwelling creatures are one of the many power animals that most of us believe are a spirit guide that influences our actions and decisions in life. Often dependable, loyal, and patient, with the notorious reputation to spit and kick, we can better understand what the camel animal spirit represents by carefully listening to and analyzing its many symbolism.

Camel Symbolism is a common theme in cultures throughout the world, and for good reason. Camel spirit animals are symbols of patience and dedication. Camel’s symbolism means that you should be patient and not rush things as they come to you, because if you do it will make everything fall into place naturally.

The barking of a dog does not disturb the man on a camel.

What Does A Camel Symbolize?

Because of their incredible ability to roam the desert for extensive periods without any food or water, it doesn’t come as a surprise that camels are referred to as the “ships of the desert” in many Arabic cultures. Known to be some of the most enduring species on earth, these fascinating spirit animals are a symbol of positivity, persistence, stamina, and strength. While many of us appreciate these wonderful and gentle creatures for their awesome physical traits, these exotic and inspiring animals are valued and admired for the marvelous symbolisms that they bring.

A true definition of genuine positivity, these wonderful animals are easily associated with exploration, travel, and a long journey. While it can at times represent an actual physical adventure, it may also present the image of new discoveries that eventually lead to spiritual relief and divine revelations. Highly regarded as a symbol of courage, patience, endurance, and strength, these alluring creatures with exceptionally long eyelashes remind us about the importance of being mild, tolerant, and lenient as such traits allow us to achieve great things as long as we don’t give up.

Far from being demanding creatures, their bodies are equipped with physical capabilities to withstand even the most extremely poor conditions in which the camel represents modesty, diligence, energy, and survival. All it requires is for us to attune ourselves with the camel to allow this animal spirit to guide us in the most excellent and advantageous way.

Throughout history, various cultures have portrayed love by way of symbols. As the appearance of this spirit animal in your day-to-day life could be an indication that a handful of good things are about to come, it could be a message that you must prepare yourself for an adventure that may at first seem difficult. While camels are in no way close to being the ultimate symbol of adoration, their gentle, loyal, patient, and easygoing nature have made them a suitable representation of love and affection.

Those who have the camel as their animal spirit guide tend to be more determined and patient and are willing to do everything to make their relationships a success. While it can at times reach a point where they might feel all burned out, they would patiently try their best to understand their partners for the relationship to work. And since camels can be persistent and enduring, they would often overlook other opportunities that eventually lead to causing them more harm. Known to be good friends and lovers, camels teach us the importance of putting a lot of effort into our relationships as it enables our connections with other people to withstand challenges and difficulties, as well as the test of time. Since camels don’t easily give up, they are more likely to maintain lasting relationships as they are ready to do everything they can for the person they care about.

A popular representation of toughness, endurance, and sacrifice, camels are more than just for carrying your luggage and traversing sand dunes with tourists. With going on adventures and journeys as their key symbol, these hardy animals’ ability to withstand blistering desert temperatures and carry considerable amounts of cargo across long distances make them the perfect spirit animal to help you go through the most challenging of times. When this spirit guide enters your life, it provides you with the positive energy and the courage to face the difficulties of the journey with great enthusiasm.

Whether it’s a physical journey or a spiritual odyssey you need, the camel will provide you with higher spiritual foundations, as well as the strength and protection that you will need to make it through to the end. As an animal that helps make long expeditions fast and easy through the harshest conditions, these steadfast creatures are gifted to make sure that they see you through your most difficult times.

Referred to as the dromedary camel, this single-humped sand lover’s symbolic meaning is a tad different from its two-humped Bactrian peers. When the dromedary camel enters your life, it will teach you how to use your resources with the utmost care. Not only does it show you the importance of saving what you have for the unexpected rainy days, but it also provides you with the positivity that can help you mend the rough patches that you currently have. By furnishing yourself with calmness and a sense of humor, you can share the cheerful and pleasant energy that will keep the people around you lighthearted and joyful, especially when times get tough.

If the Bactrian camel is the presence you have, it means that you are highly adaptable and are able to do well regardless of the challenges thrown at you. Resilient and versatile, constant changes and movements do not easily dishearten those who have this camel as their animal totem, all while lifting everyone using their powerful and dedicated spirit.

Camel symbolism is found in Buddhism and Hinduism, where the camel symbolizes a willingness to do what it takes even if you don’t want to. Camel spirit animals are symbols of dedication and patience. The camel meaning reminds us that we should work hard for things we truly believe in or care about because life isn’t always easy but good rewards take time so be patient.

In the bible, Camel’s symbolism is used to represent a number of different things. Camels are often seen as symbols of wealth because they were an important part of desert trade routes. They are also mentioned in the bible as being one of the animals that will be present at the end of days. In general, the camel symbolism in the bible represents strength, patience, and dedication.

In ancient times, camels were used for a variety of purposes from riding to beast-of burden. In the Bible, we read about these animals being given by Pharaoh as well as Abraham’s cattle count in Genesis 12:16.

In Islamic culture, the Camel symbolizes charity and giving. The camel was seen as a creature that could go without water for long periods of time so it came to symbolize endurance and sacrifice. Charity is an important part of Islam, and so camel meaning reminds us to always give what we can to help others.

The Camel is a miracle of the almighty God, mentioned in the Quran and recommended by prophet Muhammad. Its milk has been used as a remedy for some diseases such as skin conditions like eczema or psoriasis because it reduces inflammation while boosting hydration to improve symptoms!

It’s no surprise that camels were very important to the Bedouin tribes of southern Arabia. As we saw in Oman, a camel hump became currency and each tribe had its own song for them — called Jabra — which was sung while crossing deserts with this species on routes over long distances between towns/villages. A single journey would take months; these animals could go days without water if needed too but also required sustenance along their travel route such as feedings at regular intervals during daytime hours before stopping by campsites where meals awaited caravan leaders’ approval after they arrived safely home again!

Camel dreams can symbolize many different things depending on the person’s individual experiences and culture. In general, Camel dreams may symbolize:

If you dream of a camel, ask yourself what qualities the camel is representing for you. Camel symbolism in dreams can have a strong positive or negative meaning depending on the person’s circumstances. A camel dream interprets being patient, calm, and confident under pressure. A camel may symbolize your willingness to get through difficult times without losing hope for better days ahead because you are determined to succeed!

Dreaming of camel riding is often interpreted as representing leadership, independence, and determination. It might also be seen as an omen that you should go with what feels right deep down inside rather than following the crowd – even if it seems risky at first glance!

Camel dreams mean having power over yourself while keeping other people close by lest they wander off too far away from home base (in society). Camel spirit animals represent leading others while staying focused on your own goals so don’t get lost in other people’s problems. The camel reminds us that everything is temporary and will come to an end, even the difficult times are meant to teach you something before moving on. Camel meaning in dreams may also be interpreted as being patient when it comes to situations that aren’t going your way yet because things take time but they always work out for good eventually!

Dreaming of Camel can also symbolize being dependable while learning how to control yourself rather than letting others have too much influence over what you do/believe etc..

Don’t let change overwhelm our emotions or fears stop us from chasing after our goals – life isn’t about staying comfortable all the time so push yourself outside of your comfort zone once in a while if you want to grow!

By teaching us how to live from within ourselves, the camel often comes as a reminder for us to take it easy and slow down. With such adaptations like their unique ability to close their nostrils to prevent sand and dust from going up against their noses, as well as having small, hair-covered ears to stop residues from getting in, these prickly plant-eating machines help develop in us the real essence of survival, patience, and endurance, all while keeping our legs and spit to ourselves.