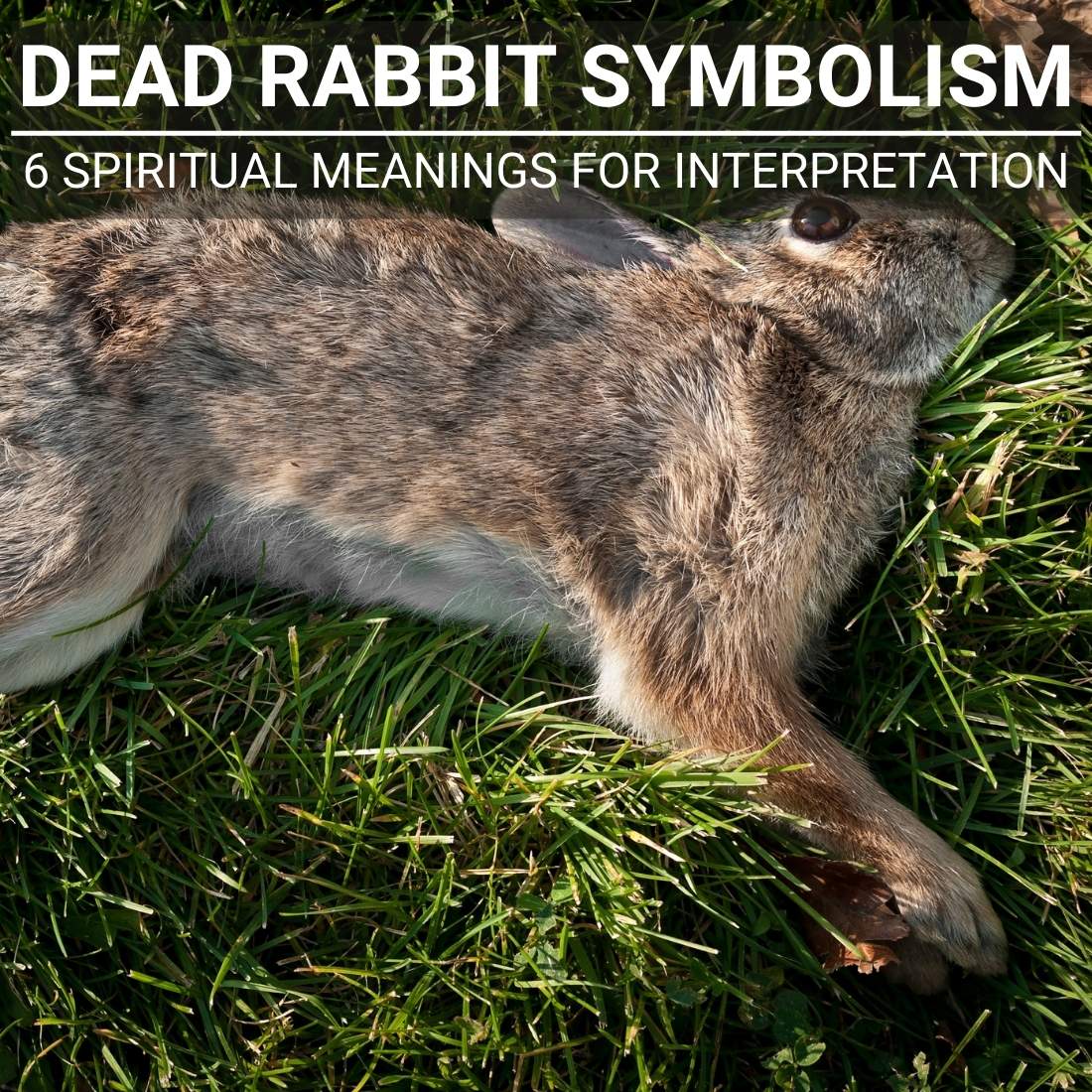 A famous white rabbit once said, “The hurrier I go, the behinder I get.”.

This holds true for many things in life. We rush through life, always thinking that what comes next will be the best.

Seeing a dead rabbit was a message from the spiritual world to stop and be present in the current moment. The rabbit hole has opened, so you better be ready to embark on a spiritual journey.

Take your time to read about the strong symbolism behind this animal and explore the spiritual implications of seeing the rabbit dead.

What does a dead rabbit symbolize?

There is a dead rabbit symbolism that pervades many cultures around the world. The meaning of the dead rabbit varies depending on where you look, but there are some constants. In general, the dead rabbit symbolizes transformation, new beginnings, and change. This makes sense when you consider the life cycle of a rabbit. They are born small and weak, but they grow into large and powerful creatures. They represent resurrection and new life.

It is no coincidence that cultures from the west to the east similarly represent the rabbit. There is some recurring symbolism related to the rabbit.

Due to its natural reproductive potency, the rabbit is the symbol of fertility and strong libido. It takes only a month for the doe to bring dozens of new bunnies into this world.

The dead rabbit symbolism on your way means fertility the same way a live rabbit would. Although the rabbit was dead, it had already brought enough rabbits to this world. Having offspring makes a living being immortal.

The moon, as opposed to the Sun, symbolizes femininity. It is thought to carry feminine traits such as intuition and emotion. Moreover, the lunar cycle is thought to influence the menstrual cycle, the most central part of fertility.

The gentle nature of the rabbit and its ability to reproduce in many cycles throughout the year makes it the perfect animal to be linked to the moon.

An old myth about the Moon Rabbit represents the connection between rabbits and the moon. This myth is found in East Asian cultures and even Native American folklore.

All of these worldwide myths share the same storyline. There once was a hungry beggar. The rabbit, as kind as it was, tried to find food for the beggar. However, it could not find any. The only food the rabbit thought of offering was itself. So, it jumped into the fire, selflessly sacrificing its life. The beggar was so grateful that he decided to bring the rabbit to the Moon.

People saw the shadows on the moon shaped like the rabbit and thought this story was the perfect explanation.

The rabbit in this story symbolizes sacrifice but also immortality.

The bunny symbolizes Easter, the Christian celebration of the resurrection of Christ who defeated death. It occurs at the beginning of spring.

The correlation between rebirth, Easter, and rabbits seems rather straightforward. Rabbits are symbols of fertility, and spring is the most fertile season.

If you want to learn more about how rabbits and eggs came about to be the symbols of Easter, I would recommend the following video

Did you come across the rabbit in an unlikely place?

If you strayed from your usual path, the rabbit might be your reminder to get back on track.

The guardian angels use various sorts of communication to transfer their messages to us, the rabbit might be one of those messages.

Good news! You have stumbled upon the rabbit because it was supposed to help you channel all the negative feelings and fear you have been feeling lately.

Try reliving this experience once again in your mind. Picture yourself walking and then seeing the rabbit. Now, bury all the feelings and memories you have been carrying around as a burden.

The rabbit can never be a representation of something terrible or ominous. It, however, has the power to help you take all the bad stuff into the spiritual realm so you can live more freely in the physical world.

The most potent message in seeing any dead animal is that life is too short.

The rabbit is highly fertile, fast, and above everything else, a gentle creature. However, its fertility does not prevent the rabbit from dying. It only allows it to continue living in another form. This is true for all living beings. Therefore, hop into new adventures. Do not wait for a second reminder.

White is the color of innocence and light. It is the ultimate symbol of good. However, all extremes are just the flip side of the coin. Death is another representation of life.

Christianity sees the white color as a symbol of new beginnings and happiness. However, in the Chinese culture, people wear white while mourning, thus symbolizing the end of life. There are many dualities in this situation. Not everything is black and white in life. You cannot expect clear-cut answers to every question.

Sometimes bad things happen to good people and vice versa. Life is not always fair, but it is always a gift.

Omens are usually self-fulfilling prophecies. This dead rabbit is what you make of it.

To uncover its meaning, you may ask yourself the following question. What was the first thing that came to mind when you saw the dead rabbit? Give yourself a minute.

If your thoughts went something like this: I hope this doesn’t have anything to do with…it is precisely the thing it has everything to do with. This reminder of mortality can only help you realize what is important to you.

Whatever you were afraid of most when you saw it is something you should protect at all cost. Stay hopeful, cautious, and focused. Be reminded of the tale of the hare and the tortoise. Your speed does not matter; your focus is what will get you to your goal. Read more about the hare symbolism.

The Native American cultures see a dead rabbit as a sign of good fortune. They also believe that the rabbit is a guide to the underworld. In some instances, the dead animal might be a message from the dead, telling you to move on with your life.

The Celtic culture believes that rabbits are used by fairies to create mischief. They also see them as symbols of transformation and new beginnings.

In general, dead animals are not considered omens in most cultures. However, they can be interpreted as such depending on the situation.

“People’s dreams are made out of what they do all day. The same way a dog that runs after rabbits will dream of rabbits. It’s what you do that makes your soul, not the other way around.”

If you were to see a dead rabbit in your dreams, it might symbolize some physical or emotional danger.

You should also consider the color of the dead animal. If it was white, then it might represent innocence and purity. On the other hand, if it was black, then it could be a warning sign of something bad about to happen.

The dead rabbit in your dreams can represent also an omen of bad luck. It could be a sign that you are losing something important, such as family or friends; it may also mean the end is near for one specific thing which means there’s nothing left but heartache!

Consider all the circumstances surrounding the dream before coming to any conclusions.

The myths and legends surrounding the rabbit give a prominent place in the animal kingdom. The rabbit gives hope to people that life can flourish on our planet. Thus, you may see the rabbit as a life cycle symbol.

Its death may be the wake-up call you needed. Do not waste any more minutes of this precious but short life. Take the leap of faith and enjoy what lies ahead of you.

You also might want to check out our post about bunny symbolism – a guide to the meaning of bunnies.

1 thought on “Death and the Rabbit: A Look at Its Sacred Symbolism from Six Different Angles”