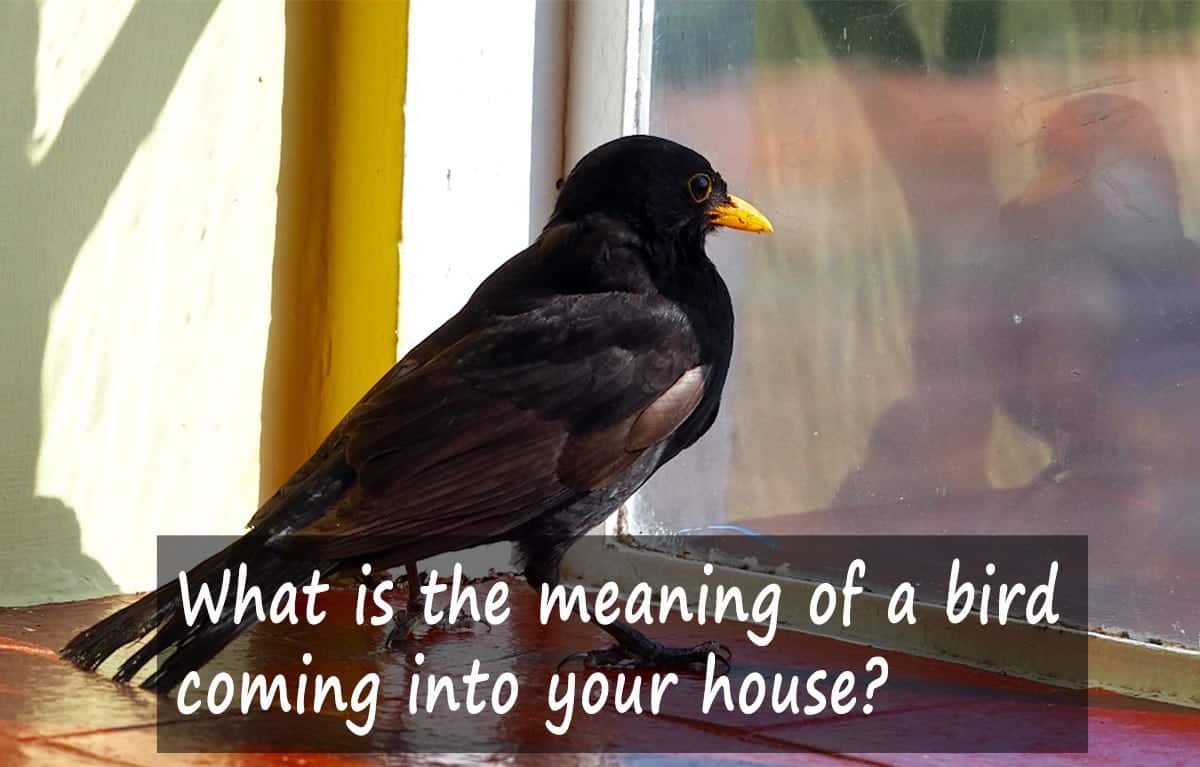 What is the meaning of a bird coming into your house?

There are a huge number of superstitions and meanings associated with birds. This only comes more to the fore when it involves your own home as well, especially the wild bird in a house meaning. In general, the associated meanings of a bird flying into your house are not good. A bird entering your dwelling is said to be a sign of bad fortune. It is thought to herald some impending doom or bad news that you will soon receive. In fact, a bird entering your house could precede the worst news of all, such as the death of a loved one.

There are a few variations of this old superstition. For example, certain types of birds in your home are considered more ominous than others. For example, crows, ravens and blackbirds are thought to be particular messengers of death. The general advice is to not let birds enter your home at all. If you are caring for a sick or injured bird, then it is better to do so outside the house. Similarly, all unnecessary bird-related paraphernalia, such as bird-decorated wallpaper, should be avoided, just to be on the safe side.

Many people believed that because birds could fly so high, they regularly flew in and out of heaven and were therefore closely connected to god. This belief formed the basis of literally hundreds of bird-related superstitions, some of which are still followed even today.

A wild bird entering a house was seen as a death omen to many people:

“If a bird flies into your house, a death will follow within three days”

In Ireland it was invariably associated with death or extreme bad luck, particularly for the women of the house and there is evidence that this association was so well accepted that, under the ancient Brehon law, an unmarried woman who became pregnant and could prove that she had been frightened by a bird flying into her house (particularly magpies, crows or ravens, for some reason cinematically always associated with the devil or evil spirits and hence the traditions of saluting magpies and the children’s nursery rhyme “one for sorrow, two for joy…wtc”) then she would have been cleared of any accusations of wrongdoing, and her virginity would no longer be in question, mandated by the judges…

Regardless of the symbolism or superstitions involved, the destructive capability of birds when confined in small spaces or rooms or the ability of birds to steal things (particularly shiny or sparkly things like jewellery), has been well established, and this may be the foundation for many of these beliefs.

Sometimes also, small birds hopping around, foraging hop into an area to see if there’s any food there…

Is it good luck for a bird to fly into your house?

For centuries birds have been associated with news and messengers. This dates back to when carrier pigeons were used to send messages across the country. The bird in house meaning and the message they are thought to carry is an evil one. Of course, this links in with many other superstitions which surround birds. For example, birds such as crows and ravens are intricately linked with death, and probably worth avoiding in general.

On very rare occasions, a bird entering your home could be considered a sign of good luck. If a white bird, such as a seagull or a dove enters your home, then this can have positive connotations. These birds might be bringing a message of love, good news or impending good fortune. So, if you are going to let a bird fly into your house, make sure it’s a white one.

What to do if a bird flies into your house?

Because of the related superstitions and stories associated with birds flying into houses, many people may panic if such an event occurs. This is not the right thing to do.

First of all, you should get rid of the bird, without harming the creature. Hurting the bird is only likely to bring further ill will and bad luck onto your home. Firstly, open all the doors and windows. You need to create an avenue for it to escape. Next, wearing some eye protection if possible, you should gently guide it to the exit. Some gentle coaxing and cajoling should encourage it to leave, but you should not frighten or unnerve the bird.

Once the immediate problem is out of the way, you can turn to the problem of cleansing your home from the bad luck. It is important not to dwell too much on the bad signs. You can try doing some simple things to bring on a bit of good luck to counter the bad energy. For example, you might consider crossing your fingers, wishing on a penny, or hanging a horse-shoe outside your front door.

One of the most effective ways of countering this kind of bad luck is to go out your way to show kindness to birds. For example, you can hang some bird feed in your back garden or set up a bird house. This should help restore some sense of balance and equilibrate the ill omens.

What if a bird is tapping at your window?

Unfortunately, the meanings of this are equally ominous. This sound is truly chilling to a huge number of people worldwide, because of what it foretells. A bird pecking on your window is thought to be a sign of death for someone in the house. This could also be a sign of death for someone not in the immediate family, but in the extended family. In Gaelic culture, this may be related to the tale of the banshee, a haunting creature who is said to tap on the windows of homes where death is about to strike.

For obvious reasons, this is not very well received. There may be a more innocent explanation. Often birds are simply surprised by the sight of their own reflection and pecking at the window is how they try and show dominance to this new bird (their reflection). However, this will do little to calm the nerves of more superstitious people.

What if a bird flies into your window?

A bird flying into your window can also be seen as a very symbolic event, filled with potential meanings. Many people consider this to have the same meaning as a bird tapping on your window (i.e. an impending death), but this is overly simplistic. The truth is that a bird hitting your window can foretell a major change in your life, forcing you to change direction. Just as the bird is stopped in its tracks, and need to reorient itself, so too will some member of the household. Of course, a major life even could be a death in the family, but it could also be a career change, a new baby, or simply a newfound purpose in life.

A bird flying into your house does not have to have a dark, sinister meaning. It could be the beginning of a glorious new phase in your life. It is especially auspicious if the bird manages to get up after the accident, reassert itself, and fly away safely.

Actually rather funny: on her way into her home, this girl found a bird lying on her driveway. She immediately thought it was injured and took it inside her home. When she stepped away for a second and came back the bird was flying around the house. Note to self: Don’t assume birds are injured because they aren’t flying.