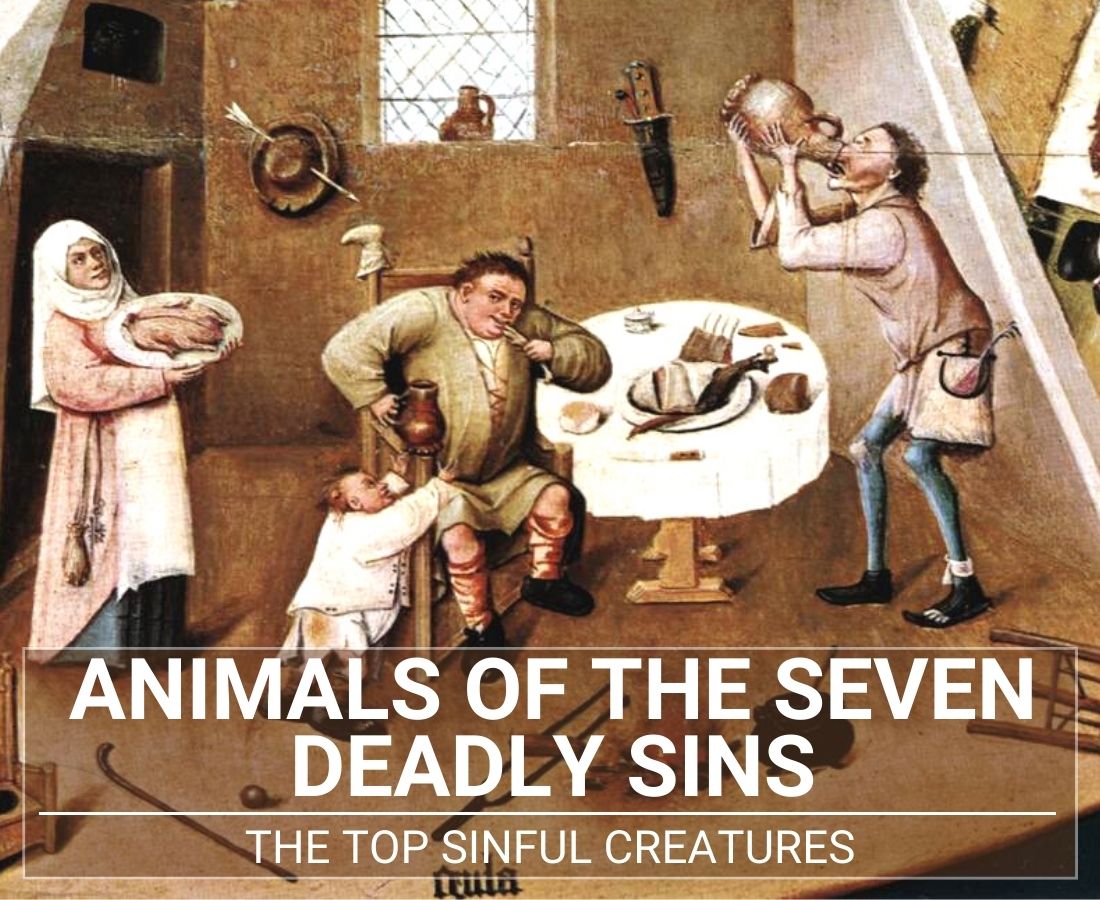 From teachings, writings, and movies, we have long been led to understand that humans are naturally unmotivated, corrupt, and self-gratifying. For ages, our ancestors toiled to find ways to practically rationalize these spiritual shortcomings.

Regarded as those transgressions that hamper our spiritual growth, the seven deadly sins – pride, envy, lust, sloth, wrath, gluttony, and greed – were named to further describe our faults and misdeeds. As these immoral acts are thought to result in the death of our souls, we look to these animals to help deliver us from our spiritual downfall.

Widely known for its vibrant and jaw-dropping plumage, the peacock is undoubtedly one of the most beautiful birds on the planet. Featuring long gorgeous feathers of intricate design, the male uses the beauty and charm of its tuft to land a date with a potential mate. This trait led many to see the peacock as a negative symbol of pride.

The peacock’s stunning tail and colors were seen to represent how some of us would cover ourselves with excessive clothes and jewels to show off to others. However, little does the peacock know that the part of it that is not coated by its magnificent feathers remains the same, reminding us that vanity is only skin-deep and that what is important is the beauty within our hearts. Here you can read more about the peacock’s symbolic meaning.

Gifted with eyes that see better in the dark, the fox’s habit of going on a killing frenzy in hen houses signifies how they tend to want to acquire more than they require. Several cultures consider foxes are animals that symbolize our needless desire for material wealth and attention. These relatively solitary creatures have been marked in several cultures to be among the animals of the seven deadly sins.

A popular image of intelligence and deceit, the fox is notorious for using its cunning nature to steal food from farmers and larger predators. While some see it as inspiration for ambition, many perceive this to be greed or an overwhelming desire for more.

Continue reading other symbolic meanings of the fox.

Since they own the distinction of being one of the first animals tamed by humans, the goat traditionally seen as an animal of resilience, modesty, and abundance (as seen in creatures being half man half goat: the faun or the satyr) . However, its association with revelry and sensuality gave birth to the belief that these aggressively territorial chewers are an animal of strong sexual passion and lust.

Observed to have the capacity to learn how to stand and walk minutes after birth, the goat represents our willingness to go after the things that lead us to temptations and sensual thirst. A highly divisive figure in the Bible, it is said to symbolize our irrational and exorbitant need for physical pleasure.

Find more information about the goat and its symbolic meanings.

Whether you are looking at its golden mane or the magnificent way it stands, the presence of a lion is indeed a royal sight. Known for a roar that you can hear for miles, the ferociousness and brutality of the “King of the Jungle” have made it a runaway symbol of anger and wrath.

Revered for their devotion to the care and protection of their pride, these fearsome beasts would aggressively and blindly charge toward those that threaten his family. This associated the lion with how we become blinded with rage when we have been taken over by our inner wrath.

Contrary to what many of us believe, the pig is admired for both its intelligence and its fondness for being clean. A favored staple in farms and barns, their insatiable appetite has long made them poster kids of gluttony and voracity. They symbolize our tendency to consume more than what our bodies need and require.

While a handful of traditions see the pig as an emblem of abundance, prosperity, and wealth, their love for mud and seemingly ravenous nature has caused many to view them as unclean, wasteful, and excessive. Acknowledged as a time-and-again hungry creature, they remind us of how everything is much better when shared.

The snake is admired for its ability to inspire change, yet ridiculed for its tendency to make a snack out of its own tail. Its strong desire to obtain the gifts that God gave men allows it to slither into our list of animals of the seven deadly sins. While there are a handful of animals that contend to symbolize this wrongdoing, these docile animals would most probably deceive them into giving up the recognition.

Frequently described as our impulse to long for the traits, status, and life situations of others, many believe that it was the snake’s envy that led it to trick Eve into eating the forbidden fruit. Originally referred to as the “sin of sadness,” now you know why people tell you to never allow the life of others to dictate your own happiness.

Check out our post, in case you found a snake in your house.

While many of us admire the bear for its particularly high intelligence, their habit of being inactive for months has made them a representation of sloth and laziness. From the ferocious grizzly to the adorable panda, this relatively gentle animal’s inactivity reminds us of the dangers of refusing to work physically and to grow spiritually.

Bears are known for favoring honey, a sweet and delightful treat that requires you to go through bees to acquire it, implying the temptation of sin. This led several traditions to view the image of a bear eating honey as an indication of those who take the easy and more pleasurable path instead of making an effort to stay on the righteous trail.

1 thought on “Animals Of The Seven Deadly Sins: The Top Sinful Creatures”