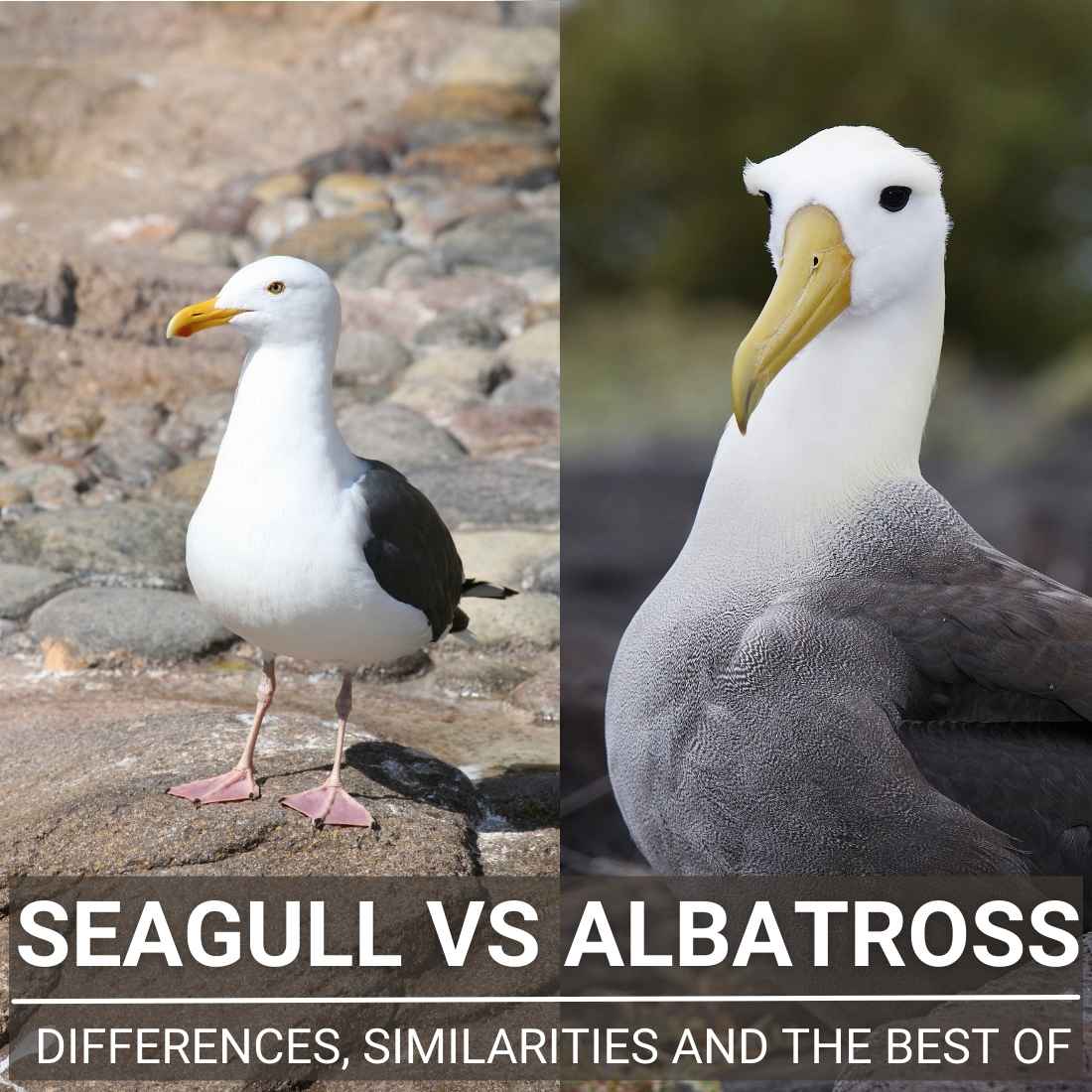 Seagulls and albatrosses are both prominent avian members of the seabird family that live in the vicinity of the ocean. Despite the fact that seagulls and albatrosses share a similar environment, there are significant distinctions between the two species. It is reasonable to assume that the common names of these birds accurately describe their habitats, yet seagulls only inhabit a limited part of the sea. Therefore, it would be important to be aware of the difference and similarities between these two interesting birds.

Differences between Seagull and Albatross

The gulls are casually referred to as “seagulls” and are members of the Family: Laridae of the Order: Charadriiformes. On the other hand, Albatrosses are huge to extremely large birds that are members of the Diomedeidae family of birds. It is estimated that there are more than 55 existing seagull species, whereas there are around 20 living Albatross species, all of which dwell in the Southern and North Pacific Oceans but are missing from the North Arctic.

Although seagulls are generally medium to large in size, they also have small species weighing 200 grams. The maximum Seagull species can weigh around 1.75 kilograms. On the other hand, Albatrosses are way larger than Seagulls and have something unique about them: they have the largest wingspans of any bird, and they are the largest of all flying birds.

Seagulls are usually gray to white in color, with black markings on their head and wings depending on the species, while albatrosses have somewhat pinkish beaks, a little yellowish neck, and a black and white body. Seagulls are mostly omnivores. Seagulls are voracious hunters of fish and crabs, and they may snag enormous food by opening their powerful beaks wide. On the other hand, Albatrosses are carnivores and eat mostly squid or fish.

Similarities between Seagull and Albatross

Seagull and Albatross can swim and dive well. They are excellent divers. Both these species have webbed feet that are the best adaptations for swimming and diving.

Another similarity is that both Seagulls and Albatross can fly up to larger distances. Both these species have white-colored bodies with black marks, and both of these are wild birds, so they can not be kept as pets. And finally, both these birds have longer lives that are more than 30 years.

Interesting facts about the Seagull

Seagulls are often found in coastal or inland environments, and they prefer to build their nests on the ground. Seagulls’ Nests are big and closely packed, resulting in loud colonies of seagulls. Seagulls have complicated communication systems. They are blessed with extended lives that can last as long as forty years in some instances.

Seagulls are monogamous birds that mate once a year during their mating season, which lasts between three and five months. Nest construction is also a part of the bonding process between a pair of birds. Others choose to construct their nests on elevated sites such as cliffs or trees, while others choose to build their nests on the ground. In most cases, the female lays three eggs, and both males and females are responsible for incubating the eggs, which takes 26 days. Males and females care for the newborn chicks for one to two weeks, during which time the female solely feeds them.

Here you can check all Seagull sounds

Interesting facts about the Albatross

The upper mandible of the Albatross is equipped with a huge hook at the end of its lengthy bill with sharp edges. Their bill is characterized by many horny plates and two tubes that run over the top of the bill, which provide them with an exceptionally strong sense of smell. It has been shown that Albatross has an outstanding adaption for removing salt from their diet. They do this by excreting salt through the salt glands in their nostrils. They do not have a rear toe, but they do have three toes that point forward instead. The undersides of the albatross wings are black and white, while the upper sides are a deeper shade of brown. They like to nest on distant oceanic islands and survive for up to 50 years in the wild. However, there have been reports of albatrosses that are more than 80 years old.

It is common for Albatross to nest in groups on distant oceanic islands, with numerous species sharing a single nesting site. Couple connections between males and females are formed over a period of several years via the usage of ritual dancing, and the pair will remain together for the rest of their lives. A single enormous white egg is placed on the ground or in a heaped-up nest, and both parents incubate it at the same time in succession. The incubation phase usually lasts between 70 and 80 days. After hatching, the chick is cared for and guarded for three weeks until it is strong enough to care for itself and fight for its own survival.

Here you can check all Albatross sounds

We can say that both Seagull and Albatross are beautiful sea birds and can not be kept as pets. Seagulls have larger beaks and can fit a huge amount of food in their beaks, while Albatross beaks are modified weapons to kill their prey. Additionally, these birds can fly long distances and have a huge lifespan.