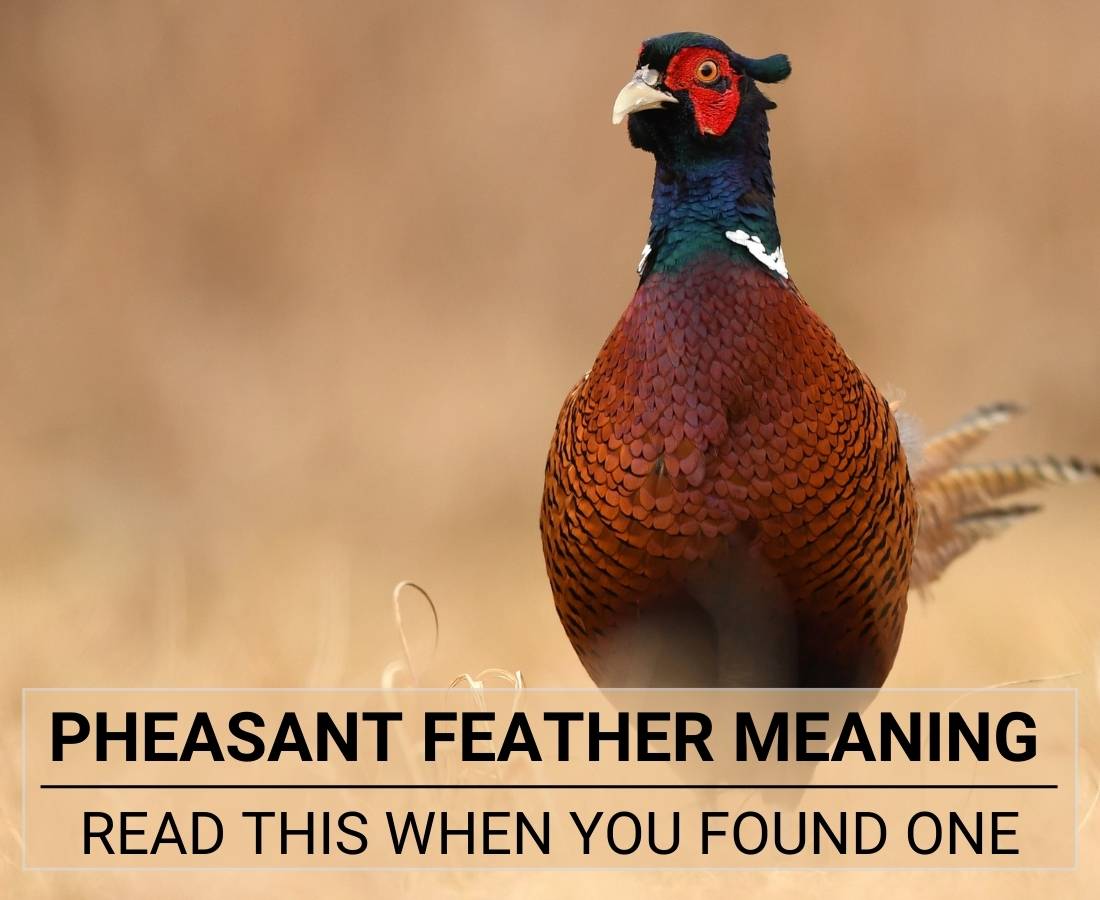 Pheasants are known for bursting into the air with their fast flight velocity and fight-or-flight response. Unlike most birds, pheasants live primarily on the ground, making finding their feathers a common occurrence.

If you’re like many people, finding a pheasant feather is an exciting event. Pheasants are beautiful creatures, and their feathers are stunning. But what does it mean when you find one? What is the symbolism and meaning of pheasant feathers?

In this blog post, we will explore the spiritual significance of pheasant feathers and discuss some of the mythology and history associated with these birds. We hope that this information will help you to appreciate the power and meaning of pheasant feathers!

Pheasant feathers are usually long and slender, with a curved shape. The colors of pheasant feathers can vary, but they are often brightly colored. Pheasants are known for their vibrant plumage, which is one of the things that makes these birds so beautiful.

Pheasants have been revered throughout history for their beauty and their symbolism. In many cultures, pheasants are associated with good fortune and prosperity. Pheasants are also often seen as symbols of courage and strength. In some mythologies, pheasants are even said to have magical powers!

What does finding a pheasant feather symbolize?

There are many meanings within the pheasant feather, such as forward movement, caution, and being present.

Pheasants usually fly at a speed of 38 to 48 mph. When they are in danger of predators, they may fly up to 60mph.

The pheasant feather meaning symbolizes swiftness, change, and transitions. These feathers symbolize moving forward without being weighed down by the past.

Hunting and prey are the main causes of death for pheasants. These birds must be on high alert, move quickly, and have a bit of luck to survive in the wild.

The pheasant feather meaning symbolizes the need to be cautious and aware of your surroundings. They are also a reminder of the need for safety and protection.

The lifespan of pheasants is much shorter than many other animals. A pheasant may only live between 1 – 3 years in the wild, but they can live up to 18 years if kept in captivity.

Because of their short lives, a pheasant feather reminds us of the importance of being present. These feathers represent mortality, endings, and embracing what you have right now.

The pheasant feather in different cultures

Pheasants are a common bird found in many parts of Asia, Eastern Europe, and North America. Because of their familiarity, the pheasant feather meaning has had importance throughout many different cultures.

Chinese people associate these birds with good luck, beauty, and nobility. Between 960 – 1279, you could find women wearing beautiful dresses covered in the imagery of pheasants, emphasizing their stunning feathers. These birds were strongly associated with the Song Dynasty, specifically the women within the family.

Between 1391 and 1527, the Chinese pheasant symbolized the second civil servant’s rank badge. The Ming Dynasty admired and cherished the bird, often associated with beauty, status, and high society.

Within the United States, pheasants have become one of the most favorite birds to hunt. Native to Asia, these birds were brought over to the US in 1773. These birds symbolize hunting, community, and spending time in nature.

Pheasant feathers can be found around the homes of many people who hunt these birds or appreciate a more rustic/western aesthetic. Because of their beauty, their feathers symbolize success, ability, and skill–for those who hunt these magnificent birds.

In Buddhism, the pheasant appears in the popular story, Tittiriyaṃ brahmacariyaṃ (the religious life of the pheasant) by Nagarjuna. The pages of these writings tell the story of a group of animals, and the overall message reminds the reader to respect their elders.

In the story, the Pheasant is believed to be the Buddha, who debates with the other animals about who is the oldest. Their feathers are considered sacred by those who have heard and cherished this story.

They are unaware of their true ages, and all animals believe they are the oldest of the group. So, they decide to honor each other, with one of the animals carrying the other while the third animal sits resting on their shoulder.

A spirit animal is a guide that can help you throughout different chapters of your life.

A pheasant’s feathers come in an array of colors, making each feather unique in design and appearance. If the pheasant is your spirit animal, you may be someone who enjoys expressing their creativity through their external appearance.

You have a mountain of creativity within yourself, sometimes almost too much, and you’re not always sure how to express it. Others may perceive you as ‘out there or much different than the average person, and your uniqueness is where your strength lies.

For more information on the variations of these stunning feathers, check out this video!

Further reading about the pheasant symbolism

Pheasant feathers are a beautiful symbol found throughout many areas of the world. The next time you find one of these feathers, spend time appreciating the beauty and try to identify which message from the information above resonates for you at that time.