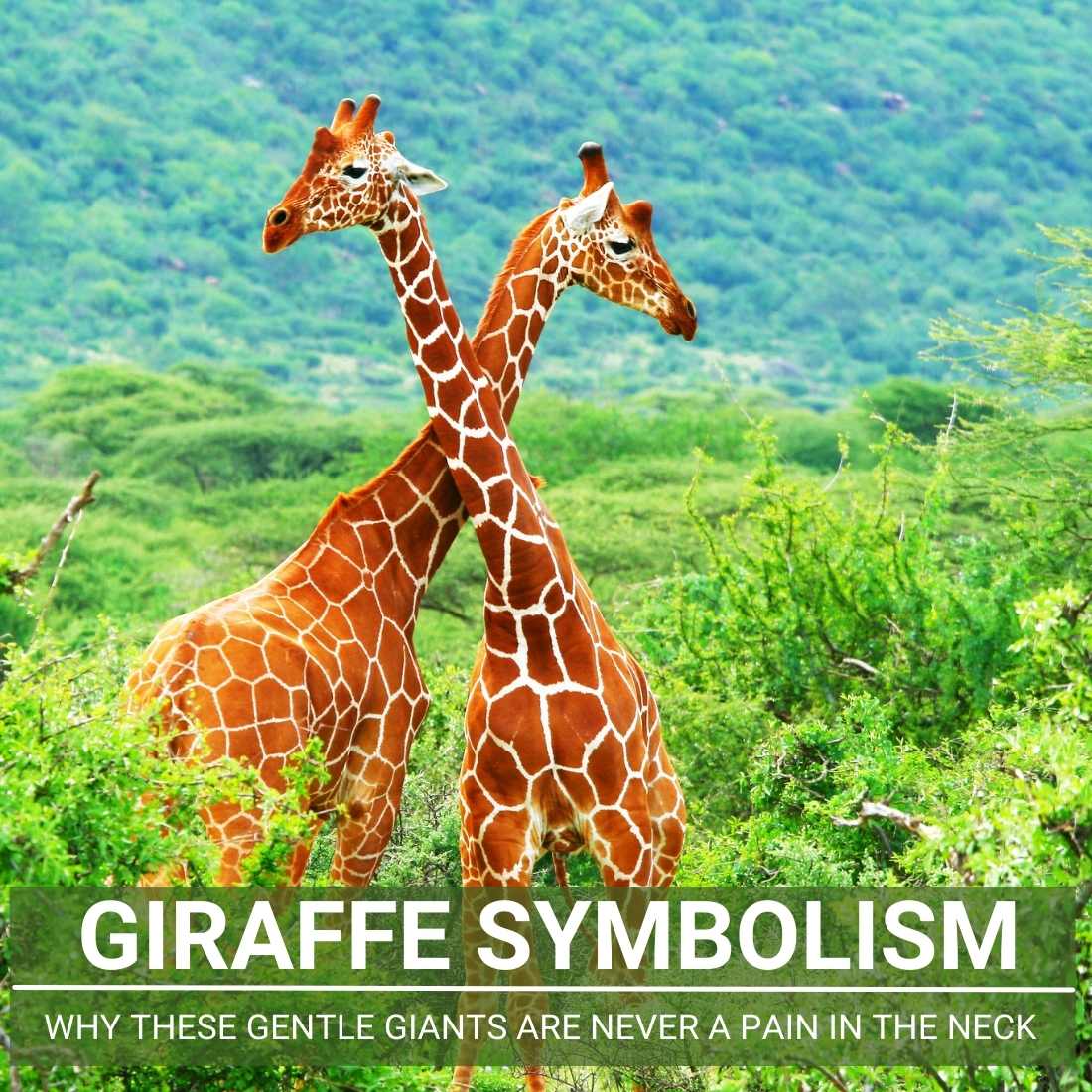 With their unique spots, exceptionally long necks, and refined movements, giraffes are one of the most charming species that you can find in the jungle. Whether you meet them in the zoo, the Serengeti, or a safari, an encounter with these remarkably tall yet extremely shy animals is always a treat for they are known to be gracious, good-natured, friendly, and calm. Typically quiet, serene, and seen peacefully munching on fronds, these towering animals are considered divine messengers that bring forth favorable omens and good fortune.

Acknowledged by many as some of the tallest animals in the world, let’s munch on the captivating symbolism of Africa’s gentle giant.

“The giraffe can behave like the gazelle, but its neck will always tell a story!”

What does a giraffe symbolize?

An incredible animal with an equally amazing symbolic meaning, the giraffe serves essential lessons that can help us explore our uniqueness as we aim to lead a peaceful and harmonious life. Popular for its extremely long neck that can stretch more than 7 feet in length, it symbolizes our need to elevate our vision for us to have a clearer view of our goals. Their presence reminds us to elongate our efforts further to gain an advantage, whether it’s for better family ties or your professional ideals. Galloping gently into our lives in times when a higher perspective on things is required, the mild and delicate nature of the giraffe helps us manage our challenges and difficulties with grace and patience.

Standing an astonishing 14-19 feet tall, these colossal creatures stand as high as the treetops that they just can’t resist snacking on. With a vision that can see past the leaves and into the horizon, giraffes provide us with the gift of intuition, allowing us to use our abilities to shift and influence future events to make them more encouraging and favorable. Demonstrating poise and elegance in every stride, the giraffe appears to us to serve as our reminder that we are all wonderful beings regardless of our particular features and that each of us possesses the awesome capability to rise above our many challenges with great balance and grace.

Boasting eyelashes that just won’t quit, the giraffe’s affinity to eat from prickly trees makes them highly useful and also make these lengthy creatures a known symbol of protection. As their lashes keep debris at bay, several cultures translate this as an affirmation that our visions will be guided with wisdom and that we will be given the ability to pick the right path towards a much more favorable conclusion. While it may not seem too obvious, giraffes are equipped with hairy horns called ossicones that are unique to them. Used to attract females for mating, this highly sensitive feature exemplifies our gift of perception, insight, and a heightened sense of awareness. Not only does it give us the ability to understand the various situations in life more clearly, but it also allows us to better show empathy towards others as we sense what they feel without them having to say anything.

Towering over the rest of its peers in the animal kingdom, these majestic spirit animals provide us with symbolisms that largely pertain to knowledge and foresight. Undoubtedly eye-catching for its long neck, the giraffe prompts us to reach high and long as we meet all the challenges that life gives us. Moving with quiet finesse, poise, and elegance, its hefty presence reminds us that traversing in life with refinement and gentleness allows us to see things in a more positive light. While it might not mean much, such certainty and warmth open us to a better understanding of the feelings of the people who are most dear to us.

Unique not only for their prominent necks but also for spots that are never alike, giraffes are no doubt one of God’s greatest creations. Highly-revered across cultures as messengers of the divine, these awesome creatures’ colossal figure allows them to spend their days closer to the heavens compared to most animals. Bearing the message of balance, perception, self-control, and tolerance, this gentle spirit guide reminds us about the importance of being patient and kind as these traits are essential in helping us achieve the success that we desire.

With a neck that goes above most trees, a tongue that can stretch up to 20 inches, and spots that are as one-of-a-kind as our fingerprints, having the giraffe as your totem animal means that you are comfortable with standing out from the crowd. Silently reaching for the juiciest leaves on a tree, shows that much like the rest of us, you aim to gain the best things in life and that you understand the importance of treating yourself every once in a while to enrich your soul. Enchanting, serene, and brimming with quiet confidence, you prefer an uncomplicated life that is full of simple pleasures. Shy, non-territorial but thrives in the company of a few chosen members of your species, you avoid conflict as much as you can but when left with no choice you are more than willing to utilize your strengths to defend those you deem as precious.

Known for their enormous hearts that weigh about 25 lbs. and grow up to two feet long, people with the giraffe totem would often put the needs of others before their own. While sticking their neck out for others would sometimes bring them trouble, it doesn’t stop these kindhearted, pleasant, and mellow individuals from doing what they can to try and lift other people’s spirits and give them a more peaceful mind. Although their massive structure and bashful nature would often leave them in solitary and longing for genuine connections, the giraffe totem animal encourages you to stretch towards your goals and to never let up until you’ve reached heights that you thought you never can.

The Giraffe symbolism in other cultures

The giraffe symbolism is found in many cultures around the world, and each one interprets its spiritual meaning in a unique way. Here are some of the most common interpretations.

The Giraffe symbolism in African cultures

In Africa, the giraffe is seen as a symbol of strength and power. It is considered the king of the animals and is often associated with royalty and nobility. In some parts of Africa, it is believed that touching a giraffe can impart its strength to the person who touches it.

One of the most interesting and unique beliefs about giraffes is that they are messengers from God. African shamans believe these animals remind mankind to open up their hearts, see what’s truly important in life, and restore the balance between humans and the natural world.

In Asia, the giraffe is seen as a symbol of good luck and prosperity. It is thought to bring these blessings to whoever sees it, and some people even believe that touching its fur will bring wealth and happiness into their lives.

In India, the giraffe is seen as a symbol of grace and elegance. It is said to represent beauty and purity, and is thought to bring good luck to those who see it.

In China, the giraffe is seen as a symbol of long life. It is believed to have the power to grant eternal youth and vitality to those who gaze upon it.

In Europe, the giraffe has been associated with many different meanings over the years. In some cases, it has been seen as a symbol of wisdom, while in other cases it has been viewed as a representation of grace and elegance. Some people also believe that the giraffe can help connect us with the spiritual realm, making it a popular choice for those who practice shamanism or other forms of spirituality.

The Giraffe in Christian symbolism

In Christianity, the giraffe is seen as a symbol of patience. It is often used to remind us that God’s timing is always perfect and that we should never lose faith in Him no matter how long the wait may be.

Giraffes were also important animals on Noah’s Ark, and this is apparent in the Bible when it says “Noah insisted that giraffe find a mate to join him. So he journeyed to all four corners of the earth in search of her.

Native Americans view the giraffe as a symbol of communication. They believe that it can help us to connect with our spiritual guides and allies, and can teach us how to better communicate with those around us.

Giraffes are prized for their milk and meat, but it is more than just a source of food. The animal’s tall stature has been adopted as an identity by many Native American tribes who see themselves in these creatures that stand proud with long necks reaching up to browsing trees at heights unrivaled by any other land mammal.

The giraffe becomes associated with manliness because its energy flows through the spine which makes one feel strong-willed (check also chi vs chakras) – like those characteristics needed from time to Giraffes standing guard over their young while lions wait behind bushes watching suspiciously.

The meaning of the giraffe in dreams

If you dream about a giraffe, it is often thought to represent grace, elegance, and beauty. It may also be a sign that you are in need of spiritual guidance or that you need to open up your heart and see the world in a new way.

Giraffes are often seen as a sign that you’re looking for something different, and when they appear in your dream they can symbolize one of two things. Some people think Giraffe dreams mean they want to stand out from others by being unique with their own set-of-customs; however if this is what’s going on then the situation might have been caused due to some sort of prideful attitude towards oneself which usually leads them to have an overuse sense regarding success promotion etcetera even though sometimes these desires may seem impossible at times.

In dreams, the animal symbolizes also an arrogant, snobbish person who is too proud to have any contact with the viewer. If this applies to your gender then it’s a warning from future disappointment by communicating through someone like that.

Giraffes represent also the absurdities and whimsical nature of life. In dreams, they can symbolize both good fortunes when it comes time to make decisions or bad judgment if you don’t think things through thoroughly before making your move–but then again giraffe could just as easily mean nothing at all! It depends on who is dreaming them up; each person has their own story behind these zoo animals that show up unexpectedly in different cultures around the world.

Another interpretation goes like this: the giraffe is a gentle animal, but with strength and power. The totem of this creature means that you have great spiritual abilities which can help others in need if needed! To Arab cultures, it symbolizes women who are graceful yet powerful – so dreaming about them may mean your soon-to-arrive lover will be possessive or controlling towards both themselves as well as others around her too much depending on what type she dreamed up (maybe even some form of paranormal activity).

Having a clear vision of what lies ahead, the giraffe tells us to never be too complacent about the future. When this spirit guide strides into our presence, they could be bearing a message that reminds us why being patient, gentle, and calm is always better than being constantly on edge. While these fascinating spirit animals can be extraordinarily aloof and reserved, they come into our lives to support and inspire us to be confident and stand just a little taller.