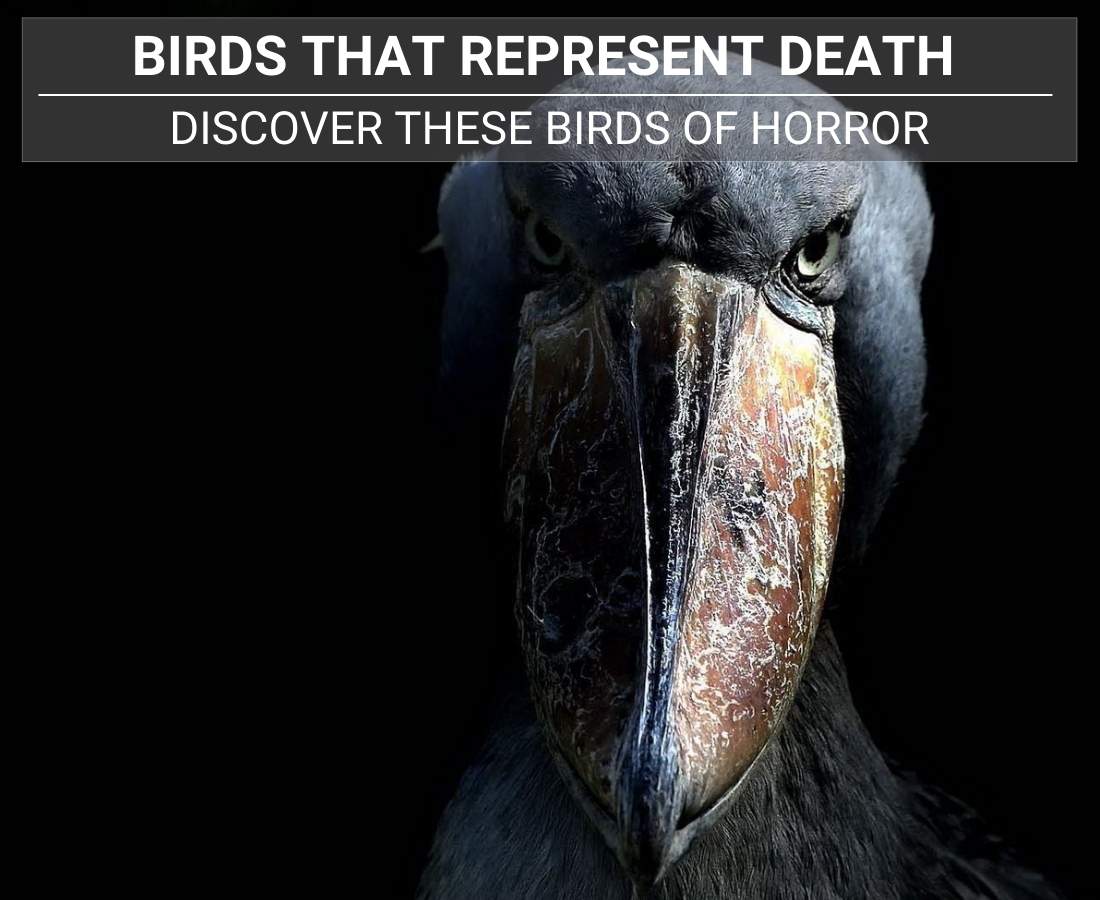 Death and birds have been intertwined throughout history. Many birds, such as the crow, swan, and cardinal, are prime examples of people associating their appearance with experiences like receiving a message from a passed loved one, an omen for approaching death, and the death of a relationship.

“Death may be the greatest of all human blessings”

Here are the top 10 birds that represent death

The crow is one of the most popular bird icons associated with death. Seeing a crow may symbolize a wrongful death, the imminent ending of a life, or even an end of a situation in your life–likely to end on bad terms. A group of crows is called a ‘murder.’

Owls are a unique bird shrouded in mystery. One of the main reasons the owl is associated with death is because it can turn its head all the way around as if its neck is no longer attached to its body. Seeing an owl may symbolize the need to change your perspective in order to find clarity.

Swans are beautiful, graceful birds known for their elongated necks and soft demeanor. These birds are also known for mating for life, making them a symbol of love and peace.

But, they can also symbolize the end of a relationship, depending on the situation. Black swans are usually the type associated with death, but this death is symbolic rather than literal.

“When a BIRD is alive, it eats ants…when the bird is dead, ants eat the bird! Time and circumstances can change at any time…Lets not devalue or hurt anyone in Life…We may be powerful today…But remember, TIME is more powerful, one tree makes a million match sticks.. But when time comes….only one match stick is needed to burn a million trees…lets be good and do good earthlings.”

Ravens are often disregarded because of their appearance, similar to the common crow. Ravens are much larger than crows, and their presence is more potent when you come face to face with this bird in the wild.

These birds have been considered pure evil in disguise in European cultures, making them the embodiment of death. Seeing a Raven may signify a period of darkness within your life.

Also caused by many mentions in literature (for instance: The Raven by Edgar Allan Poe), the raven is a classic example of birds that represent death.

Cardinals are one of the most beautiful birds on earth, with their firecracker red wings and pointed heads. Depending on where you live, seeing a cardinal can be rare, and its beauty can feel like a gift.

Cardinals are sometimes believed to be a sign of loved ones who have passed. Seeing a cardinal in the wild may symbolize someone special, checking up on you and letting you know they are at peace.

Blackbirds, of course, have deep, midnight-colored wings and small, sturdy bodies. The color black has long been associated with evil and death, especially in ancient folklore worldwide.

Because of this, blackbirds have been associated with death, evil, and even witchcraft. Seeing a blackbird may be significant in your life, reminding you of your mortality and urging you to embrace your life while you still can.

The vulture is an ominous bird with a grotesque appearance and mysterious demeanor (and another great example of birds that represent death). The stomach acid within these birds is stronger and more potent than most other animals or birds.

Vultures feast on the carcasses of dead animals and are often found near roads circling over road-kill. Seeing a vulture in your life may signify that something in your life is dying metaphorically.

The dodo bird is an infamous bird that went extinct in the 1600s. They are associated with death due to their extinction, caused by rapid evolution, issues within the environment, and, most importantly, humans overhunting them. The dodo bird is a sign of death that reminds you to only take what you need from others and the need for self-preservation.

The Shoebill is a unique bird that ranges from 3.5 – 4.5 ft. Their gray feathers and beady eyes give them a menacing look.

Their appearance may be shocking to someone unfamiliar with their existence, as they are a walking depiction of death. Seeing a shoebill in person reminds you not to judge a book by its cover, even if something appears scary, as these birds are docile and exhibit no harmful behavior towards humans.

All the birds on the list above may be associated with death, but this doesn’t mean they are inherently evil. Seeing them in the wild may symbolize endings, transitions, and even messages from loved ones beyond the veil.

1 thought on “From the Raven to the Phoenix: Exploring the Birds That Symbolize Death in Mythology and Culture”