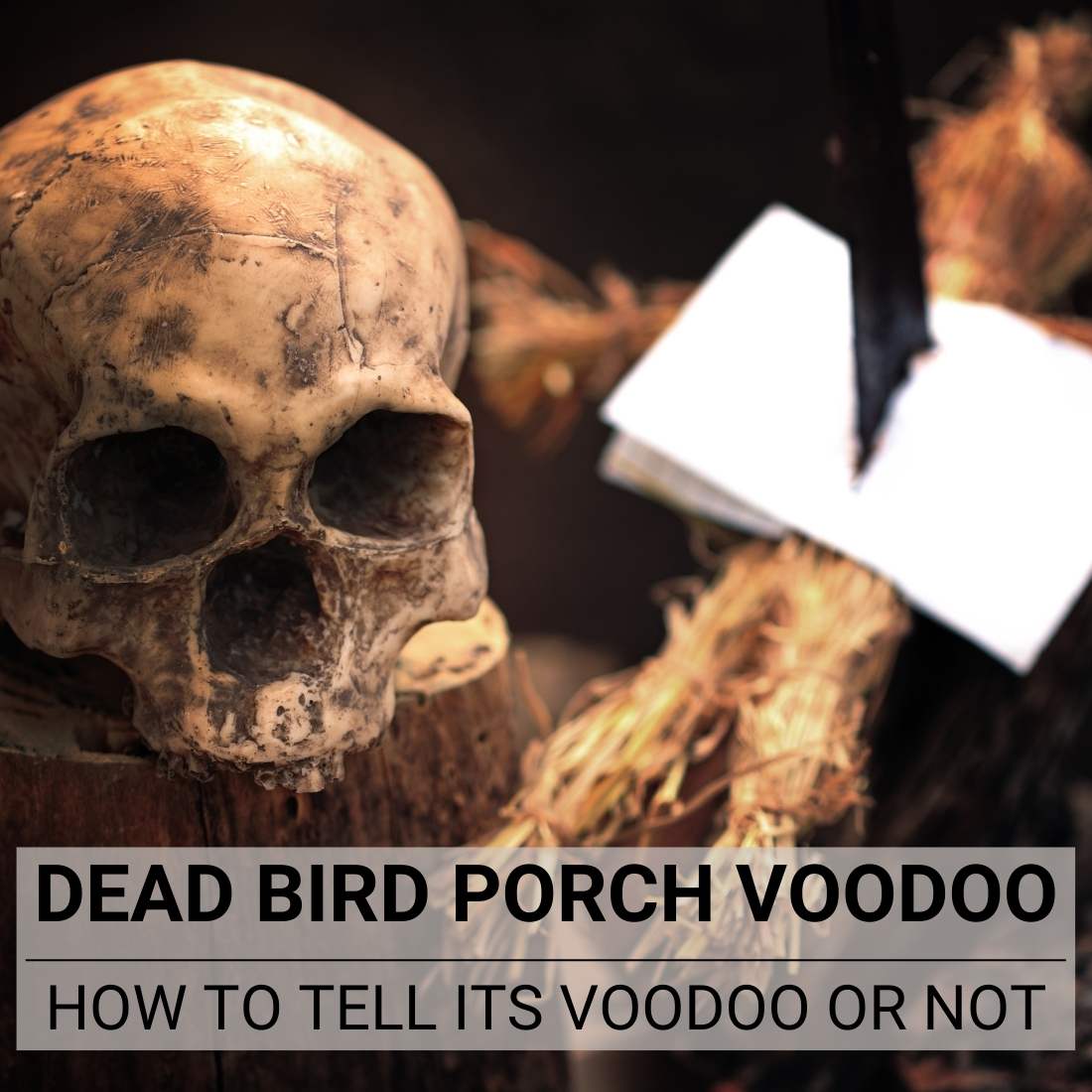 You found a dead bird on your porch. What do you do? Dead bird porch voodoo is a real thing, and it’s important to know what to do if this happens to you.

Keep reading if you want to learn about the potential reasons for stumbling upon a dead bird, the powerful spiritual meaning it may hide, and if voodoo even might play a role!

It is very unsettling to see a dead bird at the front door. The door to our home is the boundary protecting us from the outside world. Spotting a dead bird can feel like a violation of that boundary. You should not worry that this event would affect you or any of your family members in any negative way.

Just the fact that you wondered about the meaning of the dead bird shows that you can recognize spiritual messages. Deads birds are believed to be the souls of our beloved ones. They are also thought to be messengers because of how close to the skies they fly. Finding a dead bird at the front door could signify that your house has been visited by a soul.

The dead bird represents an obstacle to your plans. However, this is not necessarily a bad thing. Maybe the things you desire are just not right for you. This event could be a suggestion to change your life’s direction.

If your main worry was that the dead bird was placed at your door by someone who practices voodoo, you can breathe easier. Worshiping the devil, and performing black magic rituals do not exist in the voodoo practices. The only thing the person or a child who placed the dead bird could accomplish is to frighten you.

If you stay focused on the dead bird, it will drain all your energy, and the jokester in question will achieve its goal. The best advice is to brush it off and move on with your daily life.

The reason for seeing a dead bird on the doorstep could also be a cat. If you do not own a cat, it might be the neighbor’s furry friend. Although we associate cats, especially black cats, with witches and black magic, the neighbor does not necessarily have to be a witch or a wizard. It is an entirely natural cat behavior to bring gifts to the doorstep. The cats simply show affection this way.

People in the West associate Voodoo with darkness, magic, hexes, and sacrifices. However, this entire list of dark occult associations is merely a product of popular imagination. The only part which is accurate is the animal sacrifice. Animal sacrifices are often used in Voodoo religious practice. The animals in question are, more often than not, birds.

Voodoo bird sacrifices around the world

In Haiti, Voodoo practitioners sacrifice the chicken and offer them to the pantheon of spirits named Loa. In the remaining part of the ceremony, the spirits provide help, advice, and healing to the people.

In Benin, chickens are sacrificed on National Voodoo Day, celebrated every year on January 10th. The sacrifice is made in the name of the ancestors as an act of remembrance. If you want to learn more about the west African voodoo practices, check this Togo And Benin: Voodoo Traditions Of West Africa video which is part of Art Wolfe’s Travels to the Edge series.

According to Wildlife SOS, dead barn owls are often used in Voodoo magic in India. Their body parts, including the skull, feathers, bones, blood, and beaks, are thought to attract wealth. The barn owls are also used in black magic rituals where they are sacrificed to harm or kill the victim (check out our post about dead owl symbolism).

This is why it’s important to understand the different meanings and symbolism associated with dead birds (click the link and check the related post). Dead birds can represent a variety of things, both positive and negative. So, if you find a dead bird on your porch, don’t panic! Just take a deep breath and try to figure out what the bird is trying to tell you.

No Voodoo ritual involves killing a bird and placing it at the front door. The birds are sacrificed at sacred places with a religious intent to provide healing and betterment to the believer’s life.

If you are afraid that any other type of black magic was involved, there are two questions you can ask yourself.

First, what did the bird look like? If the bird was intact with all of its body parts, it probably was not killed for any malevolent reason. Moreover, the rituals are often performed secretly to use the power of blood. Therefore, it is little likely that the dead bird would be placed so conspicuously at your front door. If any magic was involved you would not be able to find any visible clues.

The second question you can ask yourself is how you have been feeling lately. Black magic attacks the nervous system, which can manifest itself as a general feeling of unease. More specifically, a person may feel the following symptoms:

However, there is a theory that the most significant power of Voodoo, or for that matter, any magic, lies in the psychological distress it causes to the person believing in magic. You may become so scared that you may bring the symptoms on yourself.

The dead bird was an unpleasant experience. However, you choose whether you want to see the good or the bad in everything.

I choose to see the good. If I were to see a dead bird, I would only look at it as an unfortunate animal. Let go of the catastrophic scenarios and anxiety-driven thoughts. The key to battling negative energy is preserving the purity of your mind and heart. Do not let anyone or anything spoil your inner peace.

Dead birds can have different meanings and symbolism associated with them. If you find a dead bird on your porch, try to figure out what the bird is trying to tell you.

There is a theory that the most significant power of Voodoo, or for that matter, any magic, lies in the psychological distress it causes to the person believing in magic. You may become so scared that you may bring the symptoms on yourself.