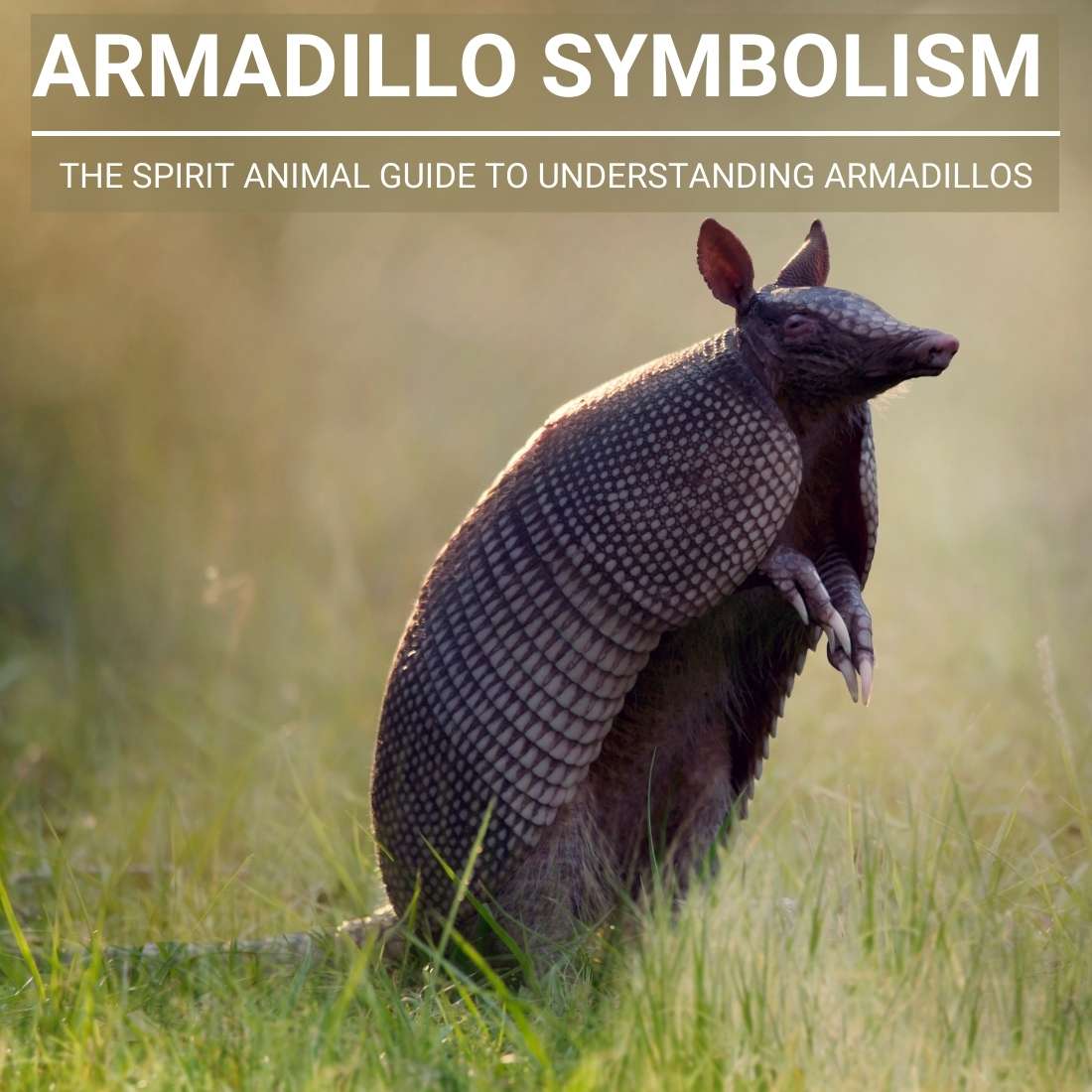 The Armadillo is a small, spiny mammal found in North and South America. These creatures are interesting and unique, due to their armor-like shell. Armadillos are often symbolic of strength and protection. In this blog post, we will explore the symbolism and spiritual meaning of Armadillos. We will also discuss the animal totem of the Armadillo. If you are interested in learning more about this fascinating creature, read on!

Revered by many for being the only living mammal that scurries around in a shell, armadillos are some of the most fascinating yet extraordinary creatures that swiftly move into our presence with deep spiritual meanings. While they can do a considerable amount of damage to our lawns and backyards due to their incessant burrowing, this generally solitary animal offers much more than a sense of security and self-preservation. Dubbed as the “little armored one” in some cultures, let’s dig into the awesome armadillo symbolism.

“What joy when the insouciant armadillo glances at us and doesn’t quicken his trotting across the track into the palm brush. What is this joy? That no animal falters but knows what it must do?”

What does an armadillo symbolize?

Recognized for its longer-than-normal snout that allows them to sniff out food from up to 8 inches beneath the ground, an encounter with an armadillo brings a host of wonderful symbolism to our lives. From self-defense and being over-protective to having persistence, determination, and staying firm, here’s what running into an armadillo means.

Known for perhaps the best defensive strategy across the animal kingdom, several armadillo species can effortlessly roll into a ball when they feel threatened. Since these relatively calm creatures would rather hide behind their shells than aggressively defend themselves, their presence reminds us of how we can overcome difficulties and challenges through self-control and patience. While the armadillo symbolism invites us to be watchful and to constantly keep our guards up, this naturally cautious spirit animal stirs us to stay mindful of our environment and to be on the lookout for who we trust.

Pull out all the stops

Using their huge front claws and strong legs, armadillos need to dig at least 5 inches deep into the ground in search of their meals. While such perseverance leaves unsightly holes in our well-manicured lawns, it represents how working hard makes us feel good about ourselves and gives a boost to our self-confidence. Not only does it inspire those who are around us to take on our lead, but it also shows us what we are truly capable of if we put our minds and hearts to it.

Having a stout heart

While the armadillo goes through its entire lifetime with impaired eyesight, its tough and sturdy body armor allows them to remain efficient and face countless insurmountable challenges and manage to survive. Mostly thriving in places where food is scarce and conditions can be harsh, their ability to endure days without food and water indicates how our skills and talents are often enough to get the better of our anxieties and hardships. Prospering in their remoteness and individuality, they would often whisk into our presence in times of self-doubt to remind us of our value and that we are undeniably competent and significant.

Along with a diet that consists mainly of plants, reptiles, insects, and the occasional amphibian, the armadillo rarely shows any form of aggression even when facing predators head-on. Its strong armor, as well as its unique ability to roll into a firm and unyielding protective ball, symbolizes our need for security and our longing for a place where we can hide from disorder and adversity. While most people see them as an image of shelter and protection, there are some who portray their sudden appearance as that of creating boundaries and safeguarding the personal space that we enjoy. An animal that is naturally more proficient scours for food, and mates at night, they indicate our capacity to perform our duties and to complete tasks effectively even without being praised by others.

The armadillo’s fondness for burrowing and finding hidden treasures and talents illustrates our own ability to discover the amazing skills and the righteousness of others. Always at the ready to put up its defenses at the first sign of a threat, this generally gentle mammal stirs us to remain cautious and vigilant of the risks that may abound.

While this spirit animal is one of a handful of creatures that can recognize the life that exists below the ground, the armadillo symbolism teaches us to acknowledge and embrace the hidden character of others and to be more understanding of their feeling and perspectives. Instinctively obscure and distant, its unexpected appearance represents our need to withdraw into a place of peace as it promotes personal and spiritual progress.

Detached, unsociable, and reserved, those who have the armadillo as their totem animal are perceived to be typically withdrawn and introverted. While they do not necessarily push others away, they inspire us to have confidence in our own abilities for they are often enough to provide a life of prosperity and success. Seen by many as a figure that represents arrogance and self-importance, these often misunderstood creatures are genuinely affectionate, gentle, and kind. Although they prefer to lead a quiet, solitary life, their image spurs us to flourish and grow into some of the most successful and pleasing individuals.

Commonly unobtrusive and shy, the armadillo scampers into our consciousness to teach us how to be calm, peaceful, and patient. An ideal animal totem for those who are constantly fearful, apprehensive, and distressed, they encourage us to dig deeper within ourselves and to awaken a more adventurous side that we didn’t know existed. While their unique features set several cultures to see them as creatures that set limits and build walls, this exceptional totem animal helps us create an atmosphere of respect, understanding, and tenderness.

The armadillo is a unique animal that has been seen as both an armor and guardian of boundaries. Its medicine deals with everything needing protection or having some sort of separation, such as the self from other aspects of humanity.

The shell covering its back can be seen as similar to what Native Americans would use for decoration; however, this practice may also symbolize how they felt about being split into two separate nations after European Contact became prevalent during colonization periods.

In the bible, Armadillos are not specifically mentioned. However, they are seen as a representation of gluttony and slothfulness. Armadillos are also known to be carriers of leprosy, which could be another reason why they were seen in a negative light.

Armadillos have been around for millions of years, and their symbolism has been present in many cultures. Whether you see the Armadillo as a positive or negative symbol, there is no doubt that this animal has an important place in our history and our hearts.

The armadillo is a bizarre animal that lacks any defining traits. It cannot be found in significant parts of Asian geography or cultures, either because they have different symbolisms for protection and inner wisdom or just don’t care about this particular creature at all!

Meaning of dreaming of an Armadillo

If you have seen an Armadillo in your dream, it usually symbolizes that you are feeling defensive about something. The Armadillo can also be a warning sign about someone or something that is not what it seems. This person or thing may be harmful to you. Alternatively, the Armadillo may represent your own hardshell and how you need to let your guard down sometimes. If the Armadillo was crossing your path, this indicates that you will have good luck in business ventures.

The Armadillo is also a symbol of secrets and truths that were once hidden but are now emerging to the surface. These past issues need exposure so they can be released into our universe, which will allow you to move on in your life.

If you dream about an armadillo, it may be a warning sign that there is something trapping your life and preventing you from living the way you want. It symbolizes protection against attacks by other people who have evil intentions toward us; this can mean security or isolation.

If you dream about them then there is probably something that needs protection in this life or recently happened which has made armchair security seem necessary for some reason?

With their armor plating and strategic shellacking technique, they’re awesome at defending themselves against any attacker–including bad vibes from other humans!

A one-of-a-kind creature with unique traits and features, the armadillo has long been regarded as an animal that signifies protection, perseverance, and fortitude. While they are not as adventurous or ferocious as most of their peers, this calm, solitary, and seemingly impenetrable spirit guide prove that each of us has the capacity to awe, inspire, and prove that there is much more to us than meets the eye.