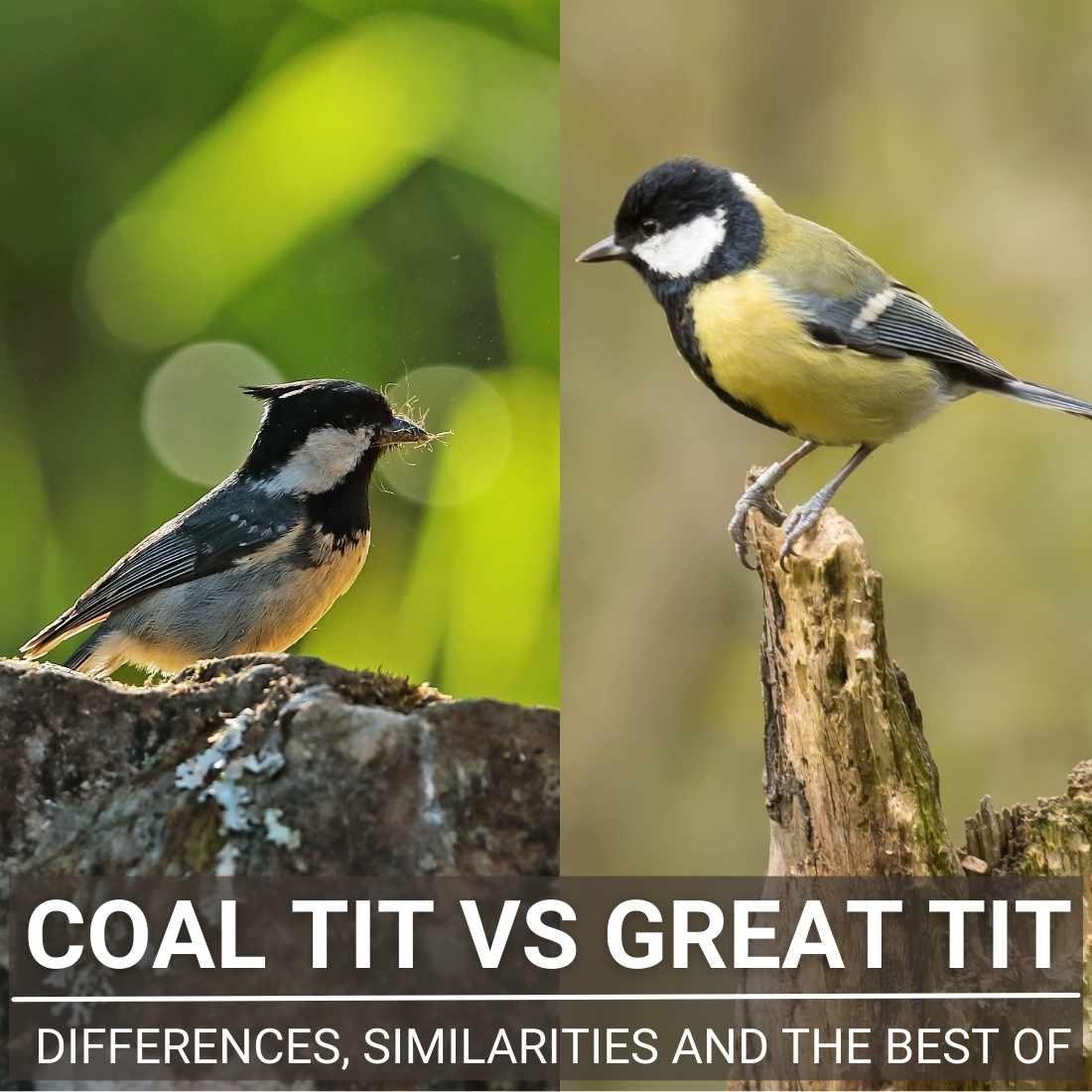 Coal Tits and Great Tits are both commonly observed bird species belonging to the tit family Paridae. These birds can be found in Europe, Asia, the UK, and Africa. Because they are so similar in so many aspects, including their habitat and some of their traits, it is common for people to have difficulties telling the difference between the two species. So let us have a look at the actual differences between a Coal Tit and a Great Tit.

The plumage color and nest size are the main features differentiating the Coal Tit and the Great Tit. Great Tits are a more assertive and striking species, with their dark green and yellowish plumage highlighted by a distinctive black stripe running down the center. Coal Tits have dullish-grey plumage with buff flecks and a few white spots. Additionally, coal tits are substantially smaller than great tits.

Great Tits are the largest member of their family. This is extremely helpful in differentiating them when they are both in the same site, such as a bird feeder in the garden or a remote location with difficult-to-distinguish plumage.

Great Tits are approximately 14.5 cm in length, with 24 cm wingspans, and weigh about 18 grams on average. In comparison, Coal Tits average a length of 12cm, a wingspan of 19.5cm, and a weight of 10 grams, all of which are much less than the great tit.

Coal Tits and Great Tits both have a significant native breeding population in the United Kingdom; however, a wintering population visits the area and spends time here during the colder months of the year. Both of these species may be found throughout the year in the bulk of the United Kingdom; however, there are a few locations in Scotland where they are not to be found.

Great Tits are often bigger, more forceful birds that commonly use their size to frighten and drive other birds away from feeders. However, due to the great tit’s size advantage, they often ‘win’ any competitions at feeders, while coal tits are more hesitant.

It is believed that great tits feed their chicks spiders, which have high taurine levels, which adds to their confident and intellectual nature.

Great Tits are particularly fond of sunflower seeds from bird feeders, so keep your feeders well-stocked to attract them to your yard.

Coal Tits have a particular affinity for conifer seeds, which accounts for their preference for coniferous woodlands. Additionally, they show a proclivity towards obtaining food and transporting it away from the area in order to conceal it and consume it later.

Some other key differences in Coal tit vs Great tit

There are many similarities between these two bird species, including the fact that they both belong to the Tit family and that they are both characterized by the presence of black crowns on their heads and white behind their eyes.

In addition, both the Coal tit and the Great tit are rather noisy in their communication. Both species are typically social and will congregate with other birds outside of the mating season, even other tits (birds) on rare occasions. Both coal tits and great tits have habitats that are quite similar to one another, which is one of the primary reasons that people have difficulty distinguishing between the two species.

Their natural habitats are similar, and both species like to be in places where there are trees, such as forests, parks, and gardens in counties, villages, and cities. Finally, both birds have diets that are quite similar to one another, consisting primarily of insects, worms, nuts, fruits, and grains.

Interesting facts about the Coal tit

Coal tits build their nests in holes in trees; however, unlike the other tit birds, they will also utilize holes in the ground from time to time. They begin to breed relatively early in the year and construct their nests entirely of moss, producing up to ten eggs each clutch. Both bird parents usually feed the chicks, and they may produce a second clutch on rare occasions. It is likely that they will utilize nest boxes, although they will choose ones with a tiny entry hole to decrease the chance of eviction by larger birds.

In addition, there are the following noteworthy facts about Coal tits:

Here you can check all Coal tit sounds

Interesting facts about the Great Tit

The great tits are an extremely loud species of bird. Their song is a repeating two-note descending call, generally characterized as ‘tea-cheir, tea-cheir!’ This song is quite similar to the coal tit song, and the two are sometimes mistaken, but the great tit call is normally lower and slower as compared to coal tit.

Here you can check all the Great tit sounds

Both the coal tit and the great tit are quite vocal. Outside of the mating season, both birds frequently congregate with other birds and occasionally with other tit family birds. Both coal tits and great tits have a similar habitat, which is one of the primary reasons people have difficulty distinguishing the two. However, the great tit is bigger and has a longer lifespan than the coal tit.