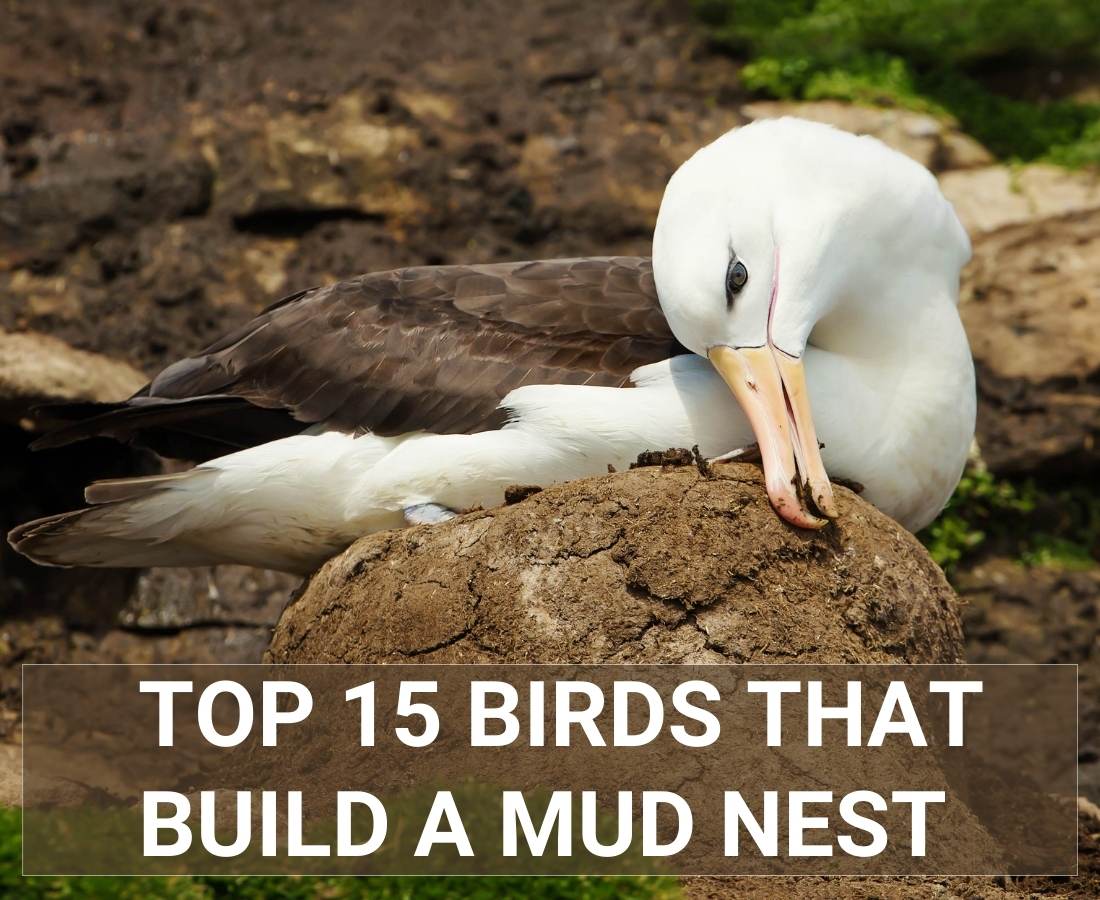 Don’t all birds don’t build the same nests? They sure don’t! Many birds build mud nests, which are made out of mud.

Certain birds, such as the American Flamingo or the Purple Martin, use their natural abilities to build homes to nest and lay eggs on wet soil and earth. Follow along for the top 15 birds that build a mud nest.

Rufous Hornero is a South American bird species in the ovenbird family. The plumage is overall reddish-brown, with darker wings and tail. The bill is black and slightly down-curved.

This species builds an extensive mud nest, which it places on trees, rocks, buildings, or any other suitable structure. Both sexes help construct the nest, which takes around two weeks to build.

The Spotted Morning Thrush is a small songbird found in Central and South American forests. The bird gets its name from the two black spots on its white throat.

The Spotted Morning Thrush builds its nest out of mud and twigs, which it collects from the forest floor. The bird uses its beak to shape the mud into a cup-like structure.

The white-winged chough is native to Australia, Indonesia, and New Guinea. This bird has black plumage, a glossy sheen, red eyes, and white wing patches.

It builds its nests out of mud pellets held together with saliva. The female lays 3-5 eggs incubated for 18-21 days. The chicks fledge after about 42 days but remain dependent on their parents for several months.

The red-rumped swallow is a small passerine bird in the swallow family. It breeds in Africa, Asia, and southern Europe.

The adult has dark blue upperparts with a rufous rump and tail. The underparts are white with a reddish breast. The bill, legs, and feet are black.

The red-rumped swallow builds its mud nest on any vertical surface, such as a cliff face, tree trunk, or man-made structure like a building.

Check out this video for more information on how swallows adapted to make mud nests!

The apostlebird is a small, stocky bird found in Australia. Apostlebirds are generally found in dry open woodlands but will also inhabit mallee scrub and spinifex grasslands.

Apostle birds build mud nests. The mud is collected from the ground and mixed with water to form a sticky paste. This paste is then used to construct a small, cup-shaped nest.

These birds are unique in their nesting habits, as they will only nest in mud nests. The process starts with the male collecting mud from nearby bodies of water.

Once they have enough mud, they will start constructing the nest by shaping it with their beak and body. As the male builds the nest, the female will help by adding saliva and feathers. Once the nest is complete, the pair will mate and lay eggs inside.

Cave Swallow is a small songbird that lives in caves, crevices, and cliffs in North, Central, and South America. The bird is blue-gray above with a paler underbelly and rusty throat.

The female builds a mud nest on a ledge inside a cave or other sheltered site. She lays 2-6 eggs which hatch in about two weeks.

Eastern Phoebes typically eat insects, such as flies and beetles. They capture their prey in mid-air or by picking it off the ground. These birds often hunt near water, where insects are abundant.

These birds are easily recognizable by their dark gray plumage and white underparts. They are also known for their mud nests, which they build on ledges and other structures.

Cliff swallows are another species of bird that make their nests out of mud. These birds typically build their nests in a variety of locations.

Cliff swallow populations have recently declined due to habitat loss and degradation. Nesting sites are often disturbed by human activity, and food availability has decreased as agricultural land is converted to other uses.

The barn swallow is sexually dimorphic, meaning the male and female look different. The barn swallows nests in colonies of mud nests which it builds on buildings or cliffs.

It lays 3-7 white eggs per nest, which hatch after 13-19 days. Both parents help to feed the young birds until they are old enough to fly and hunt on their own.

The adult Black Phoebe is grey-black on the upper parts, with a paler grey throat and breast and a black belly. The wings are dark with two white bars.

Watching the black-billed magpie use its beak and feet to create a structure that will house it and its young is amazing.

The nests can be found in many locations, showing the species’ adaptability. The Black-eyed Magpie has become a popular bird in many parts of the world due to its unique nesting habits.

American flamingos are gregarious birds that live in colonies of up to several thousand individuals. They construct mud nests on the ground. Both sexes help to build the nest, which takes about two weeks to complete.

The house martin is strongly associated with human habitation and often nests on buildings. It is a fairly small bird, with a black back and white underparts.

The house martin builds its nest from mud pellets the bird collects in its beak while flying. The pellets are deposited on a suitable site before the female is ready to lay her eggs.

Hamerkops are native to Africa and Asia and typically live near water. Hamerkops use their beaks to create little mud balls, which they then use to construct their nests.

These nests can be quite large and sometimes even house other animals! If you’re lucky enough to see one of these birds in the wild, they’ll surely be impressed by their impressive nest-building skills.

Bonus Bird that builds its nest out of mud: Black-browed Albatross

Black-browed albatross are found over the Antarctic, subantarctic and sub-tropical waters. They build their nests from mud, grass, seaweed, and guano, on a volcano-shaped mound. The single egg is incubated for 71 days. The chick is brooded during its first weeks and fledges at about 120 days old.