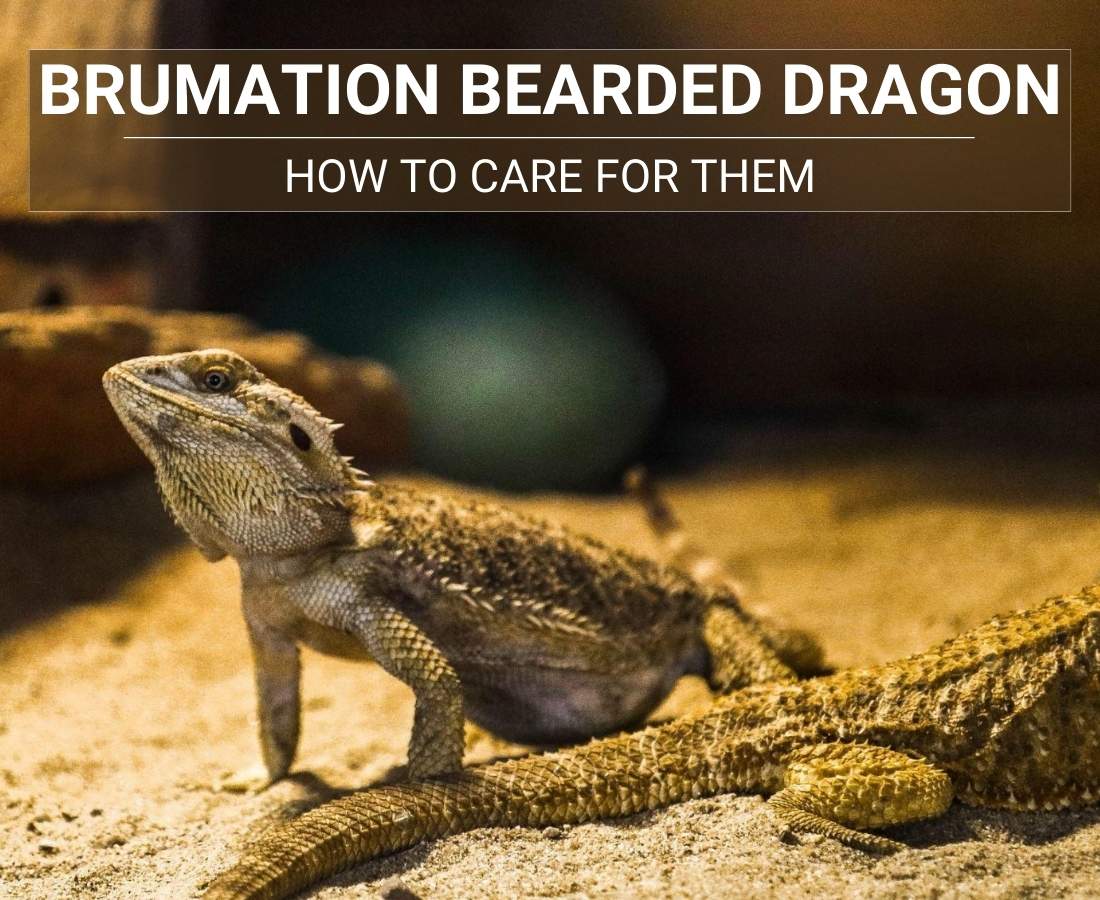 If your kids love reptiles, consider getting them a pet lizard. Bearded Dragons are the most popular pet reptiles; people love them as they are safe, occupy little space, and don’t need much attention.

Signs Your Bearded Dragon is Going into Brumation

As your dragon prepares to go into brumation, you need to know the signs to watch out for but first, click here for the most in-depth guide to brumation in bearded dragons.

If your bearded dragon is eating less every other day, it’s a sign that its body is preparing for brumation.

As winter starts, plants die out in the wild, meaning crickets and other insects will also disappear. This prompts the bearded dragon to start the brumation process as food becomes scarce. Although food is not lacking in captivity, weather changes encourage them to go into brumation.

As your bearded dragon enters brumation, they become more sluggish and don’t want to use any energy. They will move less and less to preserve their energy for this period of hibernation.

Although bearded dragons leave their mouths open to regulate their temperature, especially when sitting near heating lamps. It’s been observed that they also leave their mouth open during brumation to conserve their energy.

During brumation, your dragon will hide in a corner away from the sunlight to preserve its energy. They do this to retain their body heat.

As your bearded dragon goes into brumation, you’ll notice that the poo becomes less and less until there is nothing. This is mainly because their feeding reduces until they don’t feed anymore. To avoid complications, every owner should ensure that your bearded dragon enters brumation with zero food in their bellies.

As your dragon enters brumation, they will spend more time sleeping than being awake as it helps them conserve energy. This is the most common telltale sign of brumation as most bearded dragons are generally quite active during the day.

What Triggers Brumation in Bearded Dragons?

Bearded dragons are attuned to notice changes in the environment, so when the winter months approach, your pet can see that the light hours are changing, meaning reduced daylight hours and cooler temperatures. This prompts them to prepare for brumation.

Since the temperature and lighting are controlled for bearded dragons, it might be confusing as their bodies are programmed to sleep, but the environment is not supporting their way of life. As such, your bearded dragon will not go into a full-on brumation. Instead, they will display signs of brumation, such as lethargy, sleepiness, and lack of appetite.

How Long Does Brumation Last?

Bearded dragons do not have a specific period when their brumation will end. They can stay in hibernation for several weeks to four months. However, in the wild, brumation ends when winter comes to an end.

In captivity, bearded dragons do not go into total hibernation; they will just be sluggish. Most often, they will sleep for a few days, then come out of hibernation for a few days and go back to sleep. This will be an on-and-off situation until the cold season ends. If you want your bearded dragon to go into full-on hibernation, set up winter temperatures and lighting cycles to encourage them.

Is Brumation a Process Every Bearded Dragon Goes Through?

In the wild, all bearded dragons brumate during winter. However, in captivity, several pet owners attest to never having seen their bearded dragons going into brumation. But since brumation in captivity does not often involve going into total hibernation, pet owners might not notice that their pets are brumating. However, if you are keen, you’ll see subtle changes, such as decreased appetite and lethargy.

Brumation is a process most reptiles must undergo, especially during winter, as it helps with breeding. However, for bearded dragons, brumation does not help with breeding as they are prolific breeders. But it’s believed to prolong their lives.

How Often Does Brumation in Bearded Dragons Take Place?

Out in the wild, bearded dragons brumate once per year during winter. However, domesticated bearded dragons do not have a set time as their owners control their environment. So, to induce brumation, they have to set winter temperatures and reduce light hours. For instance, a bearded dragon brumation may take place:

This is because each bearded dragon is different from the other, and their brumation patterns also vary. So watch your pet closely to identify signs of brumation and take care of them accordingly.

What Can You Do to Ensure Your Bearded Dragon is Safe During Brumation?

You are not supposed to feed your dragon during brumation, particularly if they brumate deeply. And when you notice signs of brumation, take the necessary measures and prepare by following these five steps.

Before winter approaches, schedule a vet check-up for your bearded dragon. The vets check whether your pet is healthy and rules out the presence of parasites. They also update your pet’s file should it ever get ill.

The vets rule out the presence of parasites because they can cause severe illness or even death for your bearded dragon during brumation. This is because, during this period, your pet’s immune system is not as strong, allowing the parasites to wreak havoc in its body within a short time.

Set up the heating and lighting equipment in the bearded dragon tank. Ensure you can adjust the equipment to replicate their natural habitat during summer and winter. Use a thermostat and input the correct temperature settings, and in case of weather changes, you won’t have to be concerned as it will adjust itself accordingly.

During summer, you should aim to maintain the temperatures between 95 -105 degrees Fahrenheit, especially during the day, and not below 70 degrees Fahrenheit at night. And the light hours should range from 12 to 14 hours.

During winter, the temperatures should be reduced to 80 degrees Fahrenheit during the day and 60-75 degrees Fahrenheit at night. The light hours should also be reduced to around 8 to 12 hours. And once your bearded dragon enters brumation fully, you can switch off the lights, creating an environment close to their natural habitat during brumation.

Caution: do not let the temperatures drop below 60 degrees Fahrenheit, especially if your dragon is underage, ill, or has parasites. This is because the low temperatures accelerate the spread of parasites or illness and can even lead to death.

During brumation, bearded dragons prefer to burrow in a cave or sand in their natural habitat. So replicate this by creating a hiding spot.

You can use a branch with some foliage or a box with some hay on top. Ensure that the things you use are not flammable since you might have a heating system in the dragon’s house.

Monitor Its Feeding and Stool

As your bearded dragon enters brumation, you should reduce the food intake as it should never brumate with a stomach full of food. This is because no digestion will occur when it sleeps, leading to food rotting in the stomach.

So as winter nears, start reducing the food until you are sure nothing is in its belly.

Monitor Its Health and Hydrate

Ensure you can access the hiding spot to monitor and weigh your bearded dragon once it enters brumation. Before it starts brumating, weigh your pet and keep a record throughout that period. Also, keep a small water basin in its house so it can drink once it feels like it.

If your dragon loses too much weight within a short period, notify your vet.

How to Take Care of Your Bearded Dragon during Brumation

During brumation, your dragon doesn’t need as much attention, but you’ll still need to provide them with care and maintain their habitat. You can do the following for a smooth brumation process.

Ensure that the lighting remains within the comfortable winter levels. It’s best if you replicate their natural habitat conditions.

Although they don’t eat during brumation, they’ll take a sip of water from time to time. So, place a small water bowl in the tank and replace it regularly to avoid infections.

Others recommend bathing your bearded dragon, as this will prompt them to drink a little water without expending much energy. Hold their head to prevent them from drowning.

Most dragons don’t eat during brumation, but if you notice they are interested, offer them a small amount of easily digestible food. However, ensure they don’t go back to sleep immediately after eating as the food won’t be digested. Keep them busy and expose them to UVB as it speeds up digestion.

Ensure that your dragon is sleeping in a clean environment. This will help keep away bacteria and parasites that can cause illnesses.

Lizards have a deep spiritual significance and that makes them unique as pets, among other things. Another unique aspect of a pet lizard, such as a bearded dragon, is the brumation process.

Brumation is common among reptiles, and bearded dragons are no exception. As your dragon goes into brumation, you’ll notice signs such as the fact that its appetite decreases, it becomes lethargic, and it constantly sleeps. This is a sign that they are conserving energy for their hibernation or brumation period. Therefore, take your pet to the vet when you see these signs to get a clean bill of health and follow the tips above when caring for your brumating dragon.