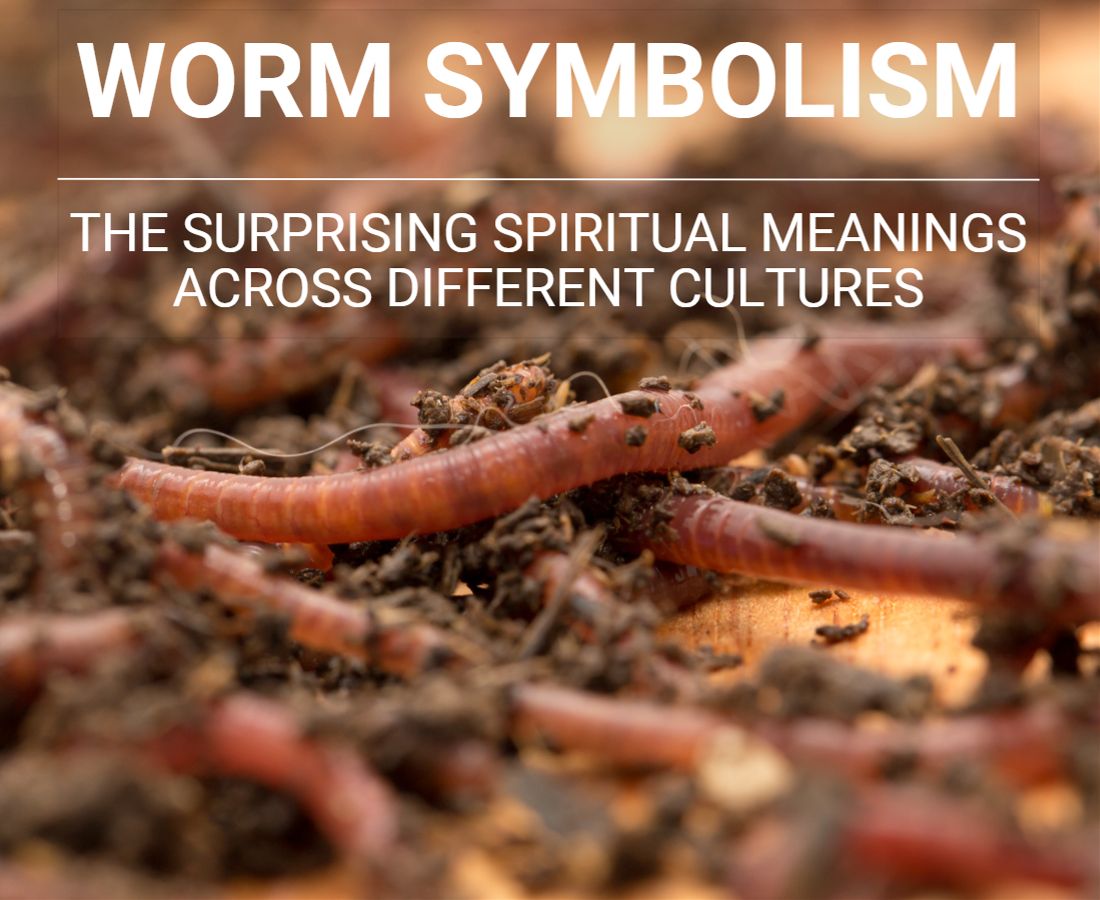 Often found thriving in the most unhospitable conditions, worms are a group of crawling species that spend most of their time creating complex underground networks. Varying in color, shape, and size, they go through their entire life without growing limbs and eyes. While they are fond of damp earth and mossy, decaying materials, they are believed to inch in with great symbolic meaning.

Recognized for playing such a crucial role in gardens and farmlands for centuries, let’s wriggle into the fascinating worm symbolism.

“The early bird may get the worm, but its the second mouse that gets the cheese.”

What do worms symbolize?

Worms survive a whole lifecycle without ever-growing eyes, ears, and legs, making their lives perhaps one of the most challenging on earth. We broke down what these critters symbolize to help clear the air for those who still squirm at their appearance.

Worms spend their whole life with their bodies on the ground, which reminds us of the importance of staying grounded and being modest. Since they are easy prey to almost every other animal, it indicates the value of sharing our skills and talents with others. They tell us that regardless of our size, we can still be a joy to others and go after the things we desire.

Worms are seen as symbols of power and perseverance in many cultures. Their five hearts, which pump blood through their long and slender bodies, are a symbol of their ability to endure and overcome challenges. They are often associated with resilience and determination, their underground existence also represents the hidden strength within us.

Worms have long been seen as a symbol of spiritual enlightenment and the endless cycle of life – from death to rebirth. In many cultures, they are revered for their transformative power in turning what was once dead matter into new soil capable of sustaining future generations.

The humble worm serves as an inspiring reminder that even out at death, there is still a great potential for renewal and to create of something beautiful in its place!

Often vulnerable to attacks from much larger and more agile creatures, worms rely on their limited physical strength to writhe and twist through hindrances. Although typically slow, they teach us how constant and steady strides are better than failing to move forward. Apart from telling us that a period of prosperity is about to take place, a worm’s presence suggests that we slow down and take the time to appreciate life’s meaningful and quiet moments.

The worm symbolism is often associated with fertility due to its hermaphroditic nature and the presence of both male and female reproductive organs. They are considered powerful symbols of creation and new life in many cultures. Their ability to reproduce adds to their association with fertility and is also seen as a symbol of spiritual growth.

Also, if you cut an earthworm in half, both pieces will continue to live, further emphasizing their association with regeneration and new beginnings.

Found in the soil of every continent except Antarctica, it’s no surprise that worms have wriggled their way into the world’s various cultures and traditions. Notorious for their ability to swarm and infest, here’s how worms are viewed in different myths and legends.

A North-East England story that has been around for centuries, the Lambton Worm is a legend that revolves around John Lambton and his encounters with a giant worm that terrorized nearby villages. According to the story, a young John Lambton missed church one Sunday to go down the river and fish. Instead of a fish, John hooked a small worm which he discarded in a nearby well.

The worm grew extremely large and emerged from the well to coil itself around a hill. The worm sowed fear in nearby villages by eating sheep and snatching away small children. Any attempts to kill the beast were unsuccessful, for it could reattach pieces of its body to itself. The story ended when John returned to defeat the worm, but not before leaving the Lambton family with a curse.

Perceived to reside in the remotest areas of the Gobi desert, the Mongolian Death Worm is a highly venomous two feet-long creature that can instantly kill with even the slightest touch. The Mongolian Death Worm is a thick worm of dark red color and was believed to have spikes sticking out of its body, which it effectively uses to strike when disturbed. Legend says that while the worm remains hidden in the sands, locals are terrified of it and skip places they fear it hides.

Often illustrated as a gigantic sea dragon, the Stoor Worm was an evil creature that contaminated plants and could kill animals and humans with its fetid breath. The Stoor Worm was believed to be an inhabitant of the sea. Legend tells us that the beast threatened the lives of everyone in an ancient kingdom unless he was appeased weekly with seven virgins.

Desperate, the king challenged anyone brave enough to try to destroy the monster in exchange for his kingdom, Odin’s sword, and his daughter’s hand in marriage. Ultimately, a young farm boy named Assipattle defeated the creature. Its teeth fell out and became the islands of Faroes, Orkney, and Shetland, while its body became Iceland.

The Loch Ness Sea Monster, a creature said to live in the Highlands of Scotland, is believed to have started its life as a tiny sea worm not bigger than a person’s thumbnail. Affectionately referred to as Nessie, its legends go back to the first century when Romans landed in Northern Scotland. It was initially described as an unrecognizable animal with an elongated beak, a spout, and flippers.

While it is not the only monster that has captured the imagination of the Scotts (i.e. The Worm of Linton), it has gained much prominence due to its many perceived sightings, pictures, and depictions.

Earthworms are known by many names, including “the intestines of the earth” – a moniker coined long ago by Aristotle. For the ancient Greeks, the worm symbolism was spiritual growth and death-rebirth. Aristotle linked their metamorphosis to enlightenment, and they were also associated with the underworld.

Native Americans viewed worms with a unique reverence, attributing to them symbolic meaning and spiritual significance. To these tribes, the humble worm was believed to be an envoy of the Great Spirit as well as a connecter between life on earth and the afterlife – even playing a role in healing ceremonies by removing negative energy from bodies.

In some cases they were also consumed for sustenance; not uncommonly dried and ground into powder for use in cooking like any other foodstuff!

“If man makes himself a worm he must not complain when he is trodden on.”

Denied the gift of sight, worms survive through a heightened sense of touch and sensitivity from vibrations. Their presence reminds us how we should trust our feelings and constantly act on them. Worms inspire us to be adaptable to life’s challenges.

A worm appears to tell us that we should sometimes dig deep into the past as it allows us to work through issues that have long brought anxiety and distress. Since they are perhaps the most vulnerable to predators, worms teach us to be more cautious and to think twice before we act.

The worm symbolism and the worm spirit animal are powerful symbols of transformation and growth. It encourages us to use our emotions as fuel for progress, even in the darkness on the way to sunlight or the most challenging of times. Like how the earthly creature can dig through dirt and find nourishment from decay, it calls upon us to uncover hidden potentials within ourselves—to harvest inspiration out of desperation.

The worm’s ability to turn decay into nourishment is a reminder of the abundance that can be found in every situation. The worm spirit animal teaches us to find the sunlight in the darkest of places and to turn negative experiences into something positive.

The worm is a mysterious creature that symbolizes strength in the face of transformation. Representing our ability to use emotions for growth and discovery, it encourages us to stay rooted even when going through difficult changes. Drawing its power from below ground, this animal totem invites us on an adventure as we explore both ourselves – and life’s hidden depths!

As an animal totem, the worm teaches us to never give up and stay determined. It also serves as a reminder that sometimes we must be flexible when faced with challenging circumstances; much like the resourceful worms which can thrive in diverse climates!

The worm spirit animal encourages us to seek out the hidden potential and blessings living within our lives. It reminds us that although difficult times may befall, these moments are gateways of transformation – offering a chance for renewal and discovery.

Dreaming of worms can be a powerful metaphor, symbolizing the process of peeling back layers to uncover hidden truths within our subconscious (some kind of breakthrough).

They may also represent feelings of disgust and contamination or even transformation similar to ancient Greek mythology – all influenced by personal experiences in your waking life. Consider carefully the details in order for you to gain greater insight into their meaning!