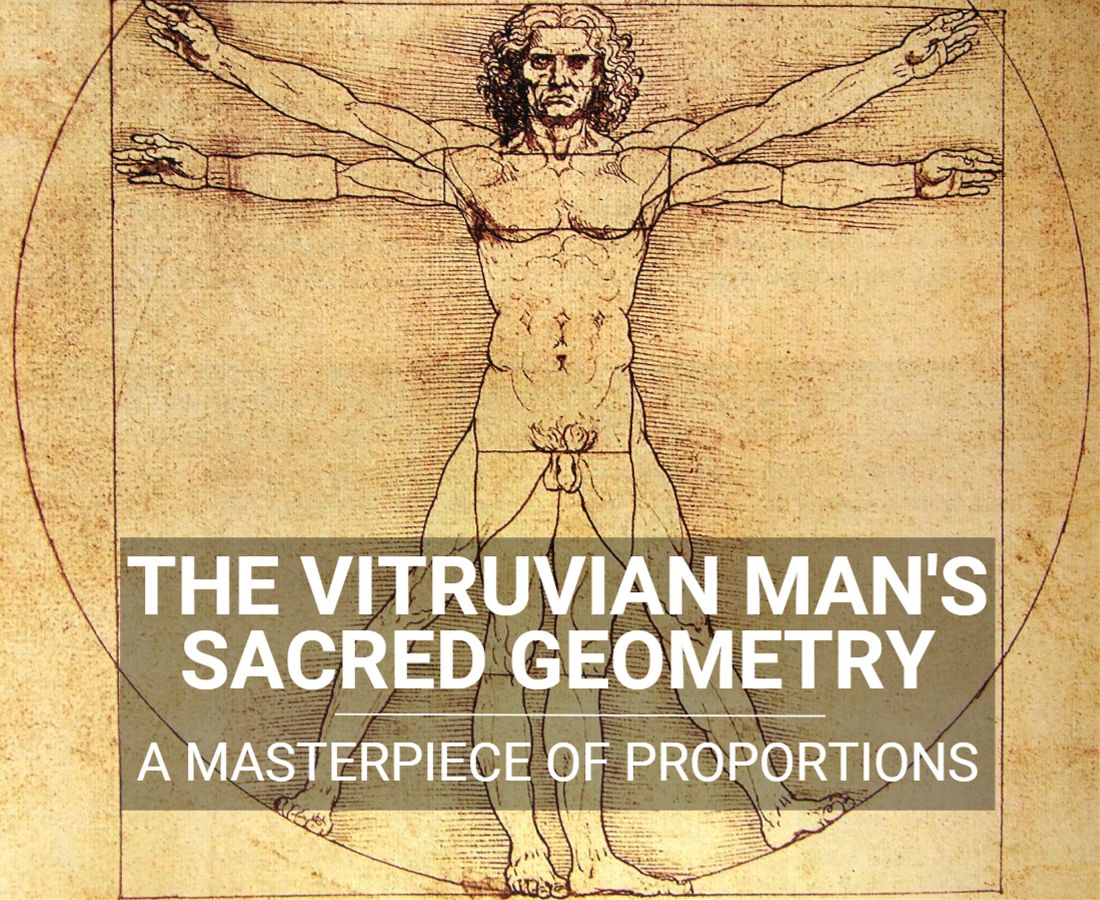 Sacred geometry is one of the most profound phenomena found all over the world. This universal concept explains the divine connection between all things, pointing to a design or creation by intelligence.

Everything has the ability to connect back to sacred geometry as a result of this divine connection, which can help verify that this phenomenon exists. The Vitruvian Man illustration is one of the best examples of this.

This article will explain what the Vitruvian man is, how it relates to sacred geometry, and examine the divine connection that exists within you.

“Simplicity is the ultimate sophistication.”

What is sacred geometry?

Sacred Geometry is the study of the patterns, shapes, and proportions found in nature and the cosmos. It is used in art, architecture, and spiritual practices.

The symbols of sacred geometry can be used for healing and understanding the underlying structure of the universe and create balance and harmony in the body and mind.

Sacred geometry and the Vitruvian man

The Vitruvian Man is a well-known drawing by Leonardo da Vinci, an Italian architect. It is based on the theories of ideal human proportions developed by the ancient Roman architect Vitruvius. It is presently a part of the Gallerie Dell’Accademia Venice’s collection.

The drawing has become famous for its depiction of Sacred Geometry, a system that combines mathematics and cosmology with spiritual symbolism and philosophy.

Sacred geometry studies natural phenomena and creates harmonious relationships between humans and nature by using forms such as circles, triangles, and squares. Da Vinci captured this perfect balance of form and function in his drawing of the Vitruvian Man – a perfect representation of this concept.

Davinci used mathematics to plan out his drawing in accordance with the golden ratio or “divine proportion” or Phi which has been known for its aesthetically pleasing qualities since ancient times.

This mathematical ratio has been revered by artists for centuries as a measure of beauty and harmony. In this piece, it can be seen in everything from the limbs to the overall proportions – creating an aesthetically pleasing figure that will stand out amongst any art collection!

This drawing utilizes a masterful use of symmetry, imbuing it with an overall feeling of balance and harmony. The graceful positioning of the limbs is echoed in the elegant employment of circles and other geometric shapes that captivate by bringing out its proportions and adding movement to complete this beautiful piece.

The image depicts a man with his arms outstretched inside a circle and a square, which represent the system of “sacred geometry”—the perfect mathematical proportions found in all things in nature. The combination of scientific accuracy and artistic beauty in this iconic image has been studied.

Leonardo’s drawing is regarded as a symbol of both human evolution and cosmic unity, transcending cultural boundaries and speaking to our shared experience regardless of religion or location. It is a humanistic representation of the ideal human body.

This image is a representation of the famous quote by the ancient Greek architect Vitruvius, who stated that “man is the measure of all things.”

The Vitruvian Man is an iconic representation of mathematical and physical harmony. Showing a man in two equilateral positions with his limbs stretched outwards, demonstrates how symmetry and proportion are intrinsically linked – concepts that have been understood since ancient times but masterfully brought to life by one of history’s greatest minds.

Is the Vitruvian man an accurate depiction?

The work has become an iconic image in art history as a representation of the classical “perfection” of the human form. But how accurate is this portrayal?

There has been some debate about whether da Vinci’s Vitruvian Man is an accurate representation of the human body. Some argue that it accurately depicts actual proportions or measurements for all individuals, while others argue that it does not reflect certain proportions found in nature and in humans.

Some anatomical features, such as arms and legs, are too small in comparison to their real-life counterparts. This is a reflection of the uniqueness of each individual aspect of creation, and even though something may seem different, there is still a divine connection present.

The connection between physics and the Vitruvian man

The Vitruvian Man captures not only beauty but also demonstrates how geometry relates to physics. Da Vinci used circles within circles to represent how our bodies move in nature and space; this perfectly illustrates classical mechanics, which explains motion using forces like gravity or friction.

This concept was revolutionary at the time, and it still holds true today in applied physics; understanding how objects interact with their surroundings is critical for scientific progress. This drawing’s circle also represents the cycle of life or the cycle in which all matter exists.

Life is an abstract concept that appears to have multiple meanings depending on the perspective and sense with which it is observed. When comparing the life of an animal to the light of a plant, for example, the two appear very different.

However, if you compare the lives of two dogs, they appear to be quite similar. This is due to their proximity to creation, but both animals and plants are still extensions of the same form of life.

The same can be said about a planet, star, or asteroid. In physics, it is agreed that these are made up of various elements, but at their core, they are made up of the same components that make up everything else in the universe, including humans.

Humanity as the universal mirror

As far as history is concerned, the human being is one of the universe’s most complex embodiments. Humans are an excellent example of sacred geometry as both a pattern and a conscious design.

The Vitruvian man depicts the human being as the archetype for life or existence because people are not only connected to the earth but also to the spiritual realm. Life appears to be a struggle in trying to find these connections and answers, answers that are frequently too grand or complex for the mind to comprehend.

Because the body is a manifestation of this spiritual concept, this is exactly where the Vitruvian man fits into sacred geometry. From one perspective, each individual person appears to be their own unique expression of the divine; however, when examined under a microscope, each body consists of the same cells, structures, and, eventually, atoms.

Individuality is then lost, and you are presented with the idea that all humans are connected and stem from the same source of creation and that when compared to other aspects of life, such as nature, the earth, or the solar system, there is a similar connection.

The flower of life in sacred geometry

The flower of life is one of the most well-known sacred geometry symbols. It is thought to represent the creation cycle and the unity of all forms of life.

The pattern has been discovered all over the world and throughout history, demonstrating that, while it may not be as common or familiar today, this symbol once played an important role in humanity. The flower of life has also remained unchanged throughout history, which is why it has become one of the spiritual community’s most fascinating symbols.

The flower of life appears to be made up of overlapping circles that combine to form a flower-like shape with six petals surrounding a central circle. The finished product resembles a Mandela or a stained-glass window.

Each circle represents a different form of life, and the overlapping portions of the circles represent the divine connection or creation that occurs between those circles. If you imagine every person on the planet as a circle, they would all overlap and intersect at different points, but if you take a step back, they all exist and are living on a single planet, which could be represented by the larger circle.

The Vitruvian Man represents both a single circle within the flower of life symbol and the larger circle. Inside, the Vitruvian Man has his own inner world, thoughts, emotions, and ideas, as well as his own unique creative experience. Outside, he interacts with the larger whole, and he is connected to everyone and everything.

There are also nice fashion and jewelry items for men and woman available. Also check this TED talk with 2.3 mill views below:

How does the Vitruvian Man relate to math?

Leonardo Da Vinci’s iconic Vitruvian Man showcases the use of mathematics in art – through a symbolic fusion of proportion, symmetry, and the Golden Ratio. This captivating representation of harmony brings to life how mathematical principles can be used to create beautiful images representing humanity itself.

What does the circle mean in the Vitruvian Man?

The circle in the Vitruvian Man perfectly captures the notion of perfection and completeness. Through its use of mathematical principles, such as proportion and symmetry, this iconic image symbolizes oneness with nature’s universe; while also highlighting our incredible human potential for creating beauty.

Why does the Vitruvian man have 4 arms?

The iconic Vitruvian Man of Leonardo da Vinci represents the perfect harmony between art, mathematics, and science. Its four arms depict a symmetry that is symbolic of universal balance as well as reflecting the four elements and cardinal directions – an idea filled with profound meaning.

What are the notes on the Vitruvian Man?

The notes on the Vitruvian Man are the annotations and explanations written by Leonardo da Vinci himself. They provide insight into his thought process, methods and the principles used in creating the drawing. The notes include observations about the proportions of the human body, the use of mathematical ratios and the symmetry used in the drawing. They also provide information about the symbolism and the meaning behind the image.