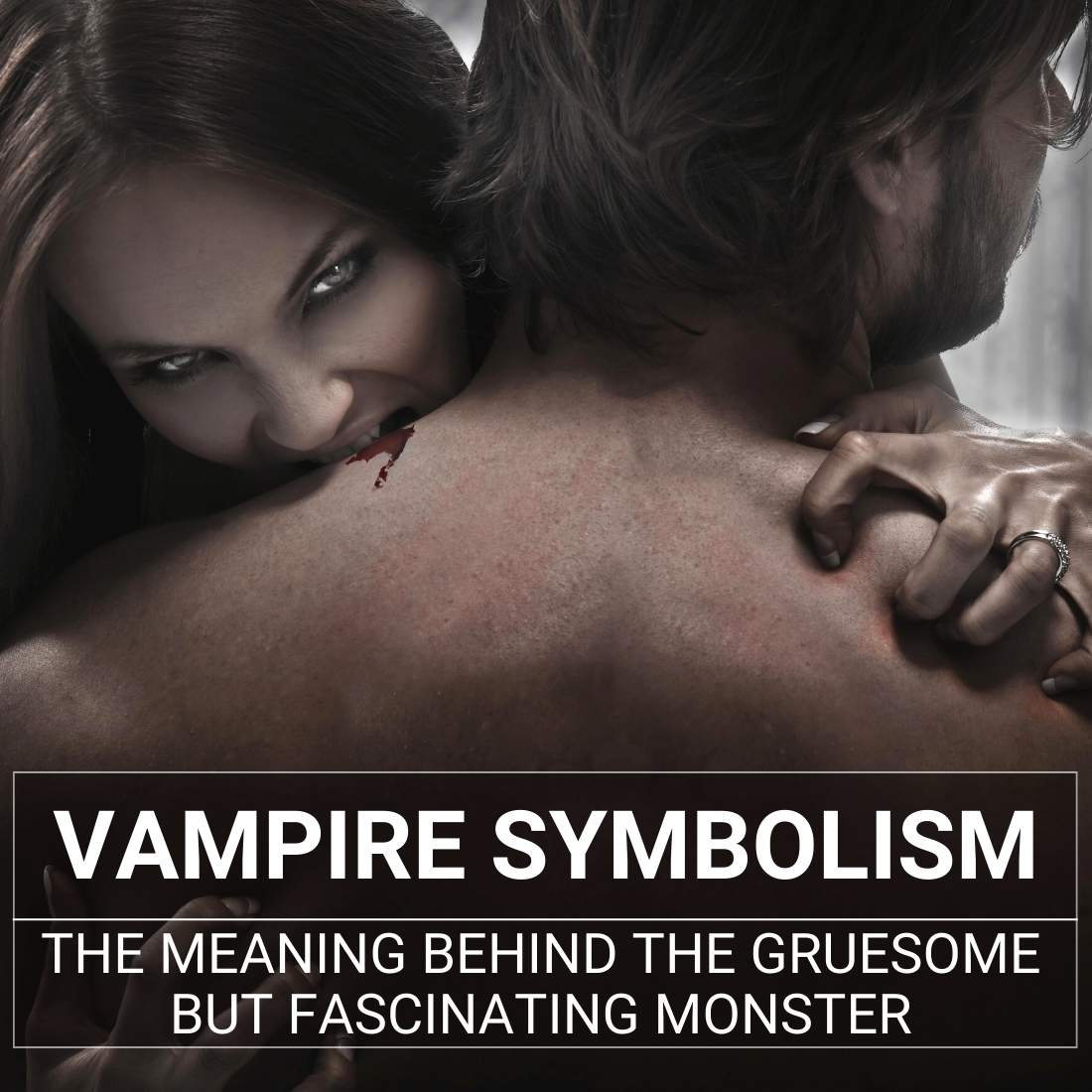 Vampire symbolism has been around for centuries, and its allure has only grown in recent years. Thanks to popular culture, most people now know that vampires are blood-sucking monsters who can turn into bats.

In the modern world, the vampire is for sure one of the most alluring creatures. Vampires are symbols of fear, mystery, disease, and the darker side of humankind. Mysterious, immortal, and transformative, vampires are one of the more infamous creatures of the night. With their bat-like charm, pointy fangs, and thirst for blood, vampires are often as much feared as they are adored.

But what is the real meaning behind these creatures? Why do they fascinate us so much? In this blog post, we will explore the symbolism of vampires and discuss what they represent to us on a psychological level.

“The vampire is an outsider. He’s the perfect metaphor for those things. He’s someone who looks human and sounds human, but is not human, so he’s always on the margins.”

What do vampires symbolize

In television, movies, and literature, vampires are often depicted as horrifying, bloodthirsty beasts. Their image may have originated from certain fears surrounding race, sexuality, and control. Vampires remind us to embrace our differences and the differences of others and not fear our natural instincts and needs as humans.

The mysterious powers and abilities of a vampire are often kept hidden from those who are human. Even a vampire’s identity often remains a mystery. Vampire symbolism teaches us that a person’s identity and true nature are more than skin deep. You may also be someone who doesn’t express themselves outwardly, and a vampire’s presence reminds you to let your true, authentic self shine through.

To become a vampire, one must be bitten by one, which initiates their transformation into a creature of the night. Vampires symbolize a fear of disease, which may stem from a fear of our own immortality. But, the vampire never dies and reminds us that life doesn’t end with death; it only transforms.

The darker side of humankind

When a vampire first turns, they have little control over their natural instincts. These instincts manifest in ways such as drinking the blood of an innocent victim, using their powers for control and deception and giving into their extreme sexual impulses.

Vampires symbolize the darker desires everyone has within themselves and the aspects of our character that we hide from others. They remind us that these desires are natural, but allowing them to control us only creates destruction.

Vampires are immune to aging, suffering, emotions, and pain and have seemingly overcome all of the weaknesses of being human. These ghastly creatures remind you to release resistance against your own weaknesses, allowing you to free yourself from their chains.

What do vampires represent to us?

No matter what they represent to us, it is clear that vampires have deep and powerful symbolism. They, however, could not function the way we do biologically, this article about vampire biology clearly proves that point.

Why are we so fascinated by vampires?

There are many reasons why we are so fascinated by vampires. They are creatures of the night, which taps into our primal fear of the dark. They are also powerful and immortal, which is something that we all long for.

Additionally, they are often seen as sexy and romantic figures, which appeal to our desires. Ultimately, vampires represent many things to us on a psychological level, which is why we find them so fascinating.

The reasons are as diverse and unique to each individual reader. One might find the appeal in its eroticism, while another may be captivated by immortality or powerlessness; some enjoy beauty and elegance from a victimization perspective – but there’s no one answer that can clarify why someone would choose this lifestyle for themselves!

The vampire’s symbolism in different cultures

Vampires have been a part of human culture for centuries, and they have been depicted in many different ways. In some cultures, the vampire symbolism is seen as evil monsters who must be destroyed. In others, they are viewed as sexy and romantic figures. And in some cultures, they are even considered to be gods or demons. No matter how they are viewed, it is clear that vampires have deep and complex symbolism.

In the 18th Century, a mass hysteria involving the presence of vampires exploded throughout the continent. The vampire panic erupted after a ‘vampire attack’ in East Prussia.

An early recorded case of vampirism involves a man named Petar Blagojevic. After being declared dead, he returned home, asking his son for food. He later attacked nine villagers, who recalled him coming into their homes at night. It’s believed that Petar drank both his son and the villagers’ blood before draining them to death.

In Russia, vampires were known to appear as handsome young men who would lure women into their death. They did this by appearing in villages and courting other youthful locals with talk of love interests or parties at night-time; often times these figures would bee stop returning home after sunset without explanation until morning came around again!

In African mythology, there are two known instances of vampires, the Asanbosam and the Sasabonsam.

The Ashanti people of Africa believe in a creature called an Asanbosam. These beings live high up in the trees of forests. An Asanbosam has hooks for feet and uses them to hang from the trees like bats.

They are known for attacking anyone that enters the forest where they reside. Similar to traditional vampires, an Asanbosam bites their prey’s throats with their iron-sharp teeth.

The Sasobonsam also exists within African lore. They are human-bat hybrids, with human faces and long, ominous bat wings. Africans believe they have sharp, powerful teeth that allow them to devour anything that crosses their path. These creatures also live in the trees and drink the blood of human beings.

In the late 18th Century, a vampire tragedy began to spread throughout New England. Similar to the Salem Witch Trials, this vampire frenzy was fueled by fear and paranoia. During this time, tuberculosis had become an epidemic. People believed those that transmitted this disease were infected at night during a visitation from a family member that had previously died from tuberculosis.

To defend themselves against the deceased, many people began removing the hearts of their loved ones who died as a result of this disease. They believed that removing the heart would completely drain them of any life force they had, preventing them from awakening from the dead and infecting other family members. Once the heart was removed, it was often burned to ashes.

To learn more about this phenomenon, check out this video to take a deep dive into America’s vampire panic.

Langsuyars are Malaysia’s vampires, and they have been known to marry in order to keep their bloodthirst at bay. Malaysia has a rich history of spiritual beliefs, and one way they believe pregnant women can become vampires is if their death occurs while or just after giving birth.

Langsuyars often were pictured as beautiful young women who could bear children with them after marriage; though sometimes it is revealed that these creatures never fully shifted into human form – instead remaining something between mannish or feminine depending on what species you ask about!

Lang suffix yar means “forest” so this person lives deep within the woods where no one dare go without an invite from either him/herself (or another langsdyary).

The vampire symbolism in literature

The vampire is a common creature used in literature, particularly horror. The transformative story of the transition from human to vampire is often described in novels, and many vampires have their unique abilities and weaknesses. Vampires suck and they are everywhere: in your TV, in your children’s bedtime reading, and this week in your (possibly) favorite online-only magazine newspaper. Here you can see a quick summary of vampires on screen.

Here are three of the most famous vampire characters of all time.

“A vampire, like a lady, never reveals his true age.”

Bram Stoker’s Dracula is one of literature’s most famous depictions of a vampire. The story follows a lawyer traveling through Eastern Europe. Local villagers warn him about where he’s traveling to and give him charms to ward against evil.

He arrives in Transylvania at the castle of Count Dracula. During his stay, he discovers that Dracula has supernatural powers and is keeping him captive. The story introduces other women like Dracula and ends with a full-fledged vampire hunt.

In the Twilight Series by Stephenie Meyer, the story follows a girl who falls in love with a vampire she meets at school. The girl and the vampire struggle with their relationship due to the differences between her humanity and his immortality. The vampire symbolism in this series is immortal, beautiful, and has extremely heightened senses. Interestingly, unlike some vampire lore, these vampires were able to walk in sunlight unharmed.

Interview with the vampire

In the novel, Interview With the Vampire by Anne Rice, the story follows a man who was turned into a vampire against his will. He meets a young child who he eventually turns into a vampire as well. The two vampires travel throughout Europe and discover a society made of other vampires. Although they are amongst their own people now, they unknowingly enter a new realm of unimaginable danger.

A big list of vampires in fiction and folklore

If you’re still thirsty for knowledge, check out this rather long list of vampires, including their:

What do Vampires in dreams mean?

The vampire symbolism in dreams may represent a circumstance, somebody, or relationship that is draining your vitality because vampires must consume the life force of others to survive. Due to the widespread modern connection of the vampire with love, a dream vampire may particularly symbolize a depleting personal relationship.

The vampire in dreams may also be a metaphor for addiction, such as drugs or alcohol. If you are the Vampire in your dream it could symbolize feeling disconnected from humanity or feeling like a predator who needs to feed off the energy of others to survive.

The apparent desire for immortality can be represented by an apparition of vampires in dreams. One could consider these smart beings with centuries’ worth of knowledge because they are creatures who don’t age and always remain beautiful, intelligent individuals throughout their long lives (even though it may seem otherwise). This would also mean that if you have a vampire lover then your wish might just come true!

Some strange people also talk about spiritual vampires. They drain your energy rather than your blood, unlike the vampires in novels and movies. These assaults are frequent occurrences that are quite genuine. The majority of us go through life unaware that our spiritual and physical vitality is being depleted.

Horrific and chilling, the vampire symbolism has been a representation of fear throughout many parts of the world. Their image is still one of the most popular caricatures used in modern entertainment. Vampires are infamous symbols of fear, death, and mystery, but these creatures’ stories remind us of the impulses, secrecy, and natural instincts that exist within us.