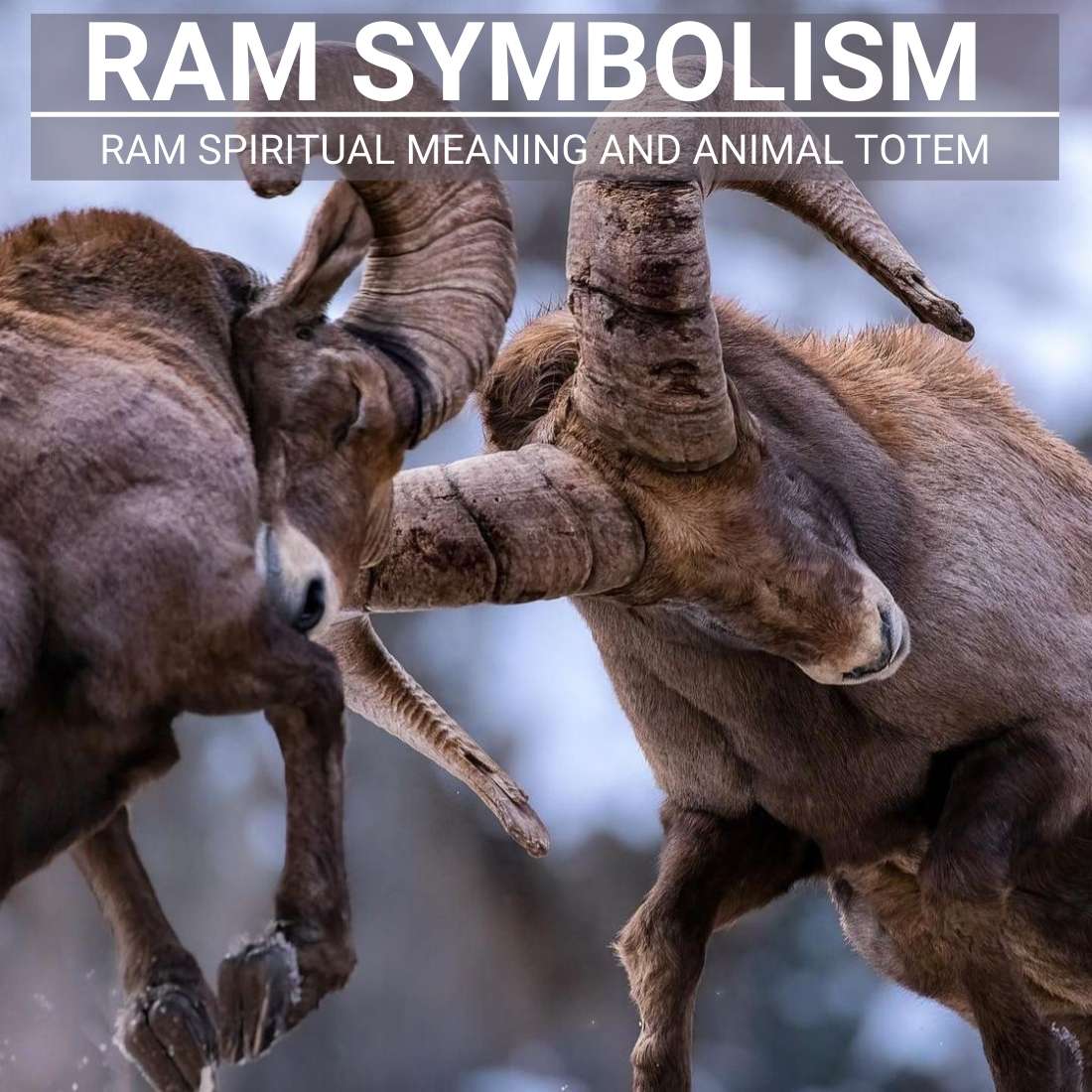 Ram Symbolism: A Spirit Animal That Teaches Us To Face Our Challenges Head-On

Admired for its massive spiral horns, the ram commands a powerful image that goes along well with its amazing vigor and imposing frame. Considered among one of the toughest animals in the wild, they have long been acknowledged in various traditions as a creature that symbolize great fortitude and courage. While these high-spirited animals may not be as ferocious and effective hunters much like lions and tigers, their domineering abilities and competence make them a dynamic spirit animals to have. Dynamic and perky yet reclusive and at times aggressive, let’s strike head-on the ram symbolism and find out what it means when they thrust themselves into our lives.

In order to be an immaculate member of a flock of sheep, one must above all be a sheep oneself.

The ram is one of the most fascinating animals in the world. It has a long history and a rich symbolism that spans many cultures. The ram is associated with many spiritual meanings, and it is considered a powerful totem animal. In this blog post, we will explore the symbolism and spiritual meaning of the ram, as well as its animal totem significance.

What does a ram symbolize?

Highly revered as one of those rare creatures that even the most terrifying of beasts would not deal with, rams are easily seen by many as a symbol of grit, determination, and fearlessness. Capable of fighting off a host of big game predators, it inspires us to stand firm and tall in the face of life’s most challenging situations. An animal that can’t be counted as a prey nor a predator, here are a few of the messages that the ram symbolism offers.

An enhanced presence of mind

Naturally watchful and observant, rams, much like most animals, strive hard to keep themselves aware of their environment. While these generally feisty creatures would not back down from a fight, their presence teaches us why thinking about the consequences of our actions is important for it may unwittingly affect others. It also reminds us that while our strength may be enough to ward off potential threats, using our intuition and the ability to recognize risks make us a more difficult target to hit.

Observed to chase away predators by putting down their heads or angrily stomping their feet, the ram runs into our presence to bring a message of security, protection, and guidance. By giving us the capacity to discern and predict the motives and actions of the people around us, our strength and wisdom are often overbearing enough to keep the people most dear to use safe and free from harm.

Gifted with an impressive horn that adds to their dominant appearance and captivating grace, rams are amazing animals that time and again prove how they are more than just a pretty face. While they often use these features to land a date with a potential mate, their defensive benefits include deterring a hungry threat or pushing a similarly courageous and stubborn adversary away. They would often strut into our presence to remind us that while beauty is, at times, associated with things graceful and delicate, we can use it as our source of great strength.

Perhaps rightfully acquiring its name from the way it charges into its enemies, the ram’s image reminds us of our capacity to lead and be more assertive. While it is strong enough to fight off the most frightening of predators, this naturally feisty animal does not walk around claiming dominance over others but, instead, gently takes only what they need and deserve.

As its imposing presence shows its excellent strength, courage, and confidence, rams would often appear to us bearing a host of awesome spiritual messages. By wielding their enormous horns and showing off their somewhat muscular frame, it’s easy to understand why these sturdy creatures are a popular symbol of power and vigor. Making its presence felt at a time of weakness and doubt, it serves as our motivation to face and charge such challenging situations head-on. Using the incredible instincts that they have to determine the existence of danger, they provide us with the inner strength to overcome the challenges that lurk.

An image of strong influence and authority, the ram indicates our capacity to lead and assert ourselves as we journey towards the realization of our dreams. With a distinct feature that allows it to stand out from the rest, it tells us that while each of us possesses a beauty that is unique from that of the others, finding ways to use our gifts in the service of our peers is undeniably noble than using it to gain personal benefits. Built with features that provide it with a relatively assertive physique, a visit from this strong-willed creature signifies the importance of ramming through our weaknesses and showing why we are worthy of respect and reverence.

Sporting a pair of magnificent-looking horns, it doesn’t come as a surprise that it represents a powerful meaning if you have the ram as your animal totem. Majestically located on its head, this striking feature awakens our capacity to tap into our intelligence and wisdom when the situation requires it. While it doesn’t mean that you should constantly stimulate your mind, these highly intelligent creatures urge you to learn continuously as it promotes both mental and spiritual growth. Not only does an aroused and motivated mind provide you with the determination to be of service to others, but it also encourages you to accomplish the most remarkable feats.

Widely respected as an unyielding animal that doesn’t go around looking for but would never back down from a fight, this headstrong totem animal represents how we are capable enough to defend ourselves and keep our loved ones safe. Its uncompromising nature indicates how our determination can fuel our senses to relentlessly use our skills and talents to ultimately gain success. Since the ram is instinctively analytical and curious, this totem stirs us to enlighten our minds to easily acknowledge new ideas and to open our hearts as we embrace the changes that go along with such understanding and acceptance.

The ram symbolism in different cultures

In ancient Egypt, the ram was considered one of the most revered animals. Worshipped as a deity, it was associated with Amun, the God of fertility and creativity. It was also believed to have been responsible for the annual flooding of the Nile which served as a vital source of water and agricultural fertility.

In Greece, this mighty creature was known for being able to butt its head against rocks and break them into pieces. This earned it a place in their mythology as the animal that helped Zeus escape from his father Cronus by breaking open the cave that he was imprisoned in.

In Christianity, rams were known to represent Christ as the Agnus Dei. It was also believed to be a sign of promise and abundance, which is why it became a popular sacrificial animal during the Old Testament era.

In Native American culture, they are a powerful symbol of masculine energy and virility. They are also associated with bravery, strength, and courage as they are known to be one of the most fearless animals in the wild.

What is the meaning of dreaming of a ram?

When a ram appears in your dreams, it is often a symbol of strength, determination, and power. The ram may also represent new beginnings, fertility, and virility. If you are facing a difficult situation in your life, the appearance of a ram in your dream may be a sign that you need to tap into your inner strength and power to overcome the challenges you are facing.

The ram is a strong and powerful animal. Its need for perseverance makes it perfect as an image of how we must push ourselves when faced with obstacles in our path, or even just simple duty that requires pushing on through until completion no matter what happens along the way! If you dream about seeing this creature then there may be something important happening around them – like Fire- associated transformation going down currently which will make things happen faster than expected.

The ram is a masculine symbol associated with strength and power. If you dream about this fantastic animal, it might indicate the refusal to obey or your desire to rule in some way! The ram is a sexually-forward animal that thrives on promiscuity. Associated with fertility, the spotty complexion of your dream could represent the natural sexual drive and desires within every person to have children or engage in penetrative intercourse at least once before they die!

While the ram is held by many as an image of protection, courage, and humility, their firmness in keeping much larger and more fearsome predators at the bay show just how much we can use our physical and intellectual gifts to make an impact on others. Although these bold and fearless spirit animals are in no way near possessing the ravenous nature of a true-blue predator, the prominence of the ram symbolism makes them a creature you wouldn’t want to mess with.