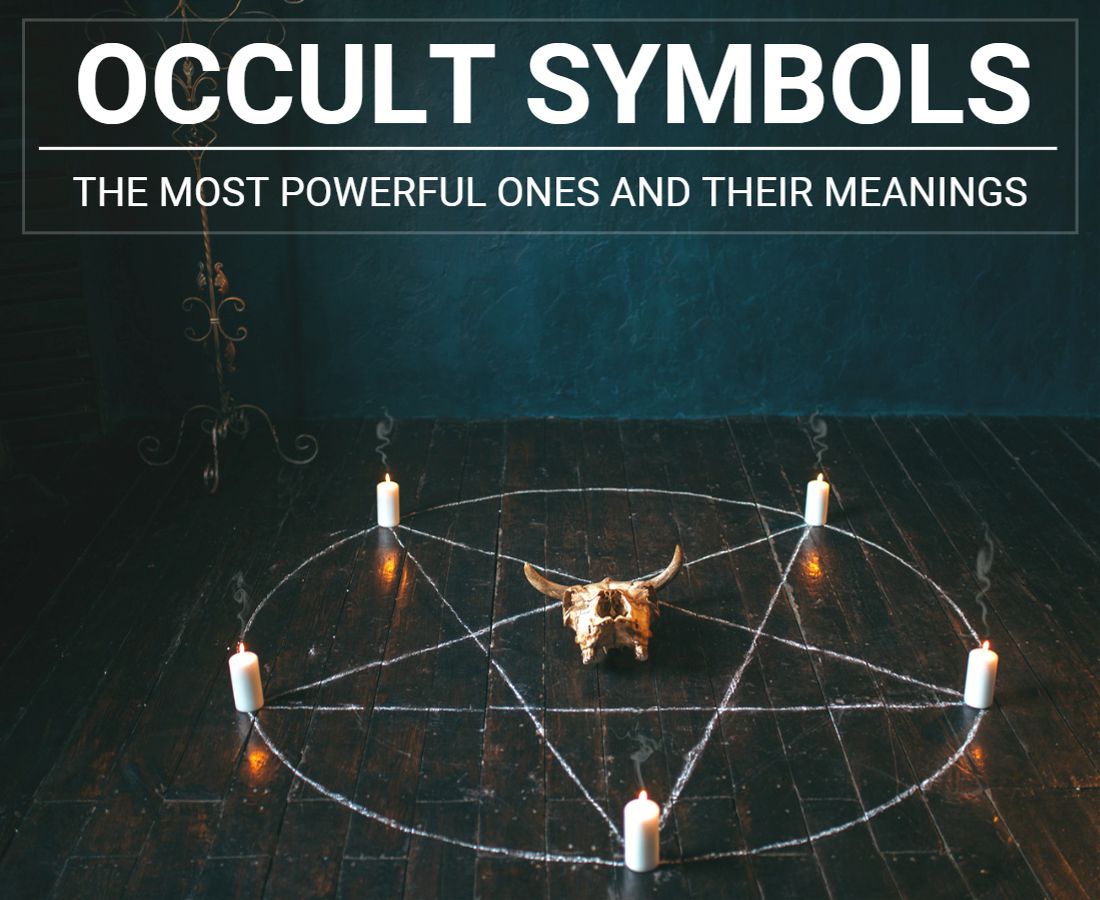 Certain symbols are considered occult because they are associated with supernatural or magical powers. Some people believe that occult symbols can tap into hidden knowledge or power and can be used for good or evil purposes.

Occult symbols are often seen as mysterious and intriguing, and they can be found in many different contexts, including art, literature, music, and film. In this article, you’ll find a few top occult symbols and their meanings.

“Followers of the occult believe in only what they already know, and in those things that confirm what they have already learned.”

The word occult has many different meanings and can be used in many different contexts. Generally, the word refers to something that is hidden or mysterious and often has a religious or supernatural connotation.

The occult can be used to describe anything that is hidden from view or not easily understood. This could include things like secret societies or knowledge that is only accessible to a select few.

Often, the occult is associated with things like magic, witchcraft, and the supernatural. This is because these things are often seen as being beyond the realm of normal human understanding.

While the word occult has a negative connotation for some people, others see it as a positive thing. For example, some people believe that studying the occult can help them better understand the world and their place in it.

Others simply find it fascinating and enjoy exploring its mysteries.

Occult symbols are often associated with evil and darkness, but this is not always the case. While some symbols may be used in dark rituals or by evil people, many others are simply used to represent spiritual concepts or ideas.

There is no single meaning for all occult symbols, and different people may interpret them in different ways. Some occult symbols have been used for centuries, while others are relatively new.

The pentagram, for example, is a very old symbol that many different cultures and religions have used. It can represent the five elements (earth, air, fire, water, and spirit), the five points of the human body (head, arms, and legs), or the five senses (sight, hearing, smell, taste, and touch).

The inverted pentagram is often seen as a symbol of evil because it can represent the dark forces of nature.

How these symbols are used and in which groups is how they gain their power, purpose, and meaning.

Occult symbols can be found in a variety of places. They are often used in tattoos, body art, and jewelry. Some people believe that these symbols have magical powers and can protect them from harm.

Others simply think they look cool! Whatever the reason behind their use, occult symbols are definitely fascinating.

“The occult – what do you mean, Jesus? That’s occult to me. It’s so far-fetched, it’s ridiculous.”

The pentagram is a five-pointed star that has been used as a symbol by many different cultures and religions throughout history. It is most commonly associated with the occult and witchcraft, but its true meaning is much more complex.

The pentagram has been used as a symbol of protection and power since ancient times. In Greece, it was associated with the goddess Athena and was believed to bring good luck.

In Babylonia, it was known as the “Star of Ishtar” and was used to ward off evil spirits. The early Christians also used the pentagram as a symbol of their faith.

The pentagram’s association with the occult began in the Middle Ages when it was often used in magical texts and charms. Pagans, Wiccans, and witches use the power of nature in their spellwork, which is why this symbol is heavily used in these belief systems.

The Seal of Solomon

The Seal of Solomon, also known as the Ring of Solomon, is a magical signet ring that King Solomon of Israel supposedly possessed. The seal was said to give Solomon power over demons and other supernatural beings. It also allowed him to communicate with animals.

The earliest references to the seal come from Arabic and Ethiopian sources. The seal was also mentioned in the Talmud, a collection of Jewish religious texts.

The meaning of the Seal of Solomon has been much debated over the centuries. Some say it is a symbol of wisdom and power, while others believe it is an evil talisman that brings misfortune to those who possess it. Tarot cards are a type of playing card that originated in Italy in the 15th century. They were originally used for games, but they soon became associated with the Occult.

“The occult powers may be possessed by soul, but if they are not used in the right way it is a loss rather than a gain.”

The is often used for divination or the art of predicting future events. A person who reads cards is called a reader. readings can be done for yourself or for another person.

Some believe that the symbols on the cards have a deep, hidden meaning. Others simply see them as a fun way to tell a story. Either way, cards are definitely one of the most popular occult symbols around.

By the way and if you’re interested we’ve got 5 minutes free of card reading for you – check below!

Choose the tarot reading psychic that best suits you & get 5 min FREE for the 1st session!

Tested and experienced psychic advisors are waiting to give their insight, day or night. The word “sigil” originates from the word “sigillum,” which means “seal.” A sigil is a symbol that is used as a magical tool.

It is usually a pictorial representation of the goal or intent of the person using it. Occultists have used sigils to help manifest their desires.

When you create or use a sigil, you are tapping into your own personal power to make changes in your life.

The black sun is a symbol with a long and varied history.

In modern times, other groups have used the symbol for their own purposes and have no association with nazism. Today, it is most commonly associated with the occult and Satanism.

The black sun is often seen as a symbol of evil and darkness. It can also be seen as a representation of death and destruction.

Kabbalah is an ancient form of Jewish mysticism that teaches about the nature of God and the universe. The Kabbalah tree of life symbol is a powerful tool for understanding the mystical teachings of this belief system.

The tree of life symbolizes the different levels of creation, from the most basic level of matter to the highest level of spirit. Each level is represented by a different Sephirah, or sphere, on the tree.

The different Sephiroth are connected by 22 paths, representing the different ways energy can flow between them. The Kabbalah tree of life can be used as a map for exploring the different levels of reality and understanding how they are all interconnected.

It is also a powerful meditation and contemplation tool, helping us connect with our divine nature. Read our article if you’re interested in meditation for achieving an altered state of consciousness.

“There was a time when people accepted magical experiences as natural. There were no priests then, and no one went chasing after the secrets of the occult.”

An Ouroboros is a symbol of a snake, and sometimes a dragon, eating its own tail. The symbol originated in Ancient Egypt and was later adopted by mystics.

The Ouroboros represents the cyclical nature of life, death, and rebirth. It is often used as a symbol of eternal life or infinity.

Some believe it’s a representation of self-preservation and the process of cultivating spiritual energy to reach enlightenment.

The Udjat, also known as the Eye of Horus or the Eye of Ra, is an ancient Egyptian symbol of protection and power. The eye is usually depicted as a human eye with the sun disk in the center.

The Udjat was believed to have magical healing properties and was often used as a talisman to ward off evil spirits. It was also thought to provide protection against the evil eye, which was said to be able to cause illness or misfortune.

The Udjat is still used today as a symbol of protection. It can be found on amulets, jewelry, and even in tattoos. The Cross is perhaps the most well-known religious symbol in the world. It is a symbol of Christianity, but it has also been used by other religions such as Islam and Hinduism.

The Cross represents the crucifixion of Jesus Christ and is seen as a symbol of his sacrifice. It is also a symbol of hope, resurrection, and new life.

Today, the Cross is still used as a religious symbol by Christians and others. It is also seen as a symbol of peace and tolerance.

The classic cross is among the most widely used protective symbols in the world
Classic Cross Necklace
$28.50

The All Seeing Eye is said to represent the eye of God or the Universal Mind. It is a symbol of omniscience and spiritual insight.

Others believe that it is a sign of guidance and support, showing us that we are never really alone.

“All forms of yoga involve occult assumptions, even hatha yoga, which is often presented as a merely physical discipline.”

In Chaos Magick, the symbol of chaos is used to represent the chaotic and unordered nature of reality. This symbol is often used in rituals and spells to bring about change or chaos in a person’s life.

This belief is based on the idea that the universe is constantly changing and that there is no one right way to view reality. This makes Chaos Magick a very flexible and adaptable form of magic.

A philosopher’s stone is a symbol of transformation. It is said to be able to turn base metals into gold and to create an elixir of life that can grant immortality.

The stone is also a symbol of wisdom and understanding. The philosopher’s stone has been associated with alchemy and magic since ancient times.

It is said to be the key to the secrets of the universe. Many famous alchemists, such as Isaac Newton and Nicolas Flamel, sought after the stone in hopes of finding its power.

Today, the philosopher’s stone is still used as a symbol of metamorphosis and enlightenment. It reminds us that there is more to life than what meets the eye and that we can all achieve our highest potential if we open our minds to new possibilities.

For more information on occult symbols, check out this video!