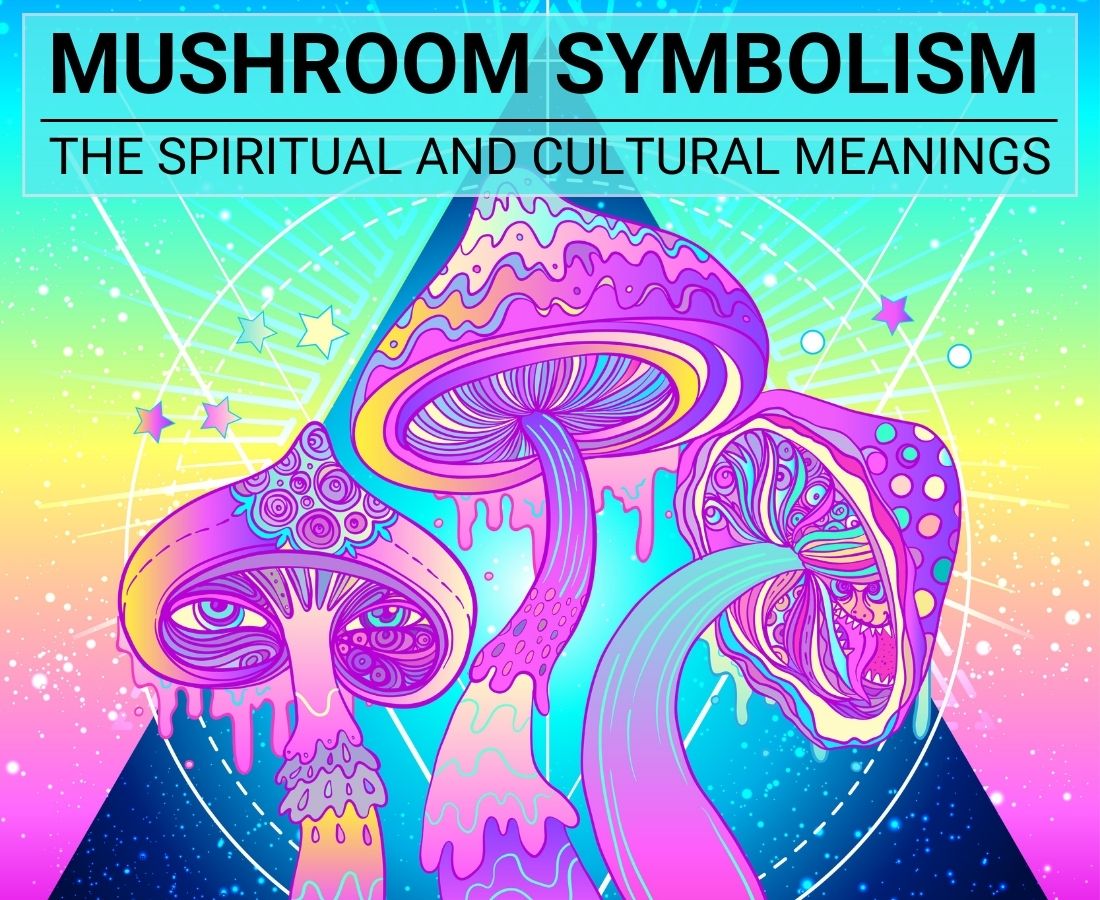 Did you know some mushrooms have the ability to stay dormant for decades at a time? Mushrooms are fungi and contain many unique qualities that other plant-like materials don’t possess.

Mushrooms have played an important role in many cultures and societies, used for both food and medicinal purposes. They are a source of both culinary and spiritual fascination.

Though they often grow in dark, dank places, mushrooms are some of the most delicate and beautiful creatures on earth. Continue reading for a deep dive into mushroom symbolism and its cultural impact.

“A meal without mushrooms is like a day without rain.”

The spiritual symbolism of mushrooms

Mushrooms are one of nature’s most fascinating organisms for symbolism. They symbolize finding the light in the darkness, higher perspective, and purification.

Mushrooms are symbols of transformation and change

This is because they often appear suddenly after a rain and because they grow and change so rapidly. Mushroom symbolism can also be seen in the way that some mushrooms are used in traditional medicine. For example, the fly agaric mushroom is used as a psychedelic drug in some shamanic traditions.

Mushrooms have been associated with death and decay

This is because they often grow in places where there has been death or decay, such as in forests after a fire. Mushroom symbolism can also be seen in the way that mushrooms are often used in funeral rites and ceremonies.

Mushrooms are also symbols of fertility and abundance

This is because they often fruit in great numbers and because they are often found in places where there is plenty of food. Mushroom symbolism can also be seen in the way that mushrooms are often used in fertility rites and ceremonies.

“Falling in love is like eating mushrooms, you never know if it’s the real thing until it’s too late.”

Some varieties of mushrooms have the ability to glow in the dark. The ability comes from a chemical reaction from an enzyme these mushrooms contain when they are exposed to oxygen.

Mushrooms symbolize the ability to find a positive light in dark times. They hold the power of illumination and the strength to hang on to a bright perspective even when the outside world tells you otherwise.

Mushrooms have been medicinal for their healing properties and their connection to spirituality. Certain mushrooms contain chemicals that produce a spiritual and psychedelic trip used to open one’s mind.

These organisms symbolize the connection to the universe found within your mind. If you’re struggling to find answers or unable to wrap your mind around a situation, you may start seeing mushrooms around to remind you to look inside yourself to find a higher perspective.

Scientists have proven that some mushrooms can digest plastics; through their experiments, they saw over 50 varieties of these fungi could effectively consume small bits of plastic and survive.

Mushrooms are a symbol of purification due to their ability to potentially rid plastics from the earth. If you find mushrooms growing in your yard, or if they appear continuously in your life, you may benefit from cleaning up some area in your life.

Mushrooms are often food that some people are repulsed by. While similar to plants, their unique qualities seem off-putting to many people.

Mushrooms are a sign of resistance. You may see them appear throughout your life if you cannot relinquish a sense of resistance within yourself.

If this resonates, reflect on your life to identify why the mushroom may be asking you to let go of this energy. When you become freer, you stop empowering the person, place, or thing you are running away from.

Mushrooms come in a wide variety and have been used in very interesting ways throughout history.

The followers of the druid religion were believed to have used mushrooms in their ceremonial practices. These mushrooms were the medicinal variety used for their hallucinogenic properties.

The drugs likely used the fungus for their spiritual advancement and to strengthen their connection to God. These mushrooms were called “flesh of God,” meaning they believed consuming them meant physically embodying God.

Ancient Irish folks believed that during the time around Halloween, the veil between life and death became thin enough to communicate with evil spirits. It’s also known that hallucinogenic mushrooms were also in season during this time period.

The evil spirits may have been a hallucination perceived by these people under the influence. Fairies were also a common spirit to be seen during the time of Halloween in Ireland.

Scholars also believe that a single religion, founded on the use of magic mushrooms, was created in Ireland. Their beliefs were abstract, psychedelic, and likely a reflection of using this fungus.

Some even believe that the religion was the origin of many pagan religions throughout Ireland during that time.

“Life is too short to stuff a mushroom.”

In Great Britain, fairy folklore was popular in the old times. Sometimes mushrooms appear to grow in circles, which the people of Britain believed contained magical properties.

These structures were called fairy rings. Fairies would supposedly come and dance inside these circles, especially after rainfall.

Mushroom rings weren’t always considered a sign of fairies. People of Holland once believed that these rings were left by the devil during his travels throughout the night. Other areas of Europe also depict the rings as markings of dark magic.

The Fly Agaric mushroom was one of the most common mushrooms used in fairytales. They are depicted alongside fairies and gnomes.

These mushrooms were hallucinogenic and were likely consumed by men before battle due to their chemical composition that reduced feelings of fear.

The use of fungus-based imagery in the arts may be an allusion to the religious practice known as “shamanism,” which was popular among some cultures throughout history. In particular are paintings by Hieronymus Bosch and other Netherlands painters during this time period who utilized psychoactive mushrooms for inspiration while creating their work—an indication that they themselves were not entirely aware of how closely tied these two themes truly was.

In ancient Egypt, mushrooms were a sacred food that only royal people were able to consume. Because of their rarity, it was tough for common people to find or afford them.

The fungus was also found throughout ancient hieroglyphs in the pyramids showing that mushrooms have been eaten for thousands of years. They were believed to have properties of immortality and medicinal properties.

The Mayan people had a deep connection with mushrooms. They used them for both food and medicine, as well as in their religion, where they were used to communicate with the gods through trances or hallucinations that can signify something important has been revealed about yourself when you consume these fungi.

Mushroom stones found throughout Mexico show human faces displaying expressions ranging from happiness all way up to blissful states which may hint at how different cultures saw trips into altered reality during ancient times.

The magic mushroom is a term used to describe a wide variety of mushrooms that contain psychoactive compounds. These mushrooms can induce hallucinations, out-of-body experiences, and altered states of consciousness. Magic mushrooms have been used for centuries in religious and spiritual ceremonies.

If you’re interested in meditation, manifestation, psychology, altered states of consciousness, and pushing the boundaries of your reality, then the Silva Ultramind System is your key to unlocking the hidden potential of your mind.

With over 6 million students in 110 countries, The Silva Method is a tried and true formula for success. This powerful system is based on the teachings of Texan radio engineer Jose Silva, who developed the method in 1960.

I took the course myself and wrote a review about it, you can find it below. For the individual in search of activating their mind's full potential...

They are seen as a connection to the spirit world and a source of wisdom and knowledge. Mushroom symbolism is complex and varied, and mushrooms continue to fascinate us with their beauty, mystery, and power.

In recent years, magic mushrooms have gained popularity as recreational drugs. However, there is a growing movement of people who are using magic mushrooms for therapeutic and spiritual purposes. Some people believe that magic mushrooms can help to heal trauma, ease anxiety, and promote creativity. We have another little post about magic mushrooms.

Why do you keep seeing mushrooms?

As shown above, mushrooms have many spiritual meanings that may account for why you see these little organisms popping up in your life. You may see mushrooms to remind you to live in the moment and follow your joy.

When mushrooms were taken for their hallucinogenic properties, they allowed people to live in the present and experience high states of ecstasy. While it’s not safe to eat a mushroom you find in the wild, they can inspire you to cultivate smaller versions of these states within your own life.

Mushrooms may also appear in your yard or around your home if you would benefit from working on your communication skills. Fungi operate on an electrical network in the ground that allows them to communicate with each other.

The network also allows trees to communicate with one another. If you’re struggling to communicate your thoughts or feelings, find ways to express yourself in a healthy way.

You can’t eat every mushroom you find in the wild. Some are edible and delicious, while others are poisonous and deadly. If you’re finding mushrooms around your home, it may be a sign to be cautious when moving forward in some area of your life. Any decision you make is vital, as one may lead to success and the other to failure.

Lastly, mushrooms contain medicinal properties that can help benefit the brain and immune health. If you see them sprout in your daily life, you may be called to better care of your health. You may even benefit from adding some mushrooms to your diet.