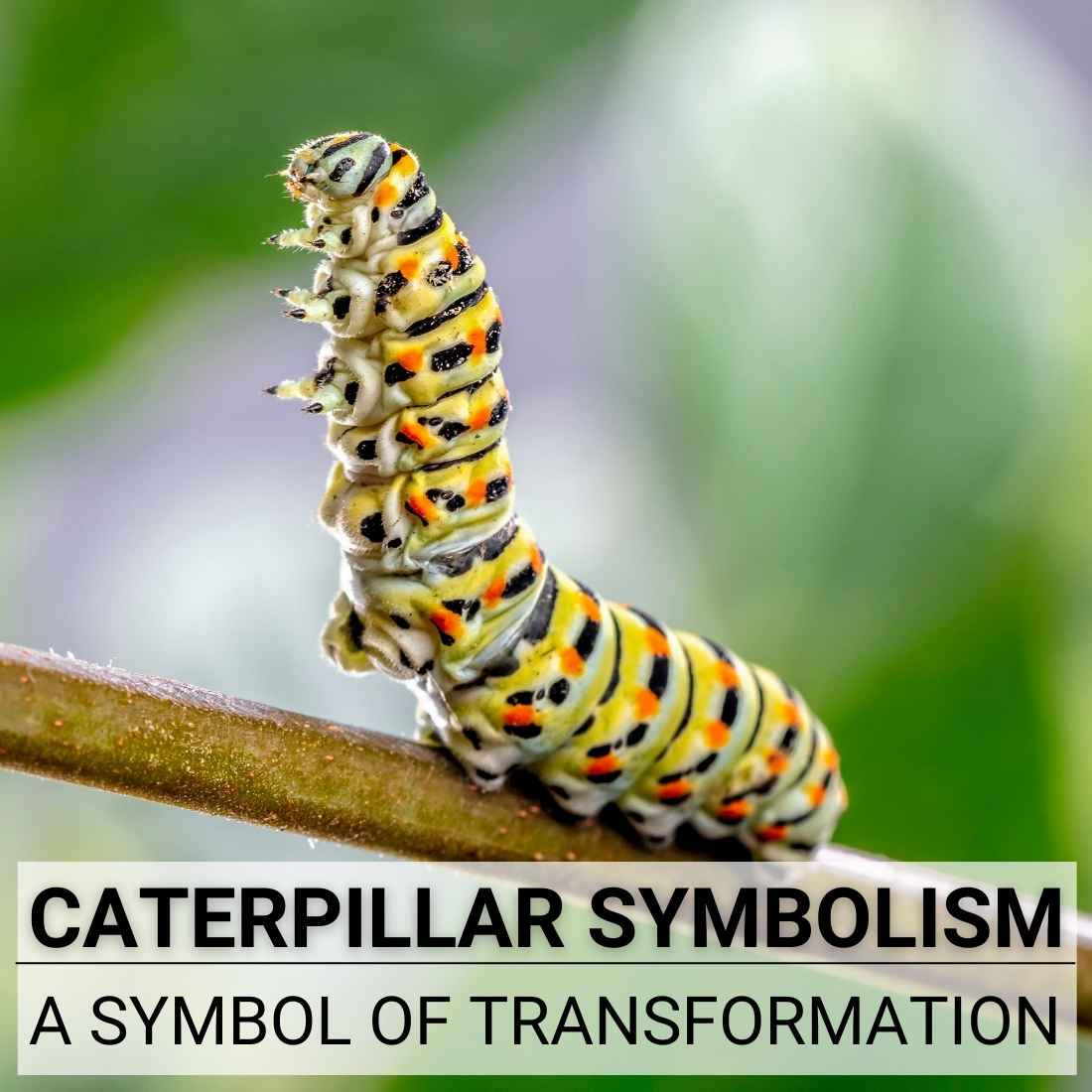 A caterpillar is a symbol of transformation. It goes from a caterpillar to a butterfly, and people believe that it represents the process of change in life. Caterpillar symbolism can have different meanings depending on your beliefs. Some caterpillars represent death and rebirth, while others represent being stuck in an old self or way of thinking that needs to be shed before you can move forward with your life. In this blog post, we will explore caterpillar symbolism and what it means for you!

Caterpillar symbolism can be found throughout history and in different texts combined with various elements of symbolism. It’s not uncommon to find caterpillar imagery associated with themes such as transformation, rebirth, or resurrection.

Because of their close association with butterflies, people consider these insects as change agents capable of transforming into something better than what they were before (a metamorphosis).

Anthropomorphizing this particular insect is quite popular, too; there are plenty of cartoons depicting caterpillars that look like humans or have human-like feelings, thoughts, and emotions. These cartoon caterpillars (and butterflies) can wear clothes, play various instruments, and even drive cars.

Caterpillar symbolism has some negative connotations too. In western cultures, caterpillars are seen as pests who eat plants and destroy gardens.

What does a Caterpillar symbolize?

The Caterpillar is a fun and fascinating insect. Have you ever noticed the concentric circles on the back of an adult caterpillar? The tiny hairs that cover these caterpillars are movable, which allows them to feel things that touch them (such as your finger). If you rub or stroke its back, it will close up like a drawstring bag.

Caterpillars may seem innocent enough, but they are voracious feeders. They can eat entire leaves in one sitting; if not careful, they could destroy trees by eating their leaves!

The symbolism of butterflies and moth has been with us for thousands of years across many cultures. It was considered a symbol of rebirth in ancient Egypt, while it symbolized the soul for other ancient civilizations.

The transformation of Caterpillar into Butterflies is one of the most profound examples of metamorphosis.

The caterpillar transforms into a beautiful butterfly during this process. As a result of this transformation, many changes have occurred, not just physically but also emotionally and mentally. If you are going through a significant change or upheaval in your life, seeing the butterfly transform can be helpful and inspiring.

When you are going through changes in your life, having something to look forward to can make all the difference.

Seeing a butterfly emerging from its cocoon or chrysalis is an inspiring sight. Sometimes called ‘the beauty of struggle,’ there are times where we must struggle with specific issues before achieving what we want out of life.

There are many aspects of this symbolism, but when you know there is something great on the horizon, it makes it easier to get through the tough times.

The butterfly represents spiritual transformation and transmutation, which can mean evolution or change. Butterflies are beautiful with their wings spread wide open.

They represent our journey towards enlightenment and finding ourselves in life. Butterflies help us open up to greater possibilities in life by healing our emotions and grief to learn about who we are.

In some cultures, the butterfly symbolizes resurrection because it has an interesting life cycle. Depending on what time of year it is, a caterpillar goes from being barely visible as a tiny white worm to being completely unrecognizable as a member of its former species by winter. The only thing remaining from its previous incarnation is a brown-colored casing tightly wrapped around itself in a cocoon. When spring’s warmth returns, so does the new life waiting inside. It peeks out first as a yellow coloring on its new wings before they become visible as a whole new creature.

The caterpillar totem enters your life when you are feeling the pressure of rushing things. The hurry-up syndrome is ruining everything for those who suffer from it, but don’t worry! The wise insect goddess has come to teach them patience and an even pace with which they can tackle any challenge that comes their way.

A caterpillar totem may be trying to tell you that your mindset needs some serious tweaking – it’s time for a personal change! Are you finding yourself stuck in the mud? It might be too late now to try walking on eggshells around those who are causing trouble. Time has come to show everyone what they’re dealing with: will it be an ugly caterpillar or a beautiful butterfly?

It would be wise to take some time out for introspection. Do you really need all this drama around you? The caterpillar can help with that!

The caterpillar totem is a sign that you are entering a time of introspection filled with hard work that requires change before any progress can occur. You might also find yourself struggling against your own negative emotions as they hold you back from reaching your goals.

People with the caterpillar totem are unusual people; they can be strange and philosophical at times. They love leading a simple life and feeling free to do whatever they want whenever they like because their lifestyle depends on it, but find it difficult doing this due to commitments and responsibilities related to work, family, and friends which sometimes restrict them from doing exactly what they want.

A Caterpillar Power Animal can teach us many things – to see what’s hidden, to grow and to overcome challenges. They can help us find our spiritual power and move it into manifestation. They prepare the way for transformation by going through a difficult growth process in their life cycle but emerge from that process beautifully and strongly. They become a butterfly – truly beautiful creatures full of color and grace.

Their caterpillar power animal meaning teaches us that every experience in life has the potential to teach and strengthen us. No matter how difficult or painful it may be, if we persevere through obstacles with determination, we will come out of them stronger for having experienced them.

Caterpillar Dream Symbolism is deep, symbolic, and thick with meaning. From the transition from egg to larva, among all things beautiful (caterpillars can be quite stunning in their markings), this life cycle represents the chrysalis stage where change happens inside out before becoming reborn as something new on the outside – usually into something far more magnificent than it’s previous incarnation.

Caterpillar Dream Symbolism is a message from your subconscious to take control of the caterpillars in your life. Do you have any specific issues that are bothering you? The caterpillar wants to help you resolve those problems and move forward with your life as strong as it was before entering this difficult time period.

People who dream about caterpillars, or find themselves being chased by one, may be experiencing feelings of insecurity right now – they’re afraid something bad might happen if they don’t watch out! Caterpillar symbolism can also mean that these people need to stop worrying so much about what others think; their negative attitude towards personal change will bring them nothing positive at all!

A caterpillar crawling on someone’s face during sleep is a powerful dream symbol that represents the need to get rid of old habits, thoughts, and feelings. It’s not easy to caterpillar symbolism change but it is necessary for your wellbeing!

If you dream of a caterpillar cocoon, then it is time for self-reflection. These dreams signify the transformation from an innocent young person into an intelligent and cunning one who knows how to survive in this world without compromising their morals or principles.

A simple way of interpreting such visions would be if we look closely – what do they tell us about ourselves? What does dreaming make clear when everything else seems unclear? A butterfly emerging out its chrysalis says something profound: either your spirit has been reborn after years spent feeling trapped inside yourself (which might mean there’s some work left ahead), or maybe all change occurs because deep down within remains untouched by outer circumstances despite external forces of life which push and pull us in all sorts of directions.

In a nutshell, caterpillar symbolism tells you to trust the process! What caterpillars may want from your subconscious mind is to reveal new paths for growth – their kind will always emerge stronger than they once were and if we pay attention close enough, caterpillar dreams can give us important advice about how our lives should be enriched with this powerful little creature’s abiding wisdom.

In ancient Greece, there was a myth about how caterpillars came into existence. In this story, Zeus became angry at his wife Hera for being unfaithful while he was away for ten months of each year on Mount Olympus where all Gods were supposed to stay. As punishment for her infidelity, she would turn into a small snake every winter when temperatures dropped and transform back into human form during summertime heatwave conditions once again only by eating a certain flower. This process was repeated each year for many years until the caterpillar could transform into a butterfly and live forever in its new form.

In Christian culture, the caterpillar meaning is associated with death and rebirth. In early Christian art, caterpillars were used to symbolize death because of the way they devour their host’s leaves in order to grow into a beautiful butterfly at its end.

In Egyptian culture, it was considered a symbol of resurrection from the dead by linking the caterpillar life cycle with that of Osiris who had been killed and torn apart by his brother Seth before he could be reborn as ruler over all Egypt. He too transformed from a caterpillar-like state when Isis found him broken up into pieces strewn across the Nile Delta near Lake Manzala which would become known as The Faiyum Oasis where she reassembled him so that he may impregnate her once again and then fly away as a caterpillar.

In Greek mythology, caterpillars were associated with the god Dionysus who would turn into a golden butterfly after he died and was resurrected by his mother Semele so that they could be together for all eternity in Elysium as ruler of the afterlife. The caterpillar symbolism also represents transformation and rebirth to Native Americans because it goes through multiple stages before becoming an adult. For them, this is symbolic of how we must go through many challenges during our life until we reach enlightenment at the end which will allow us to become one with ourselves again as well as Mother Earth from whom everything ultimately originates. They believe that humans can achieve similar states of being if they follow their own paths of spiritual awakening (please check also the best movies on Netflix about spiritual awakening) because everyone’s life journey is a unique one.