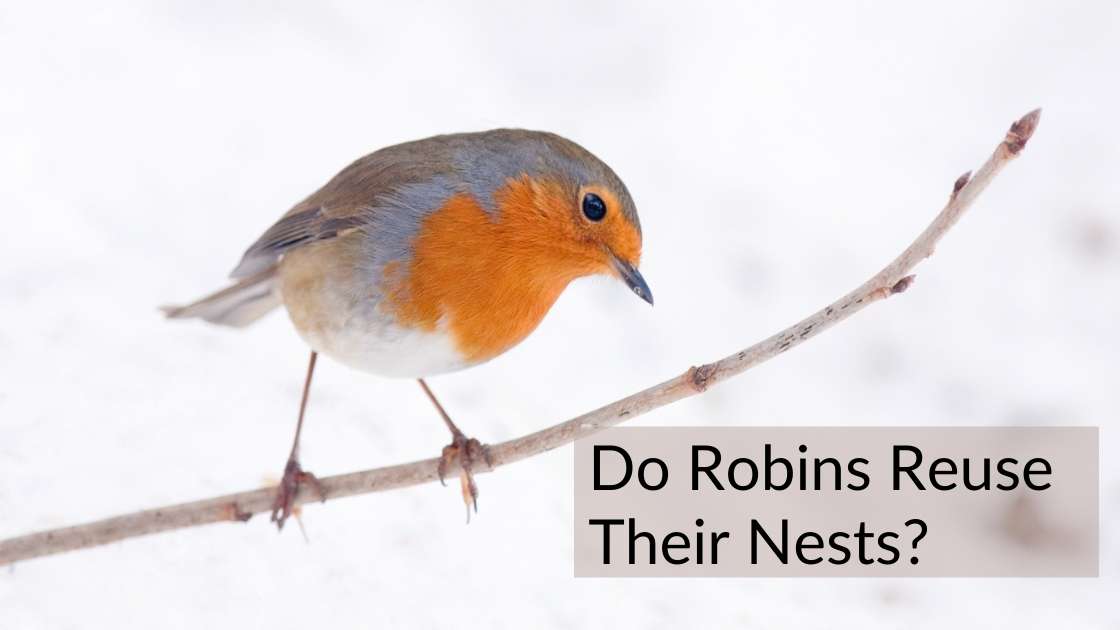 Do you have a robins’ nest in your house and are thinking about whether to throw it away or not? You may have heard of the birds reusing their already built nests in the next breeding season, but is that completely true? Will the mother robin use the same nest again, depending on various factors such as the condition of the nest, the success in raising the baby robins, the size and location of the nest?

It’s not uncommon for birds to build multiple nests in the same season and abandon them later on. Robins are one of these species who often use more than one nest during the breeding season, but they do this with good reason!

In this article, you will find if robins reuse their nests, whether you should remove their nests or not, how the parent robins raise their little ones and their hatching period.

Do robins reuse their nests?

Yes, some robins reuse their old nests again to raise their younger ones. This usually happens when the robins were unsuccessful in raising their babies. If they can raise healthy babies in the nests, they reuse the nest by building a new brood to lay the eggs. Some robins are known to dismantle the existing nest and use the twigs to build a new nest from scratch.

Robins have their own unique way of building their nests with grasses, twigs, and mud. They use one of their wrists to press down the grass and mud while building a circular boundary for the nest. The robins’ nests are 5 inches long and 4 inches wide. The nests are big enough to accommodate a tennis ball in them.

Should you remove the old nest of Robins?

Yes, you can remove the old nest of robins. There are some conditions for doing that, though. The nest should not have eggs in them. If you remove the nest of robins having eggs in it, the mother robin will not recognize the nest and will abandon the eggs. It should not be illegal to remove or destroy the nests of birds in your country or society. You should remove the nests of robins only if they are empty and are causing problems for you. If the nests are located at a place where they aren’t causing you any issues or disturbance, then it is good to host a robin bird and her eggs.

How and where do robins build their nests?

Robins build their nests using twigs, mud, and dried grass for the lining of the nest. The nests are located in places that offer full coverage like tree roots, hedgebanks, climbing plants, logs, and so on. They can be located at a height ranging from 5 to 25 feet above the ground. The nest is made in such a way that it lasts for a month and provides enough space for the growth of the baby birds and protects them against hot and cold. Sometimes the robins’ nests contain mosses and lichens as a construction material.

How often do robins lay eggs in one season?

American robins lay around 3 to 4 eggs in the first batch of the breeding season. In one breeding season that extends from April to July, robins lay eggs two to three times. The number of eggs laid in successive broods keeps decreasing. The mother robin lays one egg a day. She doesn’t sit on them until all the eggs of one brood are laid. This is the mechanism of the bird to start the development of all the eggs at the same time.

The mother robin incubates the eggs for around 12 to 14 days or until the babies in the eggshells hatch and comes out. The babies are fed by the mother and father robins together. The feces of the babies are contained in a fecal sac in the initial days.

After some days, the parent robins carry the fecal sacs in their beaks and drop them some distance away from the nest. This is done to prevent the predators from discovering the nests and the baby robins. The parents also make alarm calls to distract the approaching predators. When the baby robins hear the alarm calls, they go low in their nests so they aren’t easily visible to the predators.

After 13 to 14 days, the baby robins are full-grown and ready to leave the nest. They finally take their first flight and lead their way to the vast sky.

Do robins use the same nest year after year?

It’s not uncommon for birds to build multiple nests in the same season and abandon them later on. Robins are one of these species who often use more than one nest during the breeding season, but they do this with good reason! The first generation will occupy the original nest built by the female before she starts laying eggs. This way there is room for her offspring to grow after they hatch from their eggs – since robin females lay four or five eggs at once (depending on if there has been any infidelity). If successful, some young robins will remain and take over the nest after their parents depart, while others may not.

The second generation of robin babies born in a given year is often too small to build nests for themselves. If there is room in the original nest, they can’t help but return every spring because that’s where mama left them all those years ago when she abandoned it – remember? Some older siblings who have already found new homes might also come back to visit with their younger brothers or sisters and teach them how to catch insects on the fly (or caterpillars crawling). This is a very nice gesture from an older sibling! It ensures that young birds get enough protein before heading out into the world by themselves; something many other species don’t do.

The original nest will often be used and abandoned year after year, but this doesn’t mean it won’t change owners over the years! If there are multiple robin generations in a given breeding season (usually four to five), then the babies born last might not always have enough room for themselves when they get older. They may need to find someplace else to raise their young – like in an old fish or chicken bowl on top of someone’s porch that was never reclaimed by its owner… what a nice place for a baby bird’s first home! Of course, these nests can become occupied very quickly if other birds take notice and move into them too; giving each generation just enough space as needed without leaving anyone out to dry with

Robins don’t usually reuse their nests. But if the nests are located in extremely safe places, they are likely to be reused by the birds. They still make a new base for the nests. Robins look for concealed spaces to build their nests and protect their babies from predators. They also use alarm calls to distract the predators and signal their babies about potential danger.

If you’re interested in reading more about the Robin, check out The Robin Symbolism or the feather meaning of the robin.

We also compared the robin vs other birds: Oriole Vs Robin as well as Red Robin vs Cardinal.