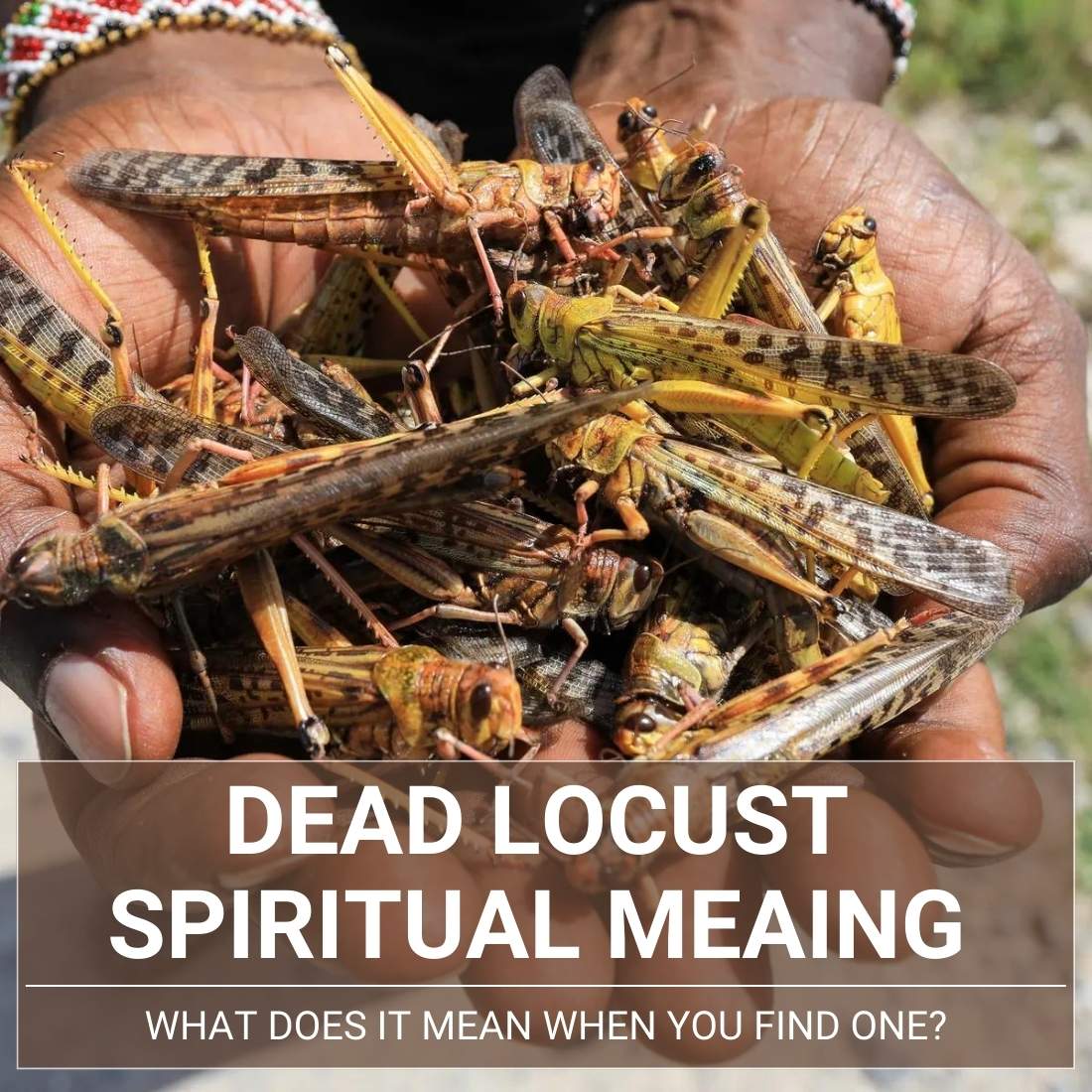 When you see a dead locust, what comes to mind? For many people, the first thing they think of is the biblical story of the plague of locusts.

People usually associate the dead locust’s spiritual meaning with scarcity, famine, and even death. It is a pest of Biblical proportions capable of causing irreparable damage to the crops. This devastating event happened in Egypt when Moses led the Israelites out of slavery. The Lord sent a swarm of locusts to destroy the crops of Pharaoh and his people.

In modern times, finding a dead locust may not have the same implications as it did in biblical times, but it still carries symbolism and meaning for many people. We can often read about the biological and behavioral characteristics of the locust. However, what could seeing one mean spiritually?

“The white man has settled like a locust over Africa, and, like the locusts in early morning, cannot take flight for the heaviness of the dew on their wings. But the dew that weights the white man is the money that he makes from our labor.”

Moreover, what does it mean when you find a dead locust? What does it say about you, your future, or your surroundings? Keep reading to learn the answers to these questions. We will take a look at what the Bible has to say. We will also dive into symbolism to better understand the spiritual implications of this fierce insect.

What does it mean when you see a dead locust?

A dead locust might not be hard to find, but it is rarely sought after. There is some special meaning hidden behind your ability to spot it and the fact that it was already dead when you found it.

Seeing a single dead locust usually means good luck. It signalizes that there will be an abundance of food in the future. Nature is your friend, not an enemy.

This locust can no longer cause harm to anyone. Locusts thrive in areas with excessive amounts of rainfall after long periods of drought. These circumstances create the perfect storm. You should feel lucky for seeing only one lifeless locust. This shows that you live in a well-balanced environment with a mild climate.

Just like the locust symbolizes destruction, a dead locust symbolizes peace. You are approaching a more peaceful stage in your life. In this stage, you may decide to settle down, grow a little garden, and enjoy God’s creations. You might not become the wealthiest person in the world, but you will have enough not to feel short of anything.

Locus as a spirit animal

The fact that you were able to spot this tiny dead locust shows how attentive and open to spiritual signs you are. You have an eye for details. You appreciate nature and recognize the importance of even the smallest creatures. Those are all traits that make you a better person.

The spiritual message behind the dead locust is closely related to its way of life and natural behavior.

The real power of the locust lies in its ability to communicate and bond with other locusts. Only in a group can the locust find the best source of food and living conditions. This BBC Earth video shows how majestic swarms of locusts are when working together as one.

Therefore, a single dead locust could symbolize isolation from your friends or family. People, just like locusts, are very sociable creatures. When we find the right group of friends, we feel safe and can thrive. Loneliness is rarely good for anyone. This dead locust you stumbled upon should be your reminder to keep your friendships alive.

The locust has a superpower of growing at will. Once it gets the information that the weather conditions are right and there is plenty of food, it can physically speed up its growth. It will reach full maturity and lay eggs long before its time.

The locust may have not lived long, but it probably lived an intelligent and fruitful life. The spiritual message could be not to focus on when or how we die, but on how well we have lived. In simplest terms, we should work smart and not hard, and focus on the quality not the quantity of the days.

Similarly, its eggs may stay underground for years, waiting for the best conditions to hatch. If you are living through your personal storm, be patient. Do not rush your decisions. Good things take time.

Dead locust meaning in the Bible

The locust is used in several passages in the Bible. It is a recurring symbol of punishment or threat, but it also teaches the importance of unity.

God uses this insect to threaten the non-believers. It is the eighth of ten plagues that God cast on Earth to punish the Egyptians for disobeying His orders. In Exodus 10:4, God says, ‘For if you refuse to let my people go, behold, tomorrow I will bring locusts into your country.

Once unleashed, the locusts are able to show the true wrath of God. Exodus 10:15 says Nothing green remained on tree or plant in all the land of Egypt. They are a force to be reckoned with. Once the insect storm passes, and the locusts have taken over the people’s sources of food and income, the real torture begins.

In Proverbs 30:27, the locusts are described as one of the four wisest creatures on Earth by saying locusts have no king, yet they advance together in ranks. This shows the power of solidarity and harmony. Regardless of how small and seemingly unimportant the creatures are, if they come in great numbers with the same goal, nothing will be able to stop them.

The dead locust spiritual meaning is an unlikely source of fear and wisdom, but it is arguably the best. We should not fear what is overtly dangerous and scary, but we should fear the little things, that come slowly, but surely and take over our lives.

“The four horsemen of the prairie are tornado, locust, drought, and fire, and the greatest of these is fire, a rider with two faces because for everything taken, it makes a return in equal measure.”

Dead locusts in dreams could have different meanings depending on the context. If you dream of a dead locust, it could symbolize feelings of isolation or loneliness.

Alternatively, this dream could be interpreted as a sign of patience. Perhaps you are going through a tough time and the dead locust is telling you to be patient, good things take time.

To see a swarm of locusts in your dream could represent feelings of being overwhelmed or hopelessness. Alternatively, this dream could be interpreted more positively as a sign of unity and solidarity.

To kill a locust in your dream might represent taking back control of your life from something that has been overwhelming you. Dreams about locusts are often symbolic and should be interpreted based on your own personal experiences.

A dead locust can cause neither harm nor offer any substantial benefit. However, it can teach us invaluable lessons if we are open to learning.

First, there is life and death in the most unexpected places. We may find the purpose of life in the smallest things. We should stay attentive to the spiritual messages, and just like the locust, grab every opportunity and devour every little thing life has to offer.

Second, we should remember the importance of having a social group. The power of the locust lies in its ability to swarm. A single locust is as powerless as any other insect. We should strive to find those we can truly call our own. Creating our personal swarm will lead us to better choices and quality of life.

1 thought on “Dead Locust Spiritual Meaning And Symbolism: What Does It Mean When You Find One?”