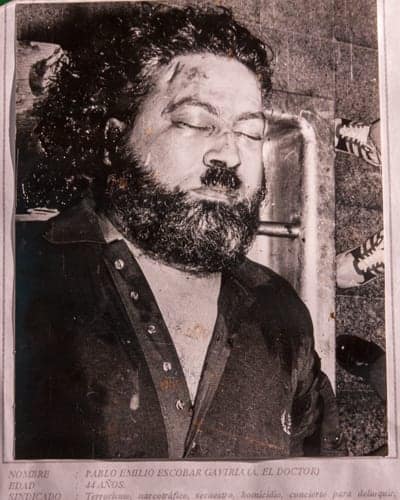 Escobar had a way of dealing with his enemies: he called it “plata o plomo”, literally, silver or lead. Usually, if a politician, judge or policeman got in his way, he would first attempt to bribe them, and if that didn’t work, he would order them killed, occasionally including their family in the hit. Escobar: “The essence of the cocaine business was “simple – you bribe someone here, you bribe someone there, and you pay a friendly banker to help you bring the money back.”

In 1987 Escobar was the seventh-richest man in the world – working hard to cultivate his “Robin Hood” image, and frequently distributed money to the poor through housing projects and other civic activities, which gained him notable popularity among the poor in Colombia.

Pablo Escobar had a peak net worth of $30 billion dollars during his lifetime. When he was alive, Pablo Escobar ran of of the most infamous and violent drug cartels in history, The Medellin Drug Cartel. At the peak of its power, the Medellin cartel distributed 80% of the world’s cocaine market.

When Pablo was alive and his cartel was thriving, he employed ten accountants to help launder hundreds of millions of dollars in illicit currency. He reportedly spent $2500 a month just on rubber bands to wrap all the money. That’s enough to buy 250,000 rubber bands every month. Because much of the money was being stored in basements and walls, Pablo was supposedly forced to write off $500 million in cash every year due to spoilage. Spoilage could include water damage and fires, but more common was starving rats that ate the money thinking it was food. At one point while Pablo was on the run, he offered to payoff Colombia’s entire national debt, totaling more than $10 billion, if they passed a law to make extradition illegal.

In the years immediately following Pablo’s death, life got complicated for Maria and her children. Under constant fear of retaliation from her husband’s former associates, Maria wanted to flee Colombia. Unfortunately, the police had raided their house and seized all of the family’s assets, leaving them broke. With little money, and no countries eager to take them in, it was difficult to gain sanctuary. Eventually, after months of effort, she was able to secure entry into Mozambican for all three in 1994. Though she longed for a stable home, Pablo’s reputation followed the family everywhere they went. Maria was forced to constantly flee from place to place to keep her family safe, often changing her name in the process. Her children, too, changed their names: Juan became Sebastian Marroquin and Manuela became Juana Manuela Marroquin Santos.